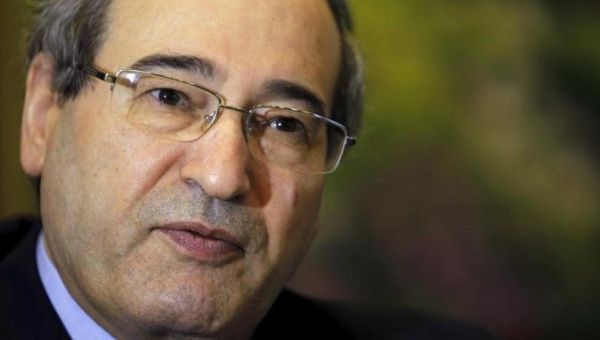 __________
TeleSUR
Syrian Ambassador: Zionism is Attempting to Divide the Region

Syria’s Deputy Foreign Minister Fayssal Mikdad and Iraqi Ambassador Said Mohammed Rida have said that the war to divide Syria and Iraq serves Zionist aims, and accused the U.S.-led coalition of operating in a manner that hampers efforts to fight terrorism in the region, Syrian news-agency SANA reported.

“Israel is the beneficiary of the division of the countries in the region,” Rida said during a meeting with his Syrian counterpart.

Mikdad accused the United States of attempting to hamper efforts to fight terrorism by targeting Syrian government forces, in order to further divide the region. He said that they decieve the world by claiming to be fighting terrorism in the region, while attacking the very forces that are fighting extremist groups.

The two ambassadors agreed that bilateral cooperation has been and would continue to be essential to preserve the region against destabilizing threats. Following the meeting, they signed an agreement to eliminate visa requirements for diplomatic, service, and mission work between their countries.

“There is no choice for Syria and Iraq except to have victory over terrorism,” Mikdad said.

Syria and Iraq have both made significant gains against combating terrorist groups operating in the region, such as the so-called Islamic State group, along with assistance from Russia and Iran. Syrian forces are currently making rapid advances in the province of Deir al-Zur.