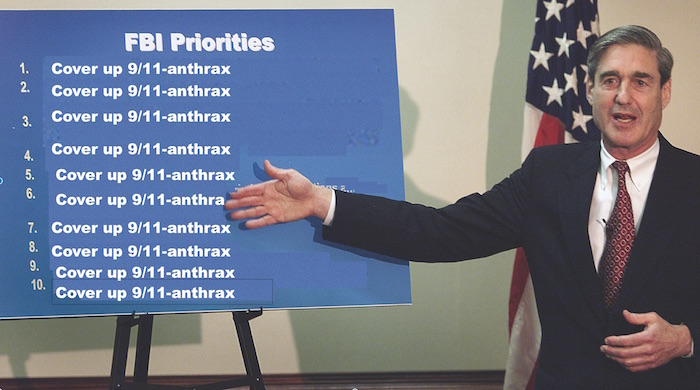 Will President Donald Trump blow the 9/11-anthrax case wide open – and turn the tables on his “Special Persecutor” Robert Mueller?

Mueller has assembled a turbo-charged legal team to go after Trump. We learned this week that Mueller already has mobilized 16 of the nation’s most high-powered and well-connected legal pit bulls for his “get Trump” operation, with more pit bulls on the way. 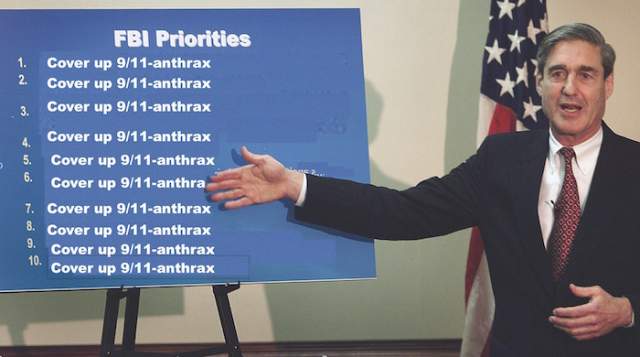 Can Trump fend off Mueller’s furious assault? Lawyers for Trump co-founder David Noble, who is in communication with people close to Trump, has urged the President to re-open the 9/11-anthrax case. This would put Mueller squarely in the cross-hairs of the most explosive investigation in human history.

Robert Mueller was appointed FBI Director exactly one week before 9/11. He presided over the FBI cover-up of 9/11, which included:

*Barring the NTSB from carrying out its legally-mandated duty of investigating the four alleged crash sites.

*Confiscating videos of the Pentagon attack just minutes after the event.

*Covering up the biggest foreign espionage operation ever mounted in the United States – the Israeli pre-9/11 operation that included hundreds of “art students” swarming secure US military and law enforcement facilities and blanketing the future “9/11 hijackers.”

*Failing to investigate then-Solicitor-General Ted Olson’s proven lies about allegedly receiving a call from his wife Barbara from “hijacked Flight 77.” (The FBI has certified that Olson lied – it officially states in court documents that the only attempted call from Barbara’s cell lasted “0 seconds” i.e. it failed to connect.)

These and hundreds of other examples prove that top FBI officials, with the complicity of Mueller, were tasked with covering up 9/11.

But perhaps the most obvious and easy-to-prosecute FBI coverup crime is Mueller’s quashing the investigation of the post-9/11 anthrax letters, which the US government officially admits were part of a false flag operation, mounted from within the US biowarfare community, to falsely implicate Muslims and incite hatred and warfare against them.

The best resource on the anthrax element of 9/11-anthrax is Professor Graham MacQueen’s book The 2001 Anthrax Deception. MacQueen and other investigators show that the original FBI team assigned to the case conducted an honest investigation and discovered that the anthrax was ultra-weaponized US military material developed by Battelle Laboratories in a secret CIA program run out of Dugway Proving Ground in Utah. These honest FBI agents ruined the original plan of the 9/11-anthrax criminals, who wanted to cast the attack as a joint Saddam-Bin Laden 9/11-followup operation using low-grade foreign (not weaponized US government) anthrax.  Mueller responded by dismissing the honest agents and replacing them with a corrupt team that ineptly maintained a fallback “limited hangout” cover story. As Barbara Honegger writes:

William Patrick, a former top bio-scientist at Ft. Detrick and close colleague of former Giuliani OEM Director Jerry Hauer, was the mentor of initial FBI ‘person of interest’ in the anthrax attacks Steven Hatfill. Patrick holds five classified patents and trade secrets, including on how to hyper-weaponize anthrax to the 1 trillion spores per gram contained in the letters mailed to Democratic Congressional leaders Senators Daschle and Leahy (1). After leaving Ft. Detrick, he was contracted by Battelle to research and write a report on how mailed letters could be used as the vector for dispersing weaponized anthrax. (13)  On Sept. 9, two days before 9/11, Battelle contractor DIA announced the ‘success’ of Project Jefferson’s anthrax hyper-weaponization program. Following the Sept./Oct. 2001 letter mailings, some of which were reported to contain anthrax at 1 trillion spores per gram, a footnote in Patrick’s report stating that “We have now arrived at the point where we can purify [anthrax] to the extent of 1 trillion spores in a gram” was removed from publicly available copies. (2)      William Patrick worked with his close colleague and friend, former Soviet bio-weapons expert Ken Alibek, at Battelle, which also ran Project Clear Vision, a secret CIA program to reverse engineer dry-powder anthrax bombs produced by the former Soviet Union. Patrick and Alibek were the FBI’s first suspects in the anthrax attacks, but the initial FBI investigative team was taken off that focus and replaced by a new team that diverted attention to Hatfill. Director Mueller himself assured a Senator that the FBI “was not investigating, nor intending to investigate, anyone with, or formerly with, BMI [Battelle].” (3)  Battelle is also a contractual partner with BioPort and Scientific Applications International Corporation (SAIC), and directs the anthrax production and experimentation program at the Army’s Dugway Proving Ground in Utah, the second ‘home’ in addition to Ft. Detrick of the Ames strain contained in the letters. (9/11 suspect Jerome) Hauer and Hatfill worked together at SAIC. (4)
1 http://www.strike-the-root.com/columns/rarey/rarey3.html; “Terror Anthrax Linked to Type Made by U.S.,” by William Broad, New York Times, Dec. 3, 2001.
2 Ibid. (Broad, New York Times, Dec. 3, 2001).
3 http://www.worldnewsstand.net/news/anthrax.htm
4 www.tetrahedron.org/articles/anthrax/open_letter_mueller.html;
www.tetrahedron.org/articles/anthrax/anthrax_espionage.html  Jerome Hauer — managing director of Kroll and senior adviser to US Secretary of Health and Human Services (HHS) for National Security and Emergency Management on 9-11; put John O’Neill at the WTC on 9-11; lied to Dan Rather on CBS News on 9-11 about the controlled demolition of WTC buildings; director of Giuliani’s Office of Emergency Management from 1996 to 2000

Will Trump use his “Samson Option” and demolish the Deep State at free-fall speed before it demolishes him?

I am not a fan of Donald Trump. But if he were to re-open and solve 9/11, thereby putting the US and the world back on the right track,  he would deserve a place on Mt. Rushmore.