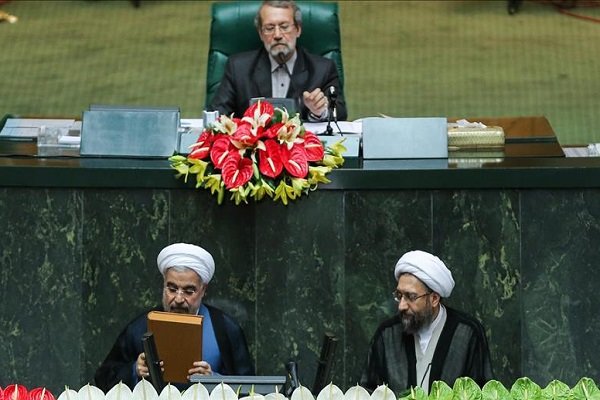 TEHRAN – In a high-profile ceremony on Saturday, Hassan Rouhani was inaugurated as the 7th president of the Islamic Republic of Iran.

Rouhani vowed to usher in a new era that would bring about a stronger economy and more cooperative foreign policy.

The swearing-in ceremony was held on 17:00 local time (13:30 UTC), in which a cavalcade of international dignitaries, including European Union foreign policy chief Federica Mogherini, participated.

“From now on, we must be responsive to the people’s votes,” Rouhani told hundreds of guests gathering in the parliament.

“The (May 19) vote was not happenchance. It was the outcome of social maturity. We are a pacifist government preferring peace over war and reform over stagnancy in our domestic and foreign policies.”

Facing a strong challenge from principlist Ebrahim Raisi at the May 19 presidential election, Rouhani ultimately managed to secure more than 23 million (57%) of the votes, winning the election in a landslide.

“I hereby as the president of the Islamic Republic of Iran, swear before the holy Koran and the Iranian nation and God to be the guardian of the official religion, the Islamic Republic, and the Constitution,” Rouhani said as he took the oath of office.

According to ISNA, the ceremony was attended by some 1200 guests, including 700 senior Iranian officials and 500 prominent officials from other countries.

The inauguration fell on the 111th anniversary of the Iranian Constitutional Revolution of 1906, which gave the people of Iran, for the first time in the Middle East, a constitution and a parliament.

Rouhani reiterated his political posturing he pursued over his first term, maintaining that his government “wants to be one of moderation, one which would not succumb to any aggression or be upset by any excitement.”

Elsewhere in his remarks, Rouhani referred to the international nuclear deal between Iran and six world powers, emphasizing that the Iranian nation and government won’t keep mum on possible infractions.

“The world knows that any violation of the international accord would face the united reaction of the nation and government of Iran.”

“On behalf of the country’s people and authorities, I explicitly announce that the Islamic Republic of Iran would not violate the JCPOA first, but would not keep silent in the face of America’s continuous incompliance.”

The 68-year-old re-elected president alluded to provocative comments by U.S. President Donald Trump on tearing up the nuclear agreement, urging him to end his “mistakes.”

The JCPOA was inked between Iran and the five permanent members of the UN Security Council – the US, France, Britain, China and Russia – plus Germany in July 2015 and took effect in January 2016.

Under the deal, which was later endorsed by a UN Security Council resolution, limits were put on Iran’s nuclear activities in exchange for the removal of all nuclear-related bans imposed on the Islamic Republic, among other things.

The Trump administration, which took over in January 2017, one year after the JCPOA came into force, has, however, slapped sanctions on Iran in violation of the nuclear deal. During his presidential campaign, Trump said he would “tear” the deal.

“Those who intend to tear up the JCPOA should bear in mind that in doing so they put an end to their political life. Those who consider themselves to be losers in the deal can end their mistakes,” Rouhani stated.

He added, “Today, it’s not time to unveil the mother of bombs. Time is ripe for unveiling mother of all cooperation.”

Rouhani was referring to the largest non-nuclear bomb of the U.S. Army dropped in eastern Afghanistan in April.

Rouhani also rapped Washington for what he called “addiction to the illegal and ineffective policy of intimidation and sanctioning.”

As concluding remarks, Rouhani deemed Tehran’s constructive interaction with all countries, including the neighboring ones, a “necessity” for international peace and security.

“Leaving behind dangerous threats and convoluted developments in the present transition era is not possible unless interaction between nations and governments are increased and dialogue is institutionalized.”

The inauguration ceremony comes after formal endorsement of Rouhani by Leader of the Islamic Revolution Ayatollah Ali Khamenei.

In his decree, Ayatollah Khamenei wished for Rouhani’s success, saying: “I hereby, in conformity with the choice of the Iranian nation, endorse their vote and appoint esteemed scholar, Hojjatoleslam Dr. Hassan Rouhani, as president of the Islamic Republic of Iran.”

The Leader also hailed the election process as the symbol of democracy in the post-Revolution Iran.

Prior to the Islamic Revolution, people were sidelined and prevented from playing a role in running the country’s affairs, Ayatollah Khamenei noted.

“Focus your efforts on the establishment of justice, supporting the oppressed people, implementing the pure commands of Islam, reinforcing national unity and dignity, paying attention to the huge capabilities and potentialities of the country, and outspokenly venerating the values and principles of the Islamic Revolution,” the Leader told Rouhani.