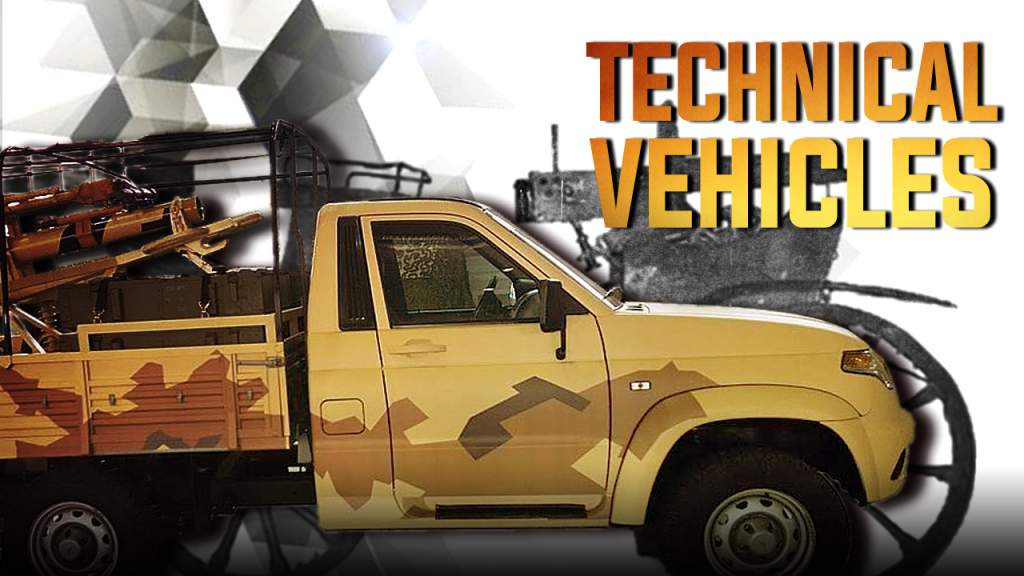 One of the iconic weapons of the Russian Civil War was the tachanka–a light wheeled carriage pulled by a team of horses and mounting a Maxim heavy machine-gun, which was a weapon system ideally suited to the wide open spaces and low troop densities of that conflict. Tachankas were used by virtually every combatant in that conflict to provide mobile direct fire support to infantry and cavalry formations.

After the war, with the Red Army ultimately becoming a regular force well equipped with modern weapons, the tachanka vanished from its arsenal. However, decades later, it was reincarnated as the “technical”–a 4-wheel drive pick-up truck mounting a heavy machine gun, automatic cannon, or even a multiple rocket launcher–for use in the brushfire wars of Africa where once again the conditions of the Russian Civil War obtained.

Once the wave of regime change had swept over the Middle East, it was inevitable that the “technical” would see extensive use in those wars. Indeed, the fleets of brand-new, customized Toyota Hillux trucks became indelibly associated with ISIS during its triumphant advances across Iraq and Syria.

Their usefulness in that conflict was, again, due to the conditions prevalent in the theater of war: low troop densities and open terrain favoring mobile operations. Even airpower was not an effective countermeasure against this veritable desert light cavalry. ISIS mastery of this method of warfare became particularly evident in its recapture of Palmyra in 2016, when it was able to hit the extended salient from several directions and at many points, thus collapsing the Syrian defenses. The light truck-mounted ISIS units also proved effective at thwarting offensive operations by harassing the vulnerable lines of communications of heavy mechanized forces.

With time, however, the Syrian Arab Army (SAA) and its Russian advisory forces have developed effective measures against ISIS tactics, in part by creating similar forces themselves. The Russian military has gone so far as to organize one battalion of the newly formed Samara-based 30th Separate Motorized Rifle Brigade of the 2nd Guards Army in the Central Military District as a force equipped mainly with the 21st century version of the tachanka, the UAZ-3163 Patriot.

The Patriot is an extended-cab 4-wheel drive light truck with a cargo bed optimized for mounting heavy crew-served weapons such as the Kord 12.7mm machine-guns, AGS-30 automatic grenade launchers, and Kornet ATGMs. In addition, the “tachanka” battalion is equipped with man-portable 82mm mortars. While the rest of the brigade has the standard equipment of BTR-82A APCs and T-72B3 tanks, its artillery is limited to towed 122mm D-30 howitzers, which suggests the entire brigade is intended to be trained for low troop density desert warfare mission. Reports from exercises indicate the brigade artillery is working out techniques for dealing with highly mobile enemy light truck forces.

The reliance on light trucks, wheeled APCs, and truck-towed medium howitzers also gives the unit the combination of strategic and operational mobility. Other than the tanks, all of its weapon systems could be rapidly airlifted into a conflict zone in a manner only the VDV could match. However, the predominantly wheeled mobile platforms of the brigade mean that, unlike the BMD-mounted VDV units, the 30th Brigade would have considerable operational mobility once in the conflict zone. The tracked vehicles’ advantage in tactical mobility was not felt nearly as strongly in the Syrian theater of war due to the terrain favoring wheeled vehicles even when moving off-road.

The permanent establishment of a force which appears to be custom-designed for the conditions of modern desert, and possibly also steppe, warfare, suggests the Russian military is not viewing the Syrian conflict as a unique experience that is unlikely to repeat itself. There are other ongoing conflicts in which Russian forces may yet be called upon to influence, including Iraq and Libya. Moreover, the uncertain future of Afghanistan and ISIS emergence in that region means that the states of Central Asia are in danger of becoming theaters of war themselves. There are enough citizens of those states fighting in the ranks of ISIS and other Islamist forces in Syria to make that threat quite plausible. Having a force that is capable of switfly and decisively intervening in that kind of environment is the best guarantee of nipping any 21st century version of the “basmachi” in the bud.