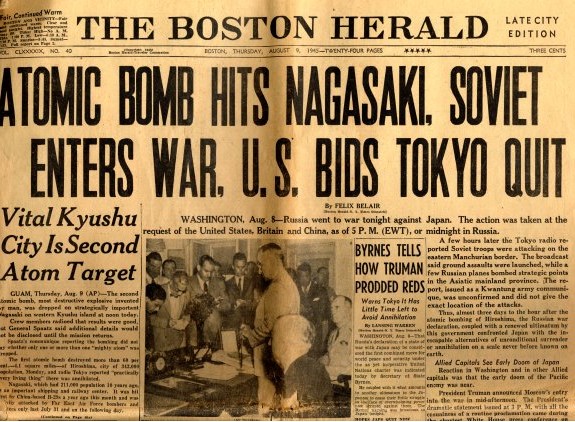 The atomic bombing of Hiroshima and Nagasaki in 1945 is still generating serious discussion globally seven decades after more than 200,000 Japanese citizens were killed during the US nuking of the two cities.

The mantra that the bombings were conducted to force Japan into surrender and prevent further killing and destruction, and that it was a proportionate response to the Imperial Japanese Navy’s attack on Pearl Harbor is being disputed, and many strong arguments are being made in denial of that credence.

A Japanese political consultant tells Fars News Agency that the dropping of atomic bombs on Hiroshima and Nagasaki was a “human experiment to gather scientific data.”

“It was a human experiment to gather scientific data. It aimed to make mass experiments of the uranium bomb on Hiroshima and the plutonium bomb on Nagasaki to test humans and to obtain data for the development of nuclear weapons,” said Yuki Oikawa in an interview with Fars News Agency.

Mr. Oikawa believes that the Japanese were ready to surrender before the nuclear attacks took place, and historical evidence shows the American leaders were aware of Japan’s readiness to admit defeat unconditionally.

A political consultant and commentator, Yuki Oikawa has had a distinguished career with appointments in diverse financial, religious and political positions. He has commented and written on the Japanese politics, Japanese-American relations, China’s politics and human rights and environmental issues. He was recently named head of the Institute for Research in Human History (IRH), a think tank of modern history research.

He also serves as director of foreign affairs for the Happiness Realization Party (HRP) of Japan.

Q: Mr. Oikawa; as a political consultant, and more importantly, as a Japanese citizen, what’s your feeling towards what happened about 70 years ago to thousands of your fellow citizens? About 220,000 Japanese civilians were killed during the first use of atomic weapons in thehistory of warfare. How did that terrible incident affect the Japanese society, the psyche of the Japanese people and the mentality of the future generation?

A: Japan was occupied by the allied and US from 1945 to 1952. During the period, Japanese people were educated the history that Japan made a war of aggression and killed so many, and then the allied [and] US dropped the atomic bombs in order to stop the war; otherwise, much more Japanese would have died. This is what we learned at school. And this education created a biased mentality, which is called the “masochistic view of the own history.”

The masochistic view lost the love for the country and faith in God. In other words, people in this country became negative on Japan’s future. Instead, they focused on seeking the individual success.

Prime Minister Yoshida, at the time of the occupation of Japan, made a decision on simply developing the economy and totally depending upon US for protecting Japan. His policy led to the formation of one of the largest world’s economies.

However, because the people have been keeping a negative mentality on Japan’s future, they had not enjoyed the success of the economy. As Japan lost the success in the 1990s, the people are still suffering from more than 20 years of recession. It is said that Japanese people’s mentality is manifested in the form of a failure of economy.

Prior to the 70th anniversary of the World War II, the public was gradually realizing that the Japanese people had been brainwashed by the education system that was set up at the occupation, making them to be conservative.

Q: There have been many documents and memos confirming the unfair treatment of the Japanese soldiers and civilians by the invading American forces, including the raping of women, killing citizens and selling their skull for about $35 among merchant marines, verbally offending the children and adolescents being taken as captives, etc. The US Army General Jacob H. Smith ordered his soldiers upon the start of the Philippines War, “kill everyone over 10 years old.” Why did the American forces take such an attitude and treat the Japanese, Koreans, Filipinos and Vietnamese as second-rate creatures?

A: I have the experience of researching the troubles and accidents caused by the members of the US occupation army. It is true that as you said, there were much evidence of their brutal actions. I found that not all were real, and the Japanese left-wings such as socialists and communists fabricated them. But still there are many civilian victims who suffered from American’s violence.

I think that the Americans acted in these unacceptable ways in the Asian countries based on the Western idea of racial discrimination, and this is the underlying reason why Japan began the war against Europeans and Americans.

It is impossible for the advanced nations to order “kill them all,” because most of the Westerners are Christians. But it is possible if they accept the idea of white supremacy. That’s why US developed the first atomic bombs and then used them in Japan, not in Germany.

And I think that the Americans were very much afraid of the Japanese because they experienced the fiercest battle in their history against Japan.

Q: Some conservative American pundits and experts opine that the bombing of Hiroshima and Nagasaki was necessary, and the killing of some 220,000 Japanese citizens was not something significant, because far more citizens were killed during such attacks as the US bombing of the German city of Dresden. Is it really that civilian lives are sometimes undervalued and taken too lightly by the US government during the wartime?

A: I am not the right person to answer this question because I am not the specialist of US politics but I can confirm that US government conducted a human experiment by using people in Hiroshima and Nagasaki for the purpose of the further development of the nuclear weapons.

Let me explain how the Japanese people view and understand US atomic bombing in Hiroshima and Nagasaki 70 years ago. Most of the Japanese people believe that the purpose of the atomic bombings is to force Japan to surrender, and US-Japan War – the Pacific War, was a bad war. Japan committed many war crimes during the war period. Japan must reflect on its own behaviors.

However, now as of the 70th anniversary, people ask themselves, “did the US need to drop atomic bombs on Japan?” The questions that remain, and can never be resolved, are whether the bombings were necessary or not. The new issue is whether the use of the bomb was necessary to force Japanese into surrender.

Since the new evidence of the history has become available, it’s clear that Japan was ready to surrender before the bombs were dropped. Japan had long ago decided to surrender unconditionally – and the Americans knew that. On July 20, 1945, General Eisenhower reported this to President Truman. It means that the US and Allied powers had some motivations behind the dropping of atomic bombs.

It was a human experiment to gather scientific data. It aimed to make mass experiments of the uranium bomb on Hiroshima and the plutonium bomb on Nagasaki to test humans and to obtain data for the development of nuclear weapons.

And, killing over 200,000 civilians, mainly elderly people, women and children, must be a war crime and a serious violation of international law. It wasn’t the atomic bombs which caused Japan to surrender. From the recent studies in Japan, one can say that it was the Soviet Union’s invasion of Japan that caused it.

A: I just experienced what you said in this question in my joining US radio shows in this month. I talked with the radio show hosts in twelve radio stations just after the 70th anniversary of atomic bombings in Hiroshima and Nagasaki. I made the comments in my answer to one of your previous questions in the shows and all hosts agreed. That was not my expectation. And I felt that they no longer kept closing their eyes to the historical facts even if it is not convenient for them.

I emphasized that we should avoid the emotional arguments and calmly analyze the facts of history in the radio shows and all of the hosts strongly agreed.

Q: There are conventions and treaties which ban the possession and deployment of chemical and biological weapons; however, the Nuclear Non-Proliferation Treaty doesn’t have any stipulation on disarmament, nor does it expressly ban the use of nuclear weapons. There are currently 9 countries that possess nuclear weapons, including four states that never ratified or signed the NPT. Is it possible to devise any legally binding framework to compel these nations to abandon their nuclear weapons?

A: As an individual of the only nation which experienced atomic bombing, the current legal frameworks of banning the nuclear weapons are not real.

My desire is that not only a legal framework, but a spiritual framework can pave the way for the decreasing of the nuclear weapons naturally by sharing the common values beyond nationalism, racism, and religion. I mean I cannot find any other ways, because the legal, political and social efforts have already failed.