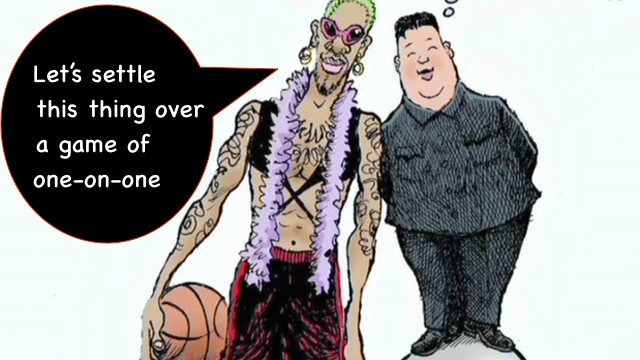 Here at VT, we try very hard not to say “told you so” every time Trump demonstrates his unbelievable unfitness for office. But will we be able to restrain ourselves while crawling out of radioactive rubble?

Quite a few VT readers – including some of my favorite radio guests – actually voted for Donald Trump. You know who you are.

You thought Trump was the “peace candidate.”

As US News recently and accurately reported, “Peace candidate” Trump has massively ramped up US militarism worldwide. It is increasingly obvious to the world that  The Madman With Nuclear Weapons is Donald Trump, Not Kim Jong-un.

America’s first genuinely imperialist president, Teddy Roosevelt, said: “Speak softly, and carry a big stick.” Trump does the exact opposite: He rants like a lunatic, at the top of his voice, with his stubby little fingers wrapped around something you could barely even call a twig.

The prez is a blathering bundle of bombast and balderdash, endlessly emitting shrill, ear-splitting yaps and yowls aimed at obfuscating and obscuring his all-too-obvious ego issues. He is the only leader on earth who, by way of comparison, makes Kim Jong-un look like a sober statesman.

This is the guy who’s going to lead us into the next big war?!

It makes you want to take Dennis Rodman’s approach one step further, and apply for political asylum in a relatively sane country, like North Korea.