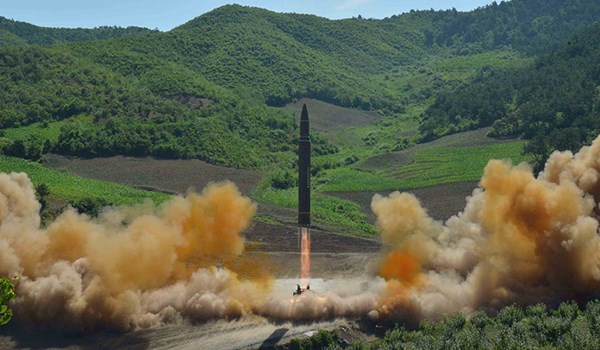 US Defense Secretary James Mattis has warned North Korea risks a course of action that “would lead to the end of its regime and the destruction of its people.” He insists North Korea needs to immediately “stand down.”

This comes in the context of President Trump threatening “fire and fury unlike the world has ever seen” against North Korea for its behavior. Trump followed that up Thursday insisting America’s nuclear weapons are better than ever, and that they are the “most powerful nation in the world” and always will be no matter what. Mattis, for his part, has accused North Korea of being to blame for everything, demanding that the state “stop isolating itself,” as US officials continue to impose new sanctions and threaten a massive war against them.

North Korean officials have downplayed the situation, though their state media has suggested they are developing a plan that would involve attacking the US island of Guam, and raising the possibility of a “preemptive strike” on the US if they believe an attack is imminent.

The US, of course, has constantly threatened their own preemptive strikes against North Korea for years now, and those threats have only grown. This inevitably raises concerns that one side or the other is going to blink first and jump headlong into a calamitous war”

Even before the imposition of new sanctions on North Korea – as well as Iran and Russia – by Donald Trump and the ongoing fuss over North Korean missile tests undermining American security, North Korean-American relations had deteriorated to a level not seen since the 1960s. Why?

The US has many ideological disagreements with North Korea. North Korea has no capitalist economy and is not on good terms with the US on regional issues. North Korea is also much weaker than the US – its population and territory are smaller than those of the US, and its economic and military might have been considerably diminished, so it poses much less of a threat to the US.

However, Trump rhetoric and actions towards North Korea are much more belligerent now than during the 1990s, or in the 2000s, when the US imposed sanctions against Pyongyang after it dropped out of a fragile nuclear disarmament agreement with US and began testing new missiles capable of carrying nuclear warheads. Even when President Obama was calling North Korea a threat, relations did not deteriorate as much as in recent months under the Trump administration.

Bilateral economic relations have taken a similar turn for the worse. In fact, there is none. North Korean-US trade has never been there, nominally dropping nearly to zero in two decades, even before the current standoff. After all, North Korea is not a market economy, and also ‘communist’. Geopolitics?

One popular explanation is geopolitical considerations. It is argued that when a hostile power tries to expand its influence, the US, the rest of the West and hence, NATO respond strongly. Examples cited include the Cold War in the 1950s and 1960s with Russia, and sanctions against the Soviet Union after it invaded Afghanistan in 1979. The same could be said about more recent Western sanctions in response to Iranian military successes against terrorists in Iraq and Syria or Russian advances in Crimea, Eastern Ukraine and Syria.

Here, the US position is not primarily determined by either ideology or geopolitics, but rather, by the changing US establishment view of the balance of power. After the devastation of the Second World War, the USSR was hardly a superpower, so the US expected to press the USSR, its erstwhile ally, into submission through the Cold War.

But the Soviet Union began closing the gap with the United States in terms of productivity, per capita income and military strength in the 1950s and 1960s. Even though its economy slowed from the mid-1960s, the USSR had caught up in many respects, enough to qualify as the other superpower. The result was détente. Although the USSR had been offering rapprochement after the Second World War, the US only accepted detente in the 1970s, as the military gap closed.

The strategic conclusion appears to be that North Korea can be contained via direct pressure and sanctions, something unthinkable against the communist USSR in the 1970s or China today.

Economically and militarily, North Korea is relatively much weaker today than the USSR was. But its capacity has recovered considerably in the new century from the 1990s; meaning, the current effort of pressing North Korea into submission has risks.

True, North Korea is relatively weaker today, but it still has tremendous destructive capacity. One only has to remember that North Korea, with much less military capacity, has successfully withstood US pressure for decades. That said, as US economic dominance in the world has been eroding for some time, and its military superiority is the main source of US advantage, the temptation will remain to use this superiority before it is eroded as well.

US pressure on North Korea can result in a stand-off comparable to the 1962 Cuban missile crisis, with North Korea willing to risk everything and even attack Guam – even though its military capability is well behind that of the US. Eventually, not only will North Korea missiles stop pointing their directions towards Guam, a return to the status quo in the Peninsula and the US willing to stop threatening to invade Pyongyang with “fire and fury” will occur.