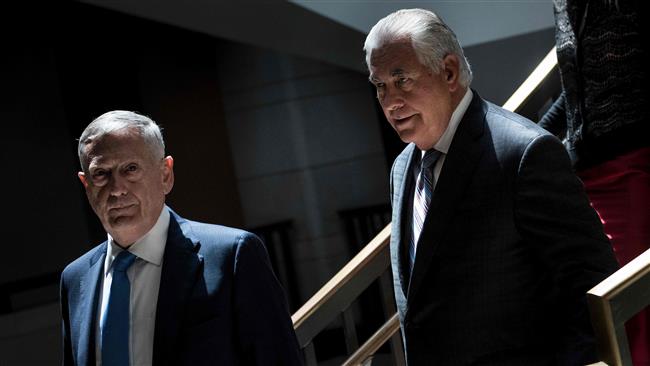 The heads of US State and Defense Departments, Rex Tillerson and James Mattis, say they are pushing for a “peaceful pressure campaign” on North Korea, breaking with President Donald Trump who has warned Pyongyang of “fire and fury” amid an ongoing standoff.

“The US is willing to negotiate with Pyongyang,” the two secretaries wrote in a Wall Street Journal article published Sunday.

Mattis and Tillerson, however, failed to clarify the Trump administration’s stance and rather added more spins to an already complicated situation.

The two officials called their approach “strategic accountability” and touted it as a replacement for past administrations’ “failed policy of ‘strategic patience,’ which expedited the North Korean threat.”

Mattis and Tillerson also spoke of a peaceful pressure campaign, seeking the “denuclearization of the Korean Peninsula” without harming the people living there.

“We do not seek an excuse to garrison US troops north of the Demilitarized Zone. We have no desire to inflict harm on the long-suffering North Korean people, who are distinct from the hostile regime in Pyongyang,” they wrote.

However, in the same article, Mattis and Tillerson noted that the diplomatic process was backed up by a range of military scenarios.

“While diplomacy is our preferred means of changing North Korea’s course of action, it is backed by military options,” they added.

They did not clarify how Trump’s last week remark that North Korea “will be met with fire and fury like the world has never seen” fits Washington’s seemingly peaceful agenda.

Many politicians have already advised Trump against resorting to military action, warning of disastrous consequences.

Tillerson and Mattis named China as one of the “many nations” that supported the diplomatic push by the US.

“Our diplomatic approach is shared by many nations supporting our goals, including China, which has dominant economic leverage over Pyongyang,” according to the op-ed. “This affords China an unparalleled opportunity to assert its influence with the regime.”

Trump had previously said that he was “disappointed” with China lack of action on North Korea and urged the country to do more as the North’s main trade ally.

“The region and world need and expect China to do more,” Mattis and Tillerson wrote in their op-ed.

Following Trump’s inflammatory remarks last week, Pyongyang said it was “carefully examining” a plan to strike the American Pacific territory of Guam with its array of advanced ballistic missiles.