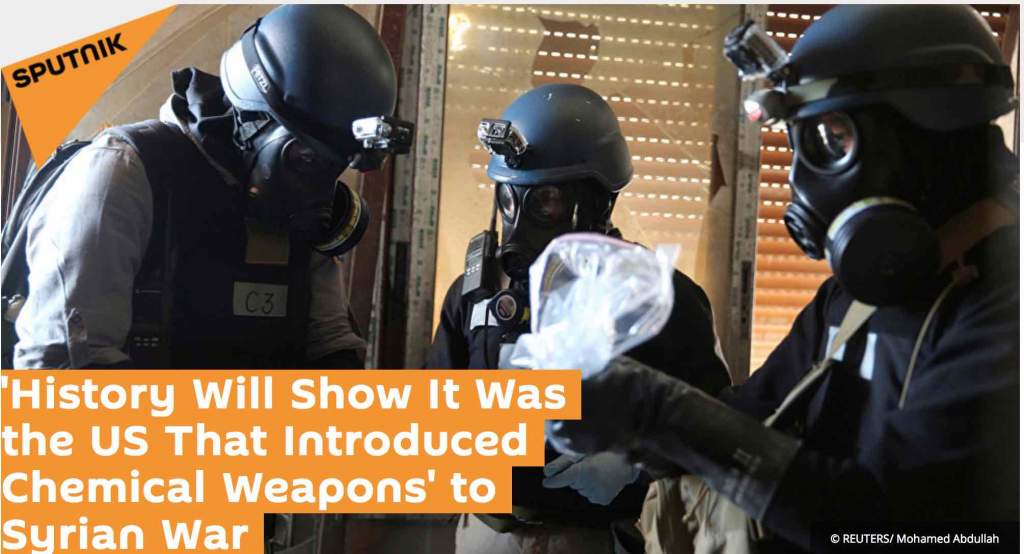 On Wednesday, the Syrian Foreign Ministry accused the US and the UK of supplying toxic agents to terrorists based on evidence found in Aleppo and a Damascus suburb. Sputnik Radio spoke with political analyst and Veterans Today Editor Dr. Kevin Barrett about the significance of this discovery and whether it could become a turning point in the Syrian conflict.

According to Syria’s Ministry of Foreign Affairs, the toxic agents found in Aleppo and a Damascus suburb were produced by one British company and two American companies. A corresponding statement was made by Syrian Deputy Foreign and Expatriates Minister Faisal Mekdad during a press conference in Damascus.

He said that  the riot control weapons discovered were limited to hand and rocket-propelled grenades which had been fitted with irritating toxic agents. The chemical ammunition had been produced by the US-based company Federal Laboratories, and toxic agents were produced by Cherming Defence (UK) and NonLethal Technologies (US).

Sputnik Radio discussed the issue with Dr. Kevin Barrett, a Doctor of Arabic and Islamic Studies and the co-founder of the Muslim-Jewish-Christian Alliance for Truth, who said that this discovery could be extremely important in exonerating the Syrian government of the accusations that they used chemical weapons against their own people.

“It could be extremely important, but it depends on how different elements of the international community react to this. Will they actually look seriously at it, will we get any real investigation from any international bodies or will they studiously look the other way and continue to spin everything they do in line with the imperial forces which are trying to destroy Syria and have been fabricating the information about alleged chemical attacks from the Syrian government, which all turned out to be false,” he told Sputnik.

“I am not going to hold my breath until the international community becomes honest about this whole issue,  but in the long run, history will show that it actually has been elements of the so-called Syrian rebels and their foreign backers, including the US, that have been guilty of introducing chemical weapons into this conflict,” he added.

The political scientist further elaborated how this incident could prove that the Syrian government, in fact, did not use any chemical weapons.”I don’t know if you could prove a negative with something like this, but it certainly is additional evidence, and it could be very strong and convincing additional evidence, that these past stories in which chemical weapons events were attributed to the Syrian government turned out to have been fabricated by the Syrian rebels,” he said.

This would be one more item of evidence, perhaps a very strong one, he said, suggesting that what we have seen is a consistent false flag strategy by the rebels and their foreign backers to introduce the chemical weapons into this conflict.

In the most serious incidents, including the Khan Sheikhoun incident in north-western Syria on April 4, we have seen this pattern of accusation over and over. And then in subsequent investigation we find out that either it did not happen, as in this case, where there were not real chemical weapons, or, as in other cases, it was fabricated by the rebels, he said. And this evidence will once again suggest that the rebels and their backers are fabricating these events. 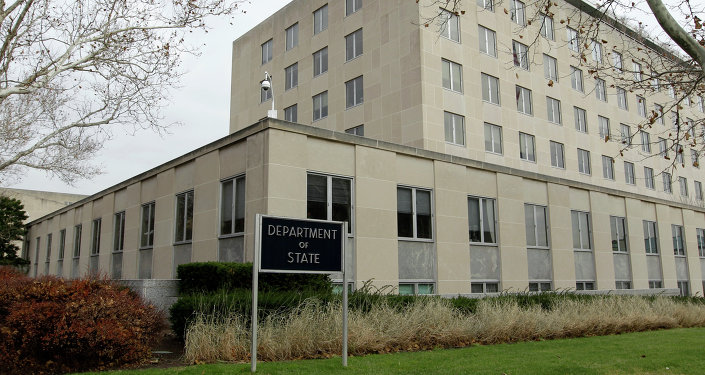 Dr. Barrett also commented on the statement of Faisal Mekdad that under Article 5 of the Convention on the Prohibition of Chemical Weapons, the use of toxic agents was allowed only in cases of stopping disorders. The Convention prohibits the use of toxic agents as means of warfare.”So, we can say for sure that the US and UK as well as their allies in the region violate the Chemical Weapons Convention. They support terrorist organizations operating in Syria. They deliver to the militants not only armaments but also prohibited toxic agents,” the Deputy Foreign Minister added.

Speaking about any possible repercussions which could follow the statement, Dr. Barrett noted that it “depends on international bodies having the courage to bite the hand that feeds them.”

“And we have not seen that kind of courage very often. We are getting all kinds of contradictory information and mushy equivocal statements from the UN, among others. Whether they will ever really take this up and turn against the US and UK is highly speculative, I can’t really imagine this happening any time in the near future,” he suggested.

© REUTERS/ AMMAR ABDULLAH
‘Beyond Understanding’: Moscow on UK, US Possible Supplies of Toxic Agents to Syria

The political scientist, however, suggested that this discovery could become yet another defining moment of the Syrian war, which in the long run will lead towards peace in the war-torn country.”The facts on the ground have changed now to favor the forces that have been defending the Syrian government against this destabilization program and the international talks to try to bring peace to the region have shifted away from the US and its Zionist and Saudi friends. Now we have Turkey, Iran and Russia playing the key role. Given those changes, it is possible that if a convincing enough case could be made based on this incident showing that the whole chemical weapons issue has been a fabrication, in the long run it could be sort of public relations turning point,” he said.

However, the real turning point, he further noted, has been that the US “has lost the will to continue to destabilize Syria, and Turkey has changed its attitude.”

Trump, Dr. Barrett said, has officially ended support for the CIA-backed Syrian rebels. Unfortunately the Pentagon is still backing other factions but to the extent that the US and the UK and NATO are able to get out of Syria and to admit that they made a mistake, this is as far as they will go.

“However they will never admit that the real purpose of all of this intervention has been to destabilize Syria and to pursue a geopolitical strategy against Iran and against Russia and in favor of  expansionist Israel. But to the extent they can get out, then they can afford politically to start telling the truth,” he said.

“We are seeing a different international situation now, with more of a will to find a solution to this problem. I think this will be part of a series of turning points that will ultimately lead to peace in Syria,” he finally stated.