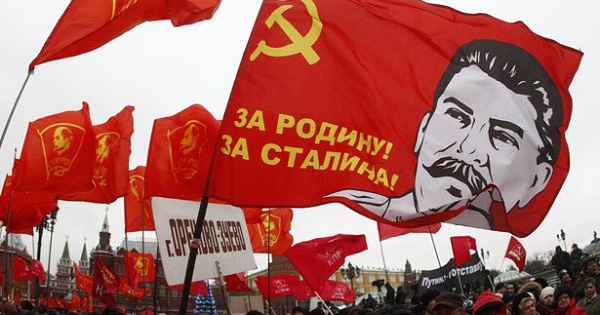 __________
TeleSUR
Life After the USSR: Buying the Dream, Living the Nightmare

The reality of life in post-Soviet Eastern Europe is not at all what was promised.

Standing in front of the Berlin Wall in June 1987, then President Reagan famously proclaimed:

Despite the neoliberal talking points about “freedom,” “democracy,” and “peace,” the reality of life in post-Soviet Eastern Europe is not at all what was promised. Consider the abstractions employed by people like Reagan who framed the end of the Soviet Union as an event that would usher in “peace” and “prosperity.” And then consider the fact that neither peace nor prosperity has come to fruition in Eastern Europe and the former Soviet bloc.

From the perspective of war and peace, no one could say that the post-1991 period has been particularly peaceful, especially when compared to the relative stability of the Cold War era. The United States has rapidly expanded NATO right to the doorstep of Russia, having subsumed most of the former Soviet Republics of Eastern Europe, including the Baltic states of Latvia, Lithuania, and Estonia, as well as Poland and Georgia. In that time, NATO has waged multiple vicious wars in the Balkans, including the criminal bombing of Yugoslavia which itself accounted for numerous war crimes, as concluded by Amnesty International at the time.

NATO has further attempted to pull both Belarus and Ukraine into its orbit, with the former remaining non-aligned, and the latter now in the throes of an ongoing civil war which is the direct product of a U.S.-backed coup against the Russia-allied former government of Viktor Yanukovich. The U.S.-backed neocon-aligned government of Mikhail Saakashvili in Georgia is responsible for waging the unprovoked 2008 war with Russia over the breakaway republics of South Ossetia and Abkhazia, a war that undeniably was started by NATO partner Georgia. As an EU-commissioned independent report concluded in 2009, “An investigation into last year’s Russia-Georgia war delivered a damning indictment of President Mikheil Saakashvili today, accusing Tbilisi of launching an indiscriminate artillery barrage on the city of Tskhinvali that started the war.”

Aside from wars in Europe, Western hegemony has also brought death and destruction to the Middle East and Africa, resulting in an exodus of refugees who are now being scapegoated by economically devastated countries in Southern and Eastern Europe. And while one might understand the socioeconomic factors leading to an anti-refugee backlash, it is unmistakable that the phenomenon is more a product of U.S.-NATO war-making than anything else.

And, of course, the most significant driver of public opinion is the standard of living or quality of life. Embedded in this abstract indicator is everything from employment opportunities, relative purchasing power, access to health care and education, and much more. Seen in this way, much of Eastern Europe longs for the halcyon days of the Soviet Union and communism, not because they were without problems – far from it, in fact – but because the kinds of problems people faced were markedly different from the ones they face today.

According to a comprehensive poll conducted by leading polling organization Gallup in 2013, “residents of [11 of the 15] former Soviet republics are more than twice as likely to say the breakup hurt (51 percent) than benefited their countries (24 percent).” Think about that statistic for a moment: twice as many residents of the former Soviet republics think the breakup of the Soviet Union did more harm than good. That is a rather devastating indictment of the supposed era of freedom and prosperity that the likes of Reagan & Co. promised in the years leading up to the breakup.

And while many neoliberal apologists hold up the fact that younger generations are more positive about the future, this fact is something of a distortion as part of the reason for such feelings is the ability of young people to simply leave their home countries. As economists Michael Hudson and Jeffrey Sommers concluded after studying the situation in Latvia:

“Neoliberal austerity has created demographic losses exceeding Stalin’s deportations back in the 1940s (although without the latter’s loss of life). As government cutbacks in education, healthcare and other basic social infrastructure threaten to undercut long-term development, young people are emigrating to better their lives rather than suffer in an economy without jobs. More than 12 percent of the overall population (and a much larger percentage of its labor force) now works abroad.”

In essence, the neoliberal policies of the EU-aligned former Soviet republics have created deep crises in nearly every aspect of social and economic life. From plummeting birth rates to an exploding orphaned population, the notion of a brighter future should certainly give any observer pause. Additionally, the post-Soviet period has given rise to a dangerous wave of ethnic politics in which the governments of these countries are often made up of the ethnic majority which is aligned to Brussels and the Washington Consensus, and which demonizes ethnic minorities, especially Russians.

In fact, economic decline and its inevitable effects on society have been seen in just about every former Soviet bloc country. In Romania for example, a country which joined the EU in 2007, “the most prosperous districts are dotted by dozens of unfinished building projects abandoned by bankrupt developers. And the small inner circle of prosperity is surrounded by areas of the city of 3 million that are little changed from the crumbling squalor of the Ceausescu era.”

And this is a country that received an IMF bailout akin to the albatross around Greece’s neck. Romania has experienced neoliberal-imposed austerity which has seen public sector wages slashed, a massive hike in sales tax, and the cutting of social services such as unemployment, maternity, and disability benefits. A similar picture exists in nearly every country in Southern Europe and Eastern Europe, as well as in Germany itself where millions long for the days of the GDR (East Germany) before countless German professionals and academics were left without jobs and without benefits.

Striking income inequality and inflamed ethnic tensions may have brought an American-style feeling to Eastern Europe, but it’s clearly not what most people want. Add to that the rise of far-right fascist parties capitalizing on the economic hardship and complete failure of the Left to challenge the neoliberal consensus, and it should be no surprise that today Eastern Europe faces a very dangerous historical moment, one which could have major implications for its long-term future.

And so, equally unsurprising is the fact that a significant portion of the people of the former Soviet republics look longingly at the days before the fall of the Soviet Union. They remember all the hardships, the lack of consumer goods, the police state, and more. But they equally remember the month-long summer vacations with family, the guaranteed employment and income, the free and universal health care and education, etc. These are the aspects of life under the Soviet Union that have been systematically erased by the narrative set forth by the West where capitalism reigns supreme and must remain unchallenged, as if it were the word of God himself.

But no, capitalism is not a cure-all for the ills of life. Western-style capitalism (neoliberalism) has imposed on the people of Eastern Europe a new kind of hardship in the years since the Soviet Union collapsed. No longer are consumer goods restricted by an imposing state apparatus, they are now available to all who can afford them; unfortunately for the vast majority of people, they can’t.

Instead, they must work more for less in hopes that their children won’t have to flee the country in search of better opportunities. Such is the reality of the American Dream in post-Soviet Europe.