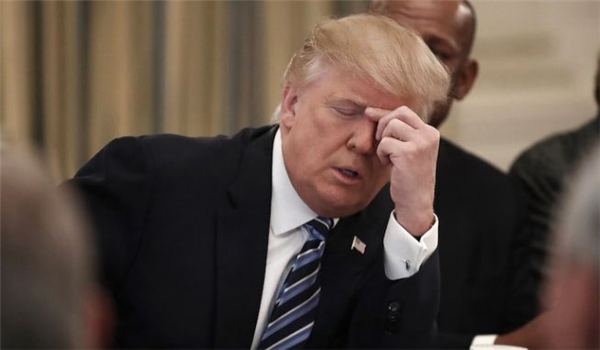 __________
FARS
Trump, Aides Not Able to Decide on Afghanistan Policy at Camp David

President Donald Trump and his top national security aides did not reach a decision on a new approach to the nearly 16-year war and occupation in Afghanistan after meeting for hours at Camp David.

Trump returned to his private golf course in Bedminster, New Jersey, after spending the day at the presidential retreat in Maryland, where White House Press Secretary Sarah Huckabee Sanders said he was “briefed extensively by his national security team on a new strategy to protect America’s interests in South Asia”, RT reported.

“The president is studying and considering his options and will make an announcement to the American people, to our allies and partners, and to the world at the appropriate time,” the White House said, according to Military.com.

Trump tweeted that he had a “GREAT meeting on National Security, the Border and the Military” on Friday.

No announcement was made on whether more troops would be committed to the region.

Earlier, Mattis told reporters at the State Department that the Trump administration “will move this toward a decision” on Afghanistan during the retreat at Camp David.

“We are coming very close to a decision, and I anticipate it in the very near future,” Mattis said.

In June, Mattis confirmed that Trump granted him the authority to set troop levels in Afghanistan. However, without the president signing off on a full strategy, the defense secretary has not made any changes to troop levels.

Mattis has reportedly been considering a plan from General John Nicholson, commander of US Forces-Afghanistan, who said the US needs an additional 3,000-5,000 troops to be successful in the region.

According to the Congressional Research Service, there were 9,800 troops in Afghanistan at the end of 2016.

Nicholson was not among the president’s national security aides at Camp David Friday.

When asked Monday if Trump has confidence in Nicholson, Mattis told the press to “Ask the president.”

The White House has also considered a plan from Erik Prince, founder of the private security firm formerly called Blackwater, who proposed outsourcing the job of training and assisting Afghan forces to private contractors.

Lawmakers have been growing increasingly frustrated with the Trump administration over the lack of direction in Afghanistan. Last week, Senator John McCain (R-Arizona), chairman of the Senate Armed Services Committee, unveiled his own “strategy for success,” which he plans to bring to a vote when the Senate returns in September.

“Nearly seven months into President Trump’s administration, we’ve had no strategy at all as conditions on the ground have steadily worsened,” McCain said in a statement. “We are losing in Afghanistan and time is of the essence if we intend to turn the tide.”