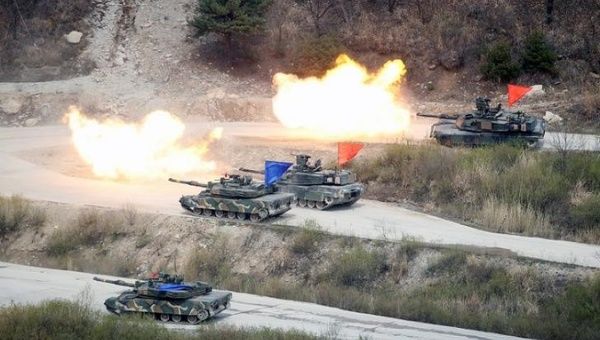 The exercises will “further drive the situation on the Korean Peninsula into a catastrophe,” North Korea says.

The United States is set to launch its annual joint military exercises with South Korea Monday, a move that threatens North Korea, or the Democratic People’s Republic of Korea, DPRK, as it denounced the exercises as a “rehearsal for war.”

The U.S.-South Korean exercise, called Ulchi-Freedom Guardian, will be the first large-scale military exercise between the allies since the DPRK successfully tested two intercontinental ballistic missiles in July and threatened to fire intermediate range ballistic missiles close to Guam earlier this month.

DPRK media outlet Korean Central News Agency, KCNA, warned in a brief statement that the exercises would “further drive the situation on the Korean Peninsula into a catastrophe.”

“Even though no one wants it, the war can’t be stopped with any kind of force if flame sparks due to a minor incident,” it said. “The problem is that if the Second Korean War occurs, it will only be turned into a nuclear war.”

Washington began ratcheting up threats against the DPRK after it achieved rapid progress in developing nuclear weapons and missiles capable of reaching the U.S. mainland.

U.S. President Donald Trump warned that the DPRK would face “fire and fury” if it threatened the United States. In response, the DPRK threatened to fire missiles towards the U.S. Pacific island territory of Guam.

The DPRK later said it was holding off the plan, while it waited to see what Washington would do next.

There are calls in both the United States and South Korea to pause or downsize the joint military exercises to reduce current tensions. Some hope it will potentially curb conflict with Pyongyang.

David Wright, a U.S. analyst from the Union of Concerned Scientists, said in an emailed statement that the United States should “postpone or significantly restructure” the exercises to reduce the risk of military confrontation.

Russia and China, the DPRK’s main ally and trading partner, have also urged the United States and South Korea to scrap the drills. However, Washington has not backed down.

“My advice to our leadership is that we not dial back our exercises,” said Joseph Dunford, chairman of the U.S. Joint Chiefs of Staff on Thursday in Beijing.

“The exercises are very important to maintaining the ability of the alliance to defend itself.”