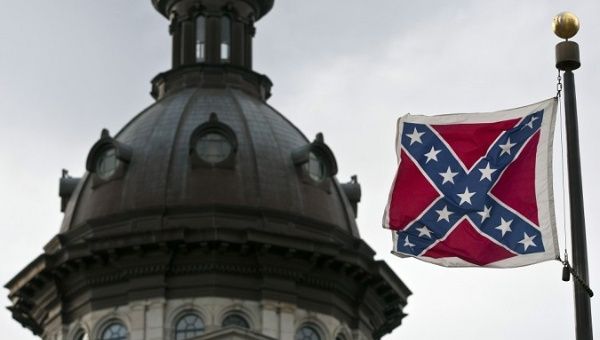 __________
TeleSUR
When Will the United States Transcend White Supremacy?

“The only people who routinely get indignant at the question are other white people.”

[ Editor’s Note: Making a case for this guy being a white supremacist himself would be easy. He condemns himself by not only using the all encompassing “White Supremacy”, a racial smear if there ever was one, because he wants a bigger target and to frame himself as a good guy supremacist.

This has shades of the Wahhabism ideology, where they appoint themselves to be Muslim supremacists who can condemn all other Muslims that do not think like them to be heretics that should be put to the sword, or throat slitting, as the case may be. His quote above is like saying “Only heretics would object to being called heretics.” You just can’t make this stuff up.

Israelis/Zionists have had this scam down pat for a long time, and other wannabe-supremacists (yes folks, Zionists view themselves as supreme, especially the radical Orthodox).

I remember some years ago, when an Israeli consulate officer got a lot of publicity for saying that he saw no problem with calling anyone that disagreed with Israeli policy an anti-Semite. He was not removed from his position, even though the term is used exactly like calling someone a Kike or a _igger. It just seems that some have a free pass not to be savaged publicly for doing it. Imagine that.

There are no shortage of knuckleheads, loud mouths, braggarts, and shameless idiots among all groups, but pushing these people out front as billboard for their respective racial, ethnic or religious groups is nothing more than a major country intelligence psyops, if I ever saw one.

Why? There are many reasons, starting with the age old “divide and conquer” game. You will all remember how, not too long ago, the “Deep State” term came out of the closet and was being used in international media almost overnight. Have you noticed how much it has disappeared, and with it any discussion about what to do about the “Deep Staters”?

All of a sudden we have fringe Alt-Right groups taking advantage of the Confederate monument jihad to get publicity for their relatively unknown groups, and the media pretending they are some kind of a threat movement. They have always been there – the difference now being that they are getting tons of publicity. Gosh, who might have benefited from that?

Comparing these people to the US gang problem, which Attorney General Sessions is making a priority, the Alt-Right folks are Brownies… an insignificant issue. They have been resurrected by someone using them as a blow-up doll. Again, who benefits?

This is an orchestrated scam folks. The street fighting, especially the aggressiveness of AntiFa (yes I have watched the videos) was classic Chaos Theory to create the conditions where someone would go off the deep end, which is exactly what happened. The heritage lynch mobs are all liquored up and out hunting for monuments they don’t like. It is they who are the supremacists, one of many kinds, but I do not smear a big group with the term, only those doing it.

Psyops Intel people did this kind of crap day in and day out all during the Cold War, creating internal strife by scratching old social group scabs. They see what is going on here in two seconds.

Groups of all kinds have  have been competing with and fighting each other since time in memoriam, before psyops and PR hustlers came along. Welcome to the real world which has nasty people, including those twisting this controversy to their own gain, to get more Dems to work hard and donate in the midterm elections. From an operational point of view, it is a slick move, but morally a sewer one with a long history… Jim W. Dean ]

Robert Jensen is a professor in the School of Journalism at the University of Texas at Austin and the author of The End of Patriarchy: Radical Feminism for Men.

Now that the violence in Charlottesville has forced “white supremacy” into our political vocabulary, let’s ask an uncomfortable question: “When will the United States transcend white supremacy?”

My question isn’t, “What should we do about the overt white supremacists who, emboldened by Trumpism’s success, have pushed their way back into mainstream politics?” I want to go beyond easy targets to ask, “When will U.S. society—not just neo-Nazis and the Klan, but the whole country—reject all aspects of white supremacist ideology and take serious steps toward rectifying the material inequality justified by that ideology?”

The answer is obvious: Never.

There’s no evidence the dominant culture is interested. The wealth—in fact, the very existence—of the United States is so entwined in the two foundational racialized holocausts in our history that transcending white supremacy requires not only treating people of color differently, but understanding ourselves in new and painful ways. To transcend white supremacy, white America would have to come to terms with the barbarism of our history and our ongoing moral failures.

If that seems harsh, heartless, or hopeless, let’s start with history.

The United States is the wealthiest nation in the world. The acquisition of the land base of the country and our path to industrialization and that wealth are inextricably tied to the genocide of indigenous people and African slavery. Those processes and practices, driven by dreams of domination and the nightmare of unchecked greed, were justified by white supremacist ideology. The result: millions dead, the lives of millions more impoverished, and entire cultures ravaged and sometimes destroyed.

Yes, the story of the United States also includes the quest for freedom and perseverance in the face of adversity, hard work and ingenuity. We love to tell those stories, while the barbarism typically is treated as a footnote. But there would be no United States as we know it without the genocide of indigenous people that cleared the land of “the merciless Indian Savages,” as the Declaration of Independence described the native population standing in the way of a new nation. Slave-grown cotton provided a crucial raw material and equally crucial export earnings that aided U.S. economic expansion and spurred industrial development in the North.

White supremacy defines not just the states of the Confederacy, but the whole country. I was born and raised in North Dakota, and I’ve lived the past 25 years in Texas. Which is more virulent, the overt anti-Indian racism I grew up with or the overt anti-black racism I live around today? They’re about the same. What about the unspoken sense of superiority of polite white society? About the same in both places, whether it’s conservative Fargo, ND, or progressive Austin, TX.

Why do these attitudes persist? Because to face the reality of our barbaric history would be to admit that our wealth — our very existence — depends on our racialized holocausts, and hence our claim to that land and wealth is suspect. It doesn’t matter if any of my ancestors participated in the genocide (they were more recent immigrants) or owned slaves (they didn’t). What matters is whether we can tell the truth and remedy, to the degree possible, the consequences of that historical barbarism and the contemporary practices that flow from it. Being anti-racist means supporting anti-racist policies.

So get serious about giving every school the funding needed, channeling extra resources to struggling schools until they reach parity. Assign the most experienced teachers to the schools that have been neglected; let the new teachers handle the rich kids. Raise taxes, and no whining.

School equity would be one small step toward an honest reckoning, and we don’t even do that. I can’t say with certainty that white America will never face this honestly, but in my life I’ve seen no indication of a general interest in a public discussion at this level.

Not surprisingly, when I ask, “When will the United States transcend white supremacy?” the responses vary widely. Indigenous and black people often chuckle, not because the subject is funny but because the answer—never—is so obvious. In general, people of color are understandably skeptical about the commitment of white America, recognizing the clash between the good intentions of many white people and those same white people’s reluctance to endorse the easy steps, let alone the radical social change, necessary to transform a society.

But the only people who routinely get indignant at the question are other white people. They’re the ones who accuse me of being harsh, heartless, and hopeless. Perhaps I am all three, but even if that’s the case, the question hangs uncomfortably: When will we transcend white supremacy?

Robert Jensen is a professor in the School of Journalism at the University of Texas at Austin and the author of The End of Patriarchy: Radical Feminism for Men. He can be reached at [email protected] or through his website, http://robertwjensen.org/.