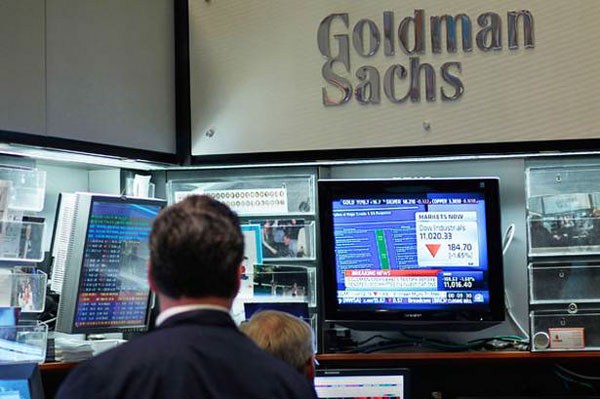 Ann Coulter is swimming in a flock of dodos again. You remember what happened to her when she dropped the “How many f—ing Jews” thing two years ago? Remember how she had to beg for mercy in order to be accepted again by the Zionist Klan?

Well, Coulter has learned a few things ever since. She has learned to stay alive politically by avoiding to mention the “politically incorrect” statement that got her into trouble. But she has implicitly dropped the “anti-Semitic” bomb by saying that “Goldman Sachs is running the country!”[1]

We have a problem here because Coulter has been criticizing “the Left” for her entire career. But who has been saying that Goldman Sachs has been sacking America and much of the world over the past eight years or so?

Hint: it was not Ann Coulter.

The man who has been documenting this is a “Leftist” by the name of Matt Taibi of the Rolling Stone. Taibi said in 2009: “From tech stocks to high gas prices, Goldman Sachs has engineered every major market manipulation since the Great Depression.”[2]

Companies such as Goldman Sachs have been able to cheat clients for years. Goldman Sachs seems to be the Rothschild of modern time. “The composer Louis Spohr recounted Nathan saying, ‘I understand nothing of music. This’—patting his pocket and making his money rattle and jingle—‘is my music.’” Philo-Semitic historian Niall Ferguson comments:

“The notion that an ill-educated Jew could behave this way in polite society and get away with it purely on account of his newly acquired and largely paper wealth, variously fascinated and appalled contemporaries, depending on their social position and philosophical attachment to the traditional hierarchical order.”[3]

As you shall see, Goldman Sachs representatives get away with similar things because they think they are the masters of the universe. And this is another reason why huge companies whose central focus is Mammon can use the economy to make the poor suffer.

Trump himself has been conniving with Goldman Sachs for years. Trump announced last year that the new head of his White House National Economic Council would be a Goldman Sachs executive who goes by the name of Gary D. Cohn. Cohn has been with Goldman Sachs since 1990. This means that “that economic policy under the president-elect, Donald J. Trump, will be shaped chiefly by veterans of the Wall Street firm,”[4] the very same people who helped ruin the economy and who keep advancing rapacious capitalism and usury. Cohn’s annual salary as a Goldman Sachs execustive was…$22 million a year.[5]

Keep also in mind that Trump attacked Goldman Sachs throughout his political campaign. He said then that there is “a global power structure that is responsible for the economic decisions that have robbed our working class, stripped our country of its wealth and put that money into the pockets of a handful of large corporations and political entities. I know the guys at Goldman Sachs. They have total, total control.”[6]

Coulter is sad because Trump is still in cahoots with the elite and the oligarchs, who are part of the “global power structure” that has ruined economic progress in America:

“Since his election, however, Mr. Trump has stocked his future cabinet with a number of Goldman alumni, including Mr. Mnuchin, a HEDGE FUNDmanager and a former Goldman trader, and Stephen K. Bannon, a former Goldman banker who is now Mr. Trump’s chief strategist.”[7]

What’s wrong with conniving with companies like Goldman Sachs? Well, plenty. As Matt Taibi put it a few years ago:

“In fact, the history of the recent financial crisis, which doubles as a history of the rapid decline and fall of the suddenly swindled dry American empire, reads like a Who’s Who of Goldman Sachs graduates.”[8]

Taibi supported this assertion with a plethora of evidence. But if you think he was smoking something weird when he penned those words, then consider Greg Smith, former Goldman Sachs executive director and head of the firm’s United States equity derivatives business in Europe, the Middle East and Africa.

Smith, who is Jewish, said that he left the company in 2012 because the oligarchs in the company don’t give a flip about their customers. They only care about “making money.”[9] “Today,” Smith said, “if you make enough money for the firm (and are not currently an ax murderer) you will be promoted into a position of influence.” Well, how do you go about making money for the company? Do executives really abide by moral principles? Well, let’s see:

“What are three quick ways to become a leader? a) Execute on the firm’s “axes,” which is Goldman-speak for persuading your clients to invest in the stocks or other products that we are trying to get rid of because they are not seen as having a lot of potential profit. b) ‘Hunt Elephants.’

“Today, many of these leaders display a Goldman Sachs culture quotient of exactly zero percent. I attend derivatives sales meetings where not one single minute is spent asking questions about how we can help clients.

“It’s purely about how we can make the most possible money off of them. If you were an alien from Mars and sat in on one of these meetings, you would believe that a client’s success or progress was not part of the thought process at all.”[10]

Smith was just warming up: “I have seen five different managing directors refer to their own clients as ‘muppets,’ sometimes over internal e-mail. Even after the S.E.C., Fabulous Fab, Abacus, God’s work, Carl Levin, Vampire Squids?”[11] Whenever there is a huge scandal related to banking and profit, you can be sure that Goldman Sachs will be there. Economist Robert B. Reich argued that Goldman Sachs even profited from the Greek debt crisis by lending at exorbitant rate.[12]

It was also reported that “Goldman Sachs bankers paid for prostitutes, private jets and five-star hotels and held business meetings on yachts to win business from a Libyan investment fund set up under Gaddafi regime.”[13] One Libyan official finally saw that Goldman Sachs was another criminal organization that should never have set foot in the country. He called Goldman Sachs the “bank of mafiosa.”[14]

Well, this “bank of mafiosa” has been operating under an essentially diabolical system, which proposes that it is all right to cheat the Goyim because they are sub-humans. Coulter again does not want to discuss things like this because that would literally ruin her political ideology. She doesn’t like to address the real issue at all, even though she knows better.

Coulter says that “we all know that [Jared] Kushner is the one who won the White House for him [Trump],”[15] but she could never tell us that Kushner is also conniving with the Israeli regime. Coulter said on television that she “wished we could have Netanyahu as our president”! Is this woman really serious? The Jewish Telegraphic Agency declared last February that

“Netanyahu has long been a friend of the Kushners, and particularly Jared’s dad, Charles Kushner, a major donor to pro-Israel and Jewish causes. One time…Jared gave up his bed and moved to the basement so Netanyahu could spend the night at their home in Livingston, New Jersey.”[16]

So, which is it, Coulter? You’d love to have Netanyahu as the president of the United States but you hate Kushner, who is actually in cahoots with Netanyahu? Don’t you know that Kushner has been friends with Netanyahu since Kushner was 17 years old?[17]

[3] Quoted in E. Michael Jones, Barren Metal: A History of Capitalism as the Conflict Between Labor and Usury (South Bend: Fidelity Press, 2014), 1080.