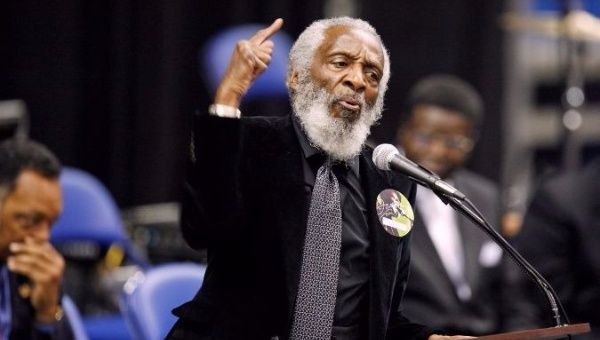 Civil rights activist, comedian and author Dick Gregory has died following a brief stay in the hospital for a bacterial infection, according to his son Christian. He was 84-years-old.

The comedian’s family posted a message on his Twitter account, late Saturday, expressing “enormous sadness,” and confirming the death of “a comedic legend.”

There was an outpour of condolences, on social media, from well-known figures and organizations. 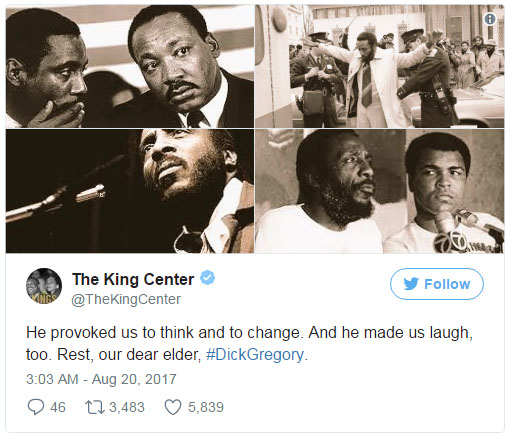 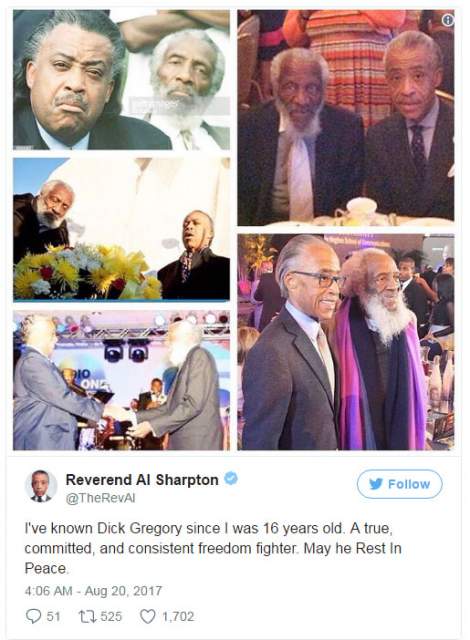 The activist was well-known for challenging racial stereotypes and eroding barriers during in the 1960s, mainly using humor to effect social consciousness. As a result, he was beaten and jailed on several occasions for participating in civil protests, in which he employed a nonviolent approach inspired by his admiration for Gandhi and Martin Luther King Jr.

Undeterred, Gregory participated in hunger strikes to draw attention to injustices both in his native America and the world at large. The Middle East conflicts, American hostages in Iran, animal rights, police brutality, the Equal Rights Amendment for women were among his advocacy.

Gregory, not one to shy away from controversy, conducted research and expressed skepticism surrounding the assassination of John F. Kennedy and King Jr. The comedian famously discredited the moon landing and 9/11 attacks. He was also an ardent supporter of the anti-apartheid movement in South Africa.

The comedian was one of the first African-American comedians to find mainstream success among white audiences in the 60s, even demanding a spot on the coveted Tonight starring Jack Paar couch when it was unheard of for black comedians.

The author was a pioneer, one who skillfully tackled racial issues – that was largely plaguing the United States – on the cusp of the civil rights movement and beyond. Gregory effortlessly paired humor with activism to bring attention to segregation and other social inequalities affecting people of color.

He was born Richard Claxton Gregory in 1932 and raised by a single mother of six. Despite the handicap of poverty, his intellect landed him a spot at the predominantly-white Southern Illinois University.

He was an iconic figure who advocated for social justice and sought the company of and engaged like-minded individuals, including King Jr., Malcom X, Bob Marley, Richard Pryor, Muhammad Ali and many others.

Gregory worked several odd jobs after he was discharged from the Army and prior to becoming a successful comedian, ironically to a mostly white audience.

“Where else in the world but America,” Gregory joked at one of his early 60s gig, “could I have lived in the worst neighborhoods, attended the worst schools, rode in the back of the bus, and get paid $5,000 a week just for talking about it?”

In Phil Berger’s book, The Last Laugh: The World of Stand-up Comics, Gregory poignantly stated: “I’ve got to go up there as an individual first, a Negro second,” he said adding, “I’ve got to be a colored funny man, not a funny colored man.”

In the mid-60s he made an unsuccessful bid for mayor of Chicago before running for president of the United States in 1968 – managing to get 200,000 votes.