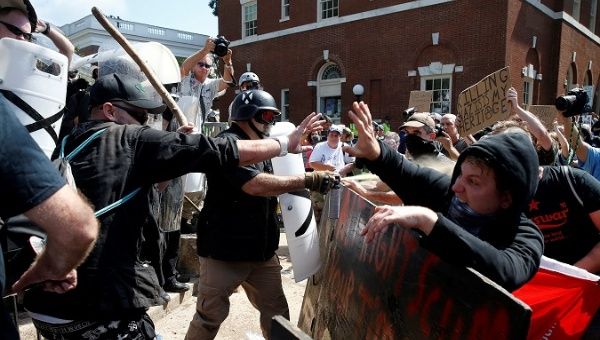 In November 2016, United Nations Human Rights’ Committee put forward a resolution titled “Combating glorification of Nazism, Neo-Nazism and other practices that contribute to fuelling contemporary forms of racism, racial discrimination, xenophobia and related intolerance”. On alleged principles of free speech, more precisely on claims that the resolution places ‘unacceptable limits on the fundamental freedom of expression’ the Unites States, under Barack’s Obama presidency at the time, voted against the U.N. declaration, alongside Ukraine and Palau.

In the name of building democratic skills and institutions, the U.S. was also supporting, not that long ago, neo-fascists forces in Ukraine. In December 2015 (again under Obama’s presidency) the U.S House Appropriations Committee released the FY 2015 Omnibus Appropriations Bill, which aimed to use US$64 billion for ‘overseas contingency operations’, that is to strengthen European countries’ position, in lay translation- Ukraine, in regards to Russian aggression. While an amendment was drafted by the Congressmen John Conyers of Michigan and Ted Yoho of Florida, to limit assistance funds from trickling to the Azov Battalion, the Neo-Nazi Ukrainian group, also a sub-division of the Ukrainian National Guard, this amendment was subsequently left out from the Bill. Yet, there was documented evidence of the U.S supporting the Azov battalion, in terms of providing military and logistic training, including auxiliary support to the Ukrainian National Guard.

Since 2009, the U.S has financially assisted the right-wing political segment in Venezuela, with US$49 million, as reported by teleSUR, the very same segment nowadays at the forefront of the Venezuelan violent dissents.

The U.S has a long history of supporting right wing reactionary forces. It used Honduras as a base to arm right-wing paramilitaries; it backed the reactionary Hindu Kush with the aim of destabilizing the Marxist government in Kabul; it supported the Islamist right in Afghanistan and Pakistan, and South Africa’s apartheid regime.

After the Panama invasion in 1989, the U.S participated in 9 military campaigns: in the Gulf War, the Somali Civil War, in Haiti, the Bosnian War, the Kosovo War, in Afghanistan, Iraq, the North- West Pakistan War and the Libyan War.

Since 2001, the U.S spent 7.6 trillion on wars and national security, expenditures accompanied by cuts to social spending and tax cessations for the rich.

Although the U.S. ranks first globally, with regards to its Gross Domestic Product (GDP) — at 18,569,100 millions — the U.S holds the 4th place in terms of income inequality, offsetting only Costa Rica, Mexico and Turkey. Its official poverty rate sits at 13.5 percent, with an estimated 43.1 million Americans living in poverty.

Charlottesville is symbolically representative of the troubled state of U.S. society. A society which historically choose to disregard the needs of its people, that failed to critically reflect on its racist and xenophobic past, and that refused to invest in state supported forms of services (i.e. public education, universal health care) to alleviate generational systems of entrenched inequality, opting instead for the distribution of societal advantages solely overlaid on wealth and monetary lines. Economics have been for long connected with the rise of the political far -right (we can easily think of Greece’s Golden Dawn ascension as coupled with the state imposed austerity measures), whereas marginalized nationals shift the blame of their exclusion on the different other, on the foreigner –perceived as less-entitled to claim inclusionary rights and seen to take possession of the scarce available prospects (i.e. jobs). The U.S has been promoting an imperial foreign policy that was always aligned with the right, had always been allergic to communist notions of equality and equity, and condemned collective ideals for establishing fair societies.

In a short film edited by Vice Media (i.e. Viceland Channel), titled ‘America’s Far Right’, a hipster reporter films a conversation with a white neo-Nazi lower class family (class is easily visible on the body, as it relates to the choice of clothes, mannerisms, vocabulary, ways of talking, and overall, ways of being), who publically state on camera that they support another genocide (against Jews) so their children ‘should have a chance in the world’. Believers in the idea and the ideal of white supremacy are part of the subordinate, lower, and uneducated classes of American society. They have no chance to escape their status-based condition, no chance to better education, no real chance to upward mobility.

When you’re systemically disenfranchised and condemned to a life on the margins, the only way to reorient yourself is to claim symbolic appurtenance to the categorical distinction correlated with privilege: whiteness in this case: ‘I might be poor but at least I’m white’.