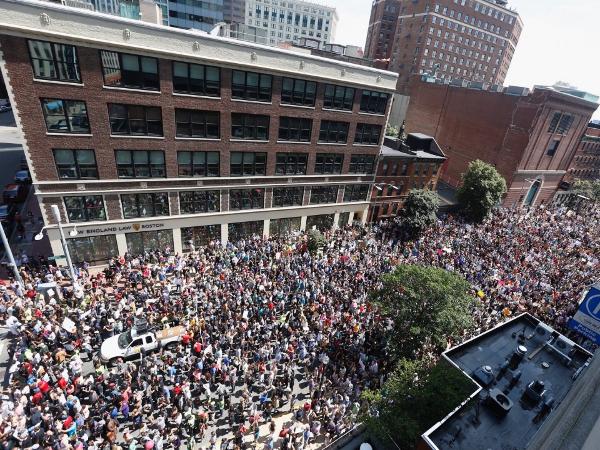 __________
Business Insider India
Trump labels Boston protesters ‘anti-police agitators,’ then praises them for ‘speaking out against bigotry and hate’

“Looks like many anti-police agitators in Boston. Police are looking tough and smart! Thank you,” Trump wrote on Twitter .

Trump followed up shortly afterward by tweeting “sometimes you need protest in order to heal, & we will heal, & be stronger than ever before!”

“I want to applaud the many protesters in Boston who are speaking out against bigotry and hate. Our country will soon come together as one!”

Trump quickly faced criticism for his initial description of the counter-protesters. Boston Mayor Marty Walsh responded on Twitter that, “Today Boston stood for peace and love, not bigotry and hate. We should work to bring people together, not apart.”

Although Boston police said at one point rocks were thrown at officers, they told media at a press conference that some 40,000 people had attended the protests and remained largely peaceful. Twenty-seven people were arrested.

“99.9% of the people were here for the right reason, and that was to fight bigotry and hate,” Boston police commissioner William Evans said.

The Boston protests came one week after the Charlottesville white nationalist rally last weekend that erupted in violence and left one woman dead.

Trump had drawn near-universal backlash after initially refusing to single out white nationalists and white supremacists for condemnation, then laying blame “on many sides.” He later issued a specific condemnation of the white nationalists, but continued to equate their actions with those of the counterprotesters.