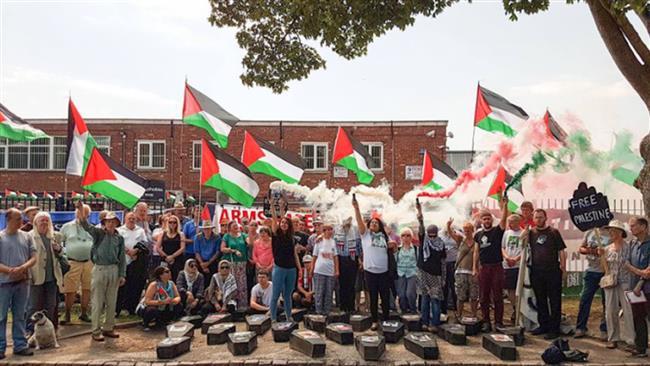 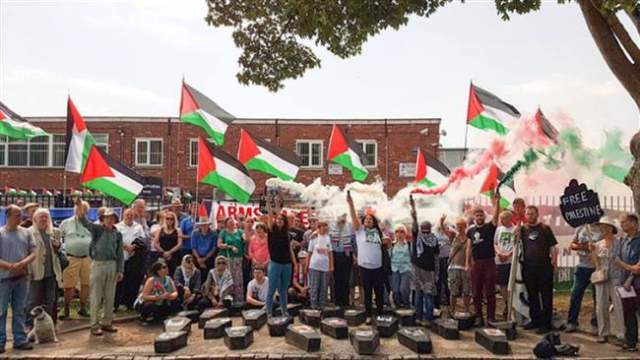 A group of five pro-Palestinian activists in the UK face possible prison sentences after being arrested during protests outside an Israeli-owned weapons manufacturing company.

Charged with a breach of the Trade Union and Labor Relations, the protesters face at least six months in prison and a fine of up to £5,000, the media reported Sunday.

They were arrested in July following a protest in the West Midlands town of Shenstone that forced the UAV Engines Ltd plant, a subsidiary of Israeli drone manufacturer Elbit Systems, to shut down all operations for two days.

The demonstration saw activists put small coffins outside the factory and lay down next to them to raise awareness about the Israeli regime’s record of killing Palestinian children over the years-long occupation of the country.

Palestine Action, the organization that helped organize the demonstration, said all of the accused would plead not guilty in the case.

“They [protesters] believe that the factory is complicit in illegal activity and that they were preventing a crime,” the group’s Birmingham and Manchester branches said in a statement.

A lawyer for the protesters said “the lawfulness of [Elbit and UAV Engine’s] activity in its factory” was one of the issues that they were going to discuss in the case.

Based in Haifa, Elbit produces a range of military equipment, including drones, aircraft, weapon control systems, and artillery.

The company’s customers include the Israeli army, US Air Force, the British Royal Air Force, and the French Defense Ministry.

A group of European banks and financial institutions have on several occasions boycotted the company for arming Israeli military forces despite growing criticism from the international community.

The efforts are part of the Boycott, Divestment and Sanctions (BDS) global movement against Israeli companies.

The British government has been under increasing pressure from Israel to put a ban on pro-Palestinian demonstrations.

A number of universities in the UK have already banned their students from holding events in solidarity with the people of Palestine.