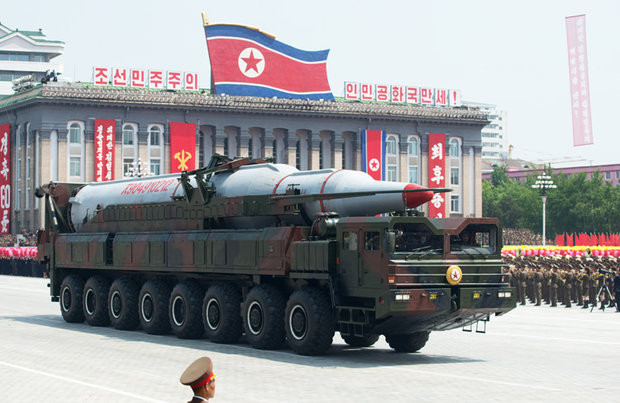 Since the Armistice agreement of 1953, the Cold War on the Korean peninsula has continued.

Following the initial attempts of the Kim Dynasty at acquiring nuclear weapons and ballistic missiles capability to deliver them in the early 1990s, the tension between the Democratic Republic of North Korea and the United States and its treaty allies — South Korea and Japan — has aggravated.

All international attempts at preventing the regime in North Korea from developing this capability seem to have failed with Pyongyang successfully testing a different range of ballistic missiles over the last decade.

With the American soil now coming under the danger of North Korean attack, the United States, the most important security provider in East Asia and the protector of its allies in the region, has escalated the verbal attack on the Kim Jong-un regime, with President Donald Trump blatantly threatening the regime with deadly American response should the hermit kingdom hit South Korea, Japan, or any American presence in the region.

American fury has lately been directed at the verbal threats of the Kim regime to target the American military base in Guam, which seems to be within the range of North Korean intercontinental ballistic missiles.

The reason why many pundits and analysts seem to have now expressed great worry in the context of the latest tension is that the world might seriously come to the brink of a nuclear war due to the irrational behaviors displayed by both the Kim regime and the Trump administration.

The irrational rhetoric of the North Korean regime to openly target American territories in Guam and to defy all international warnings not to ‘pass the Rubicon’ seem to have led the President Trump to irrationally put American military machine at the center of his country’s response to the solution of the crisis.

Threatening the Pyongyang regime with American fury and fire and implying that the U.S. military is now locked and loaded in East Asia leads many to ask whether we have already passed the point of no return.

It would be tantamount to prophesying to predict how the crisis will unfold in the days and months ahead and whether the world will witness a new nuclear war since nuclear weapons were last used in 1945.

The bets are that the cool heads will finally prevail over the war-mongers and a diplomatic solution to the crisis will be found. It is argued that neither South Korea nor Japan would want a war since they would likely be the main targets of the North Korean regime.

The regime in Seoul seems to be in favor of diplomatic solutions with President Moon openly making the case that the revitalization of the time-tested ‘sunshine diplomacy’ will finally pave the way for the integration of the most isolated country in the world into the international system.

The South Koreans appear to be vehemently opposed to the militarization of the crisis and entrusting their security to the unforeseeable strategic intentions of the Trump administration.

South Korea is not only within the reach of likely North Korean attacks, but it also finds itself in the middle of an evolving strategic confrontation between the U.S., the current hegemon, and China, the aspiring hegemon. Needless to say, around two hundred thousand American nationals live in the country, of whom approximately thirty thousand are military personnel.

Japan seems to be in a similar situation, having invested vital strategic and economic interests in the continuation of its trade-based relationship with Beijing. Any war on the Korean peninsula will undoubtedly involve China and pit Japan on the side of the U.S. against the rising China.

Having suffered from the horrific consequences of the use of atomic weapons in 1945, Japan also approaches the issue from a moral perspective.

Along with Germany, Japan is one of the key supporters of diplomatic and soft-power oriented solutions to international crises around the globe.

It also appears that South Korea and Japan share the common sentiment that the American nuclear commitment to their territorial security can no longer be taken for granted as Pyongyang has developed the capability of hitting American territories directly.

Whether the U.S. will risk the life of its citizens in New York, Washington or Los Angeles to prove its commitments to South Korean and Japanese lives in Seoul and Tokyo is now an open-ended question given that President Trump openly accused the traditional allies of free-riding on the U.S. and put the ‘America first’ mantra at the center of his foreign policy.

Similar to South Korea and Japan, it is also believed that Beijing will do its best to find a diplomatic solution to the crisis when the push comes to the shove.

It has more vital interests in the continuation of its strategic-economic relations with the United States, Japan and South Korea than North Korean actions resulting in a nuclear catastrophe and global turmoil.

The hope is that its worries of any regime change in North Korea, reunification of the island under American-supported South Korea and the influx of North Koreans to its territory will eventually push the Beijing regime to invest more in the diplomatic solution of the current crisis.

Beijing does not have any problem with the current Kim regime and fears the negative consequences of the use of military power by its archrival, the U.S., in its backyard.

The continuation of the status quo on the Korean peninsula with North Korea acting as a bulwark against South Korea and the U.S. can only serve the Chinese interests provided that the irrational nuclear policies of the Kim regime do not provoke a deadly American response.

What is going to be irrational on the part of the Chinese leadership is that they assume the U.S. will not increase the pressure on Beijing to play a facilitative role in this process.

Beijing would do well to appreciate that the international community, particularly the United States and its treaty allies South Korea and Japan, do now see China as the most important country in the solution of the current crisis.

The Kim regime has already proved its steadfastness to defy American warnings not to develop its nuclear and ballistic missile capability.

President Trump took the opportunity of various meetings he held with the Chinese President Xi Jinping on different occasions to transmit this American expectation to the Chinese leadership.

The latest example of such American thinking became manifest in the op-ed piece that Secretary of Defense James Mattis and Secretary of States Rex Tillerson wrote for the Wall Street Journal on August 13, 2017.

In that article, both secretaries made it abundantly clear that the ‘strategic patience’ policy of the Obama administration was a mistake and the U.S. now pursues a new policy of ‘strategic accountability’, according to which not only the regime in Pyongyang would bear the negative consequences of its irrational actions but also the onus is now on China to act as an ‘accountable’ global power to prove its responsibilities to the maintenance of regional peace and stability in the region.

The U.S. and its treaty allies still favor a diplomatic solution to the dispute and hope that the latest economic sanctions imposed on North Korea in the first week of August 2017 will produce some positive consequences sooner than later. Yet, they will also increasingly hold the Chinese leadership accountable for such an outcome, short of military solutions, to bear fruits.