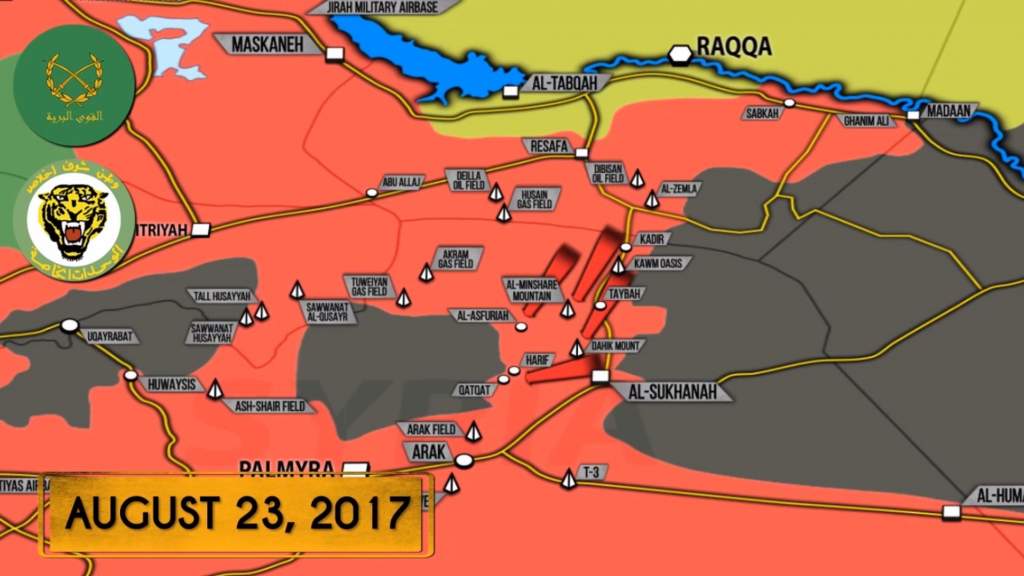 On August 23, the Syrian Arab Army (SAA) and its allies closed the second pocket in the province of Homs liberating the Dahik mount, the al-Minshare mount and the villages of Harif, al-Asfuriah, Rud al-Wahesh, and Qatqat.

The SAA also liberated Salba town north of the ISIS strong point of Uqayribat in the eastern Hama countryside.

The Russian Aerospace Forces conducted up to 50 airstrikes in support of the anti-ISIS operation north of the Homs-Palmyra highway.

On August 24, government forces continued developing momentum against ISIS in the area. According to pro-government experts, the SAA will soon clear the entire province from ISIS terrorists.

ISIS terrorists conducted an attack against government forces in the al-Waer area near the Iraqi border.

According to the ISIS-linked news agency Amaq, ISIS killed about 20 members of the SAA and Hezbollah and destroyed 6 military vehicles and 2 artillery pieces. However, ISIS was not able to seize the area.

ISIS has lost important positions at the Syrian-Lebanese border.

The SAA and Hezbollah captured 70% of the Mira crossing area and reached the Sin Fikhah crossing in western Qalamoun. Qarnaht Sha’abat al-Bahsah and Harfush have been also secured.

This week, the US-backed Syrian Democratic Forces (SDF) captured al-Rasheed neighborhood in Raqqah. Clashes were reported in the southern part of the city and in Old Raqqah but the SDF has not achieved notable gains there.

The SDF, supported by the US-led coalition, started the official storm of the ISIS-held city in early June.

Pro-Kurdish sources speculated that the SDF would need only 2-3 months to take control of Raqqah entirely. However, it seems that much more time will be needed. ISIS still has a strong presence in the populated areas and puts up a strong resistance to the US-backed force.