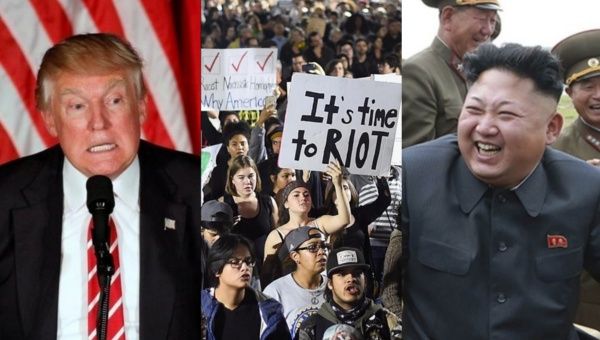 U.S. residents are increasingly gripped by unease about Trump’s public statements and behavior as president.

Over half of U.S. residents disagree with President Donald Trump’s approach to relations with North Korea, a survey by George Washington University has revealed.

53 percent of U.S. residents disapprove of his style of dealing with Pyongyang – which has included threats of nuclear war – while 43 percent approved.

“North Korea best not make any more threats to the United States,” the president said earlier this month in impromptu comments delivered from his luxury golf resort in New Jersey. “They will be met with fire and fury like the world has never seen … he (sic) has been very threatening beyond a normal state. They will be met with fire, fury and frankly power the likes of which this world has never seen before.”

The Democratic People’s Republic of Korea, as North Korea is officially known, responded by saying any such move would be met a retaliatory attack on the U.S.-occupied territory of Guam.

The poll surveyed 1,009 registered voters across the U.S. from Aug. 13 to 17, and had a margin of error of 3.1 percentage points. During that period, tensions were high as the U.S. war threats and DPRK responses dominated airwaves shortly before tensions eased.

Voters also voiced unease about the former reality television personality’s public statements and behavior in his new role as president.

A commanding majority of 71 percent, said his “behavior is not what I expect” from the chief executive of the country, versus 27 percent who disagreed with the statement.

68 percent agreed that the commander-in-chief’s “words and actions could get us accidentally involved in an international conflict,” while 29 percent disagreed.

Despite that, voters were split fairly even on his handling of the economy, with 50 percent signaling approval and 46 percent showing disapproval.

Nearly two-thirds, or 63 percent of those polled said the country is on the wrong track while a majority of 56 percent disliked President Trump versus 41 percent who favor him.

A similar number – 55 percent – disapprove of the way he’s managed his presidency while 42 percent approved, and 56 percent said he’s ineffective as head of state while 39 percent believe he has been effective.

“The (survey) data show that more Americans object to President Trump’s character than his agenda,” Michael Cornfield, associate professor of political management at the university and research director for the poll, said in a news release.

“If there is anything approaching a consensus in today’s sharply divided America, it’s that Trump speaks and behaves inappropriately given the office he holds.”