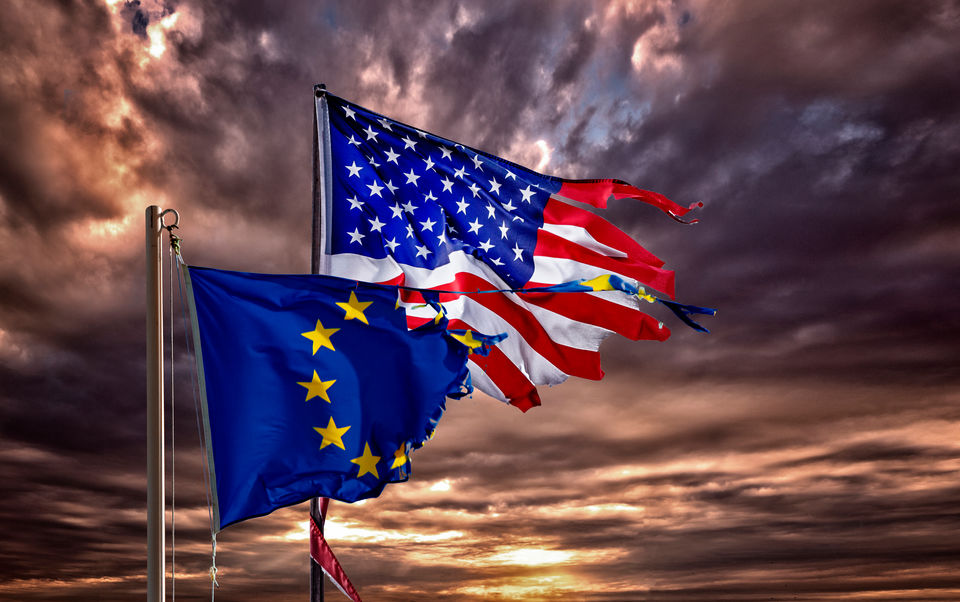 Democracy and freedom of expression are under attack. There is blood in the streets. How did it get that way? Where did it come from, what are its sources and what continues to drive it?

This four part series will look at the origin of those sources and unlock connections that when understood should open doors of perception that have been locked shut for far too long.

“Tensions between Russia and the U.S. are again on the rise and the risk of a trans-Atlantic trade war is greater than ever, which would have devastating consequences for the global economy. The West as an entity, it would seem, is disintegrating.” – Der Spiegel Magazine – June 30, 2017

On the eve of the 2017 G-20 summit in Hamburg the view of the United States from Germany is grim. Europe is overrun with refugees from NATO’s wars in the Middle East, Eastern Europe and Africa while President Trump makes impossible demands and offers nothing in return.

In a scene reminiscent of Germany in the 1930s, angry masses riot in the streets of Hamburg protesting austerity and economic inequality. Like 18th century French Royals, the European Union’s detached and disaffected ruling elites struggle to deal with events beyond their control.

The lessons of the past go unlearned, the classic mistakes of the ages repeated.

The EU, a post-World War II project of the CIA is broken. America’s role as a Unipower has ended in bitterness and without ceremony. The post-war world order held together for better or worse by the perception of American omnipotence and the ideology of casino capitalism is disintegrating fast and with it “The West as an entity.”

Decline of the West

The end did not come suddenly. As disappointing as it may be to the fulminating anti-Trump political sphere, the “Culture” of Western civilization has been in a state of confusion over its decline for some time. It is only befitting a cosmic joke that an American hotel/casino owner should bring down the curtain on it.

One hundred years ago, in the run up to World War I the visionary historian/philosopher Oswald Spengler produced a radical analysis of civilization and culture entitled The Decline of the West, Form and Actuality. Written before the war, but published in 1918 in the aftermath of German defeat, the book became an immediate success and has for nearly one hundred years been challenging successive generations of geopoliticians to come to terms with it.

In Decline of the West, Spengler defines “cultures” as an organic whole which evolve through a life cycle of spring, summer, autumn and winter and then fade away. The final and death phase of this cultural evolution Spengler defines as “Civilization” itself or the rule of the rational where only “the brain rules because the soul has abdicated.” As demonstrated throughout history, civilizations come and go and by World War I, Europe had achieved the high point in this cyclical experience and had no place to go but down.

As an inspiration to the young James Burnham, Spengler divided the existence of all things into a duality of the formal and the real, between the thinkers and the doers, the “sword side” and the “spindle side” which at the end of its endless cycle returns to formlessness. To Spengler and to Burnham, the final phase of civilization comes as democracy gives way to what Burnham called the Oligarchy, but Spengler referred to as Caesarism. It is a place in which the once vibrant institutions of civilization have become spiritually dead, money has become valueless, and all the wars are cruel private wars waged by tyrants for the private possession of the world.

Between the Hamburg crowd’s protest under the banner of Welcome to Hell, and Donald Trump’s challenge to the Europeans whether the West had the “Will to Survive” the time has come for Americans to ask themselves some important questions; what then is this entity called the West that is disintegrating? Could this miserable ending have been avoided? And who and what exactly are responsible for bringing us to these gates of hell?

To Spengler, Western civilization was always a Faustian bargain. “In the poetry of the West, Faustian Man figures, first as Parzeval or Tristan, then (modified always into harmony with the epoch) as Hamlet, Don Quixote, Don Juan and eventually Faust or Werther.” Having already sold his soul to the devil, Western Man has been freed to decide his own fate.

From Spengler to James Burnham to Patrick Buchanan, the school of 20th century conservative and neoconservative/fascist thought has blamed the West’s decline on the betrayal of this contract by “soft” liberal values.

The Third Reich promised to turn the clock back by crushing the communist heresy and returning Germany to its martial glories of the past. Hitler’s invasion of Russia was named Operation Barbarossa after Holy Roman Emperor Frederick Barbarossa’s 12th century Crusade. But instead of a German renewal, Hitler’s scheme to thwart the end only brought it nearer.

The post-Vietnam rise of Ronald Reagan and the new right promised an ideological revival as well, a return to core conservative values and a new morning in America. In practice Reagan’s anti-government policies, his massive and unnecessary defense buildup and reckless trickle-down economics hastened its decline by decades, and in the end destroyed the fabric of American society.

As it was in the past and remains now, the Right’s use of Machiavellian tactics to turn the tide in its favor almost always works, and in the end invariably winds up bringing down the house. The bitter philosophical conflict between idealism (form) and reality and what constitutes a just society goes back to the origin of Western thought and has produced profound political contradictions throughout the centuries.

The arch neoconservative Jeane Kirkpatrick argued back in 1979 in an essay regarding the emerging New Class in American politics,

“The goal of the new-class reformer—whether of Left or Right—is to bring the real into conformity with the ideal (that is, with an idea of reality), [which] manifests a broader belief that social institutions can and should conform to and serve abstract principles. The most serious problems with this rationalist approach were recognized by Aristotle, who criticized Plato’s blueprint for the ideal state… Aristotle also argued that experience and law were better guides than reason alone to the good society and that Plato’s proposal would sacrifice real goods to illusory ideals.”

Kirkpatrick’s essay on the dangers of idealism should stand as a textbook study for James Burnham’s Machiavellians. Kirkpatrick would soon become the Reagan administration’s spokeswoman at the UN for the new neoconservative class with its emphasis on “illusory ideals” of a worldwide democratic revolution and service to abstract principles over experience and the law.

But, as laid out by James Burnham in his Machiavellians: Defenders of Freedom, the new Machiavellians must delude the masses with lies and outright fraud, if necessary, to maintain control.

Kirkpatrick’s “idea of reality” was shaped by a hybrid neoconservative/fascist ideology whose roots lay in the social chaos of the early 20th century – World War I, the breakup of the Austro-Hungarian Empire and the Trotskyist schism within Marxist/Leninism.

Supported by the Pentagon’s top brass from World War II forward and then brewed together by the CIA with Europe’s leftover fascist elites, Lenin’s followers metastasized from Trotskyist intellectuals into Defense Intellectuals. From the 1970s onward, they would become a self-perpetuating force for war inside both Democratic and Republican parties and a fifth column for undermining any thought of normal diplomatic relations with Russia.

The Reagan administration provided a platform for this new class of former Trotskyist who were willing to sacrifice anything real or imagined for their illusory ideals. But the ultimate success of their rise to power relied on more than just a Marxist dialectic of infiltration and subversion.

The neoconservative political takeover of the 1970s was made possible by a network of old right-wing European and American interests dedicated to overthrowing Western democracies and replacing them with a new class of fascist transnational elites. These elites, currently referred to as globalists but prior to World War II as Synarchists, have long plotted the overthrow of the nation state, and promoted rule by a one world government.

But none of it could have happened without the covert assistance of rogue right-wing factions of the West’s intelligence services and a brutal but sophisticated propaganda campaign backed by the CIA, to control the West’s perceptions of what that world would look like.

Join us for Part 3 as we look at the synarchy of fascist organizations vying for power and influence prior to World War II and their revival and consolidation under an exclusive Cold War circle of corporate power aimed at eliminating the nation state and democracy.