“I set out alone, having neither fellow-travelers in whose companionship I might find cheer, nor caravan whose part I might join, but swayed by an overmastering impulse within me and a desire long-cherished in my bosom to visit these illustrious sanctuaries. So I braced my resolution to quit my dear ones, female and male, and forsook my home as birds forsake their nests. My parents being yet in the bonds of life, it weighed sorely upon me to part from them, and both they and I were afflicted with sorrow at this separation.”

Ibn Abdullah Mohamed bin Abdallah Allawat Al-Tanji Ibn Battuta was on 25 February 1304 born in the beautiful city of Tangier (one of my favorite cities), and died in Marinid-Morocco in 1369.

He is recognized around the world as one of the 10 most famous travelers in history, along with Neil Armstrong and his journey to the Moon, Fridtjof Nansen who crossed Greenland, Christopher Columbus who discovered the Americas, Xuazarg the Chinese Buddhist who traveled from China all the way to India, a journey of 17 years.

Then there are “Lewis and Clark” the great American explorers who discovered the territory known as the Northwest. Though Ernest Hemingway did not travel the world, he was a man of the world – a hunter, fisherman, a novelist, a soldier and hard-drinking man, who left a great legacy of literature and causes.

Marco Polo was also a great world traveler, who traveled from Venice to the land of Kublai Khan and the “Silk Road”, with Freyn Stark being the first woman to travel to Luristan region of Iran, (do not see how that makes her a great traveler).

In 30 years of travel, Ibn Battuta traveled to the East along the coast of North Africa on his first journey to Mecca for the Hajj. From Mecca, he traveled to Iraq and then to the Middle East, to Central Asia, Southeast Asia, Central Asia, China and Indonesia.

His journeys took him to the Black Sea area, then to Caspian and the Aral Sea; and the famous cities of Samarkand and Delhi; Sri Lanka and the Maldives. 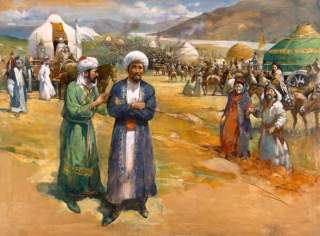 Not content with the travel East, he decided to explore and visit Africa, where he took off to the south and the Sahara Desert to present-day Mali and the city of Timbuktu.

At the behest of the ruler of Morocco of the time, he dictated his travel to the Muslin scholar Ibn Juzayy, entitled “A Gift to those who contemplate the wonders of cities and marvels of traveling.”

Ibn Battuta was an Ambassador of Peace; he was not a front for colonization as many of the Western travelers who explored Africa for the colonizing powers; and he was not a traveler to loot the treasure. He simply enjoyed world travel and exploring the diverse cultures of the Islamic empire of the time.