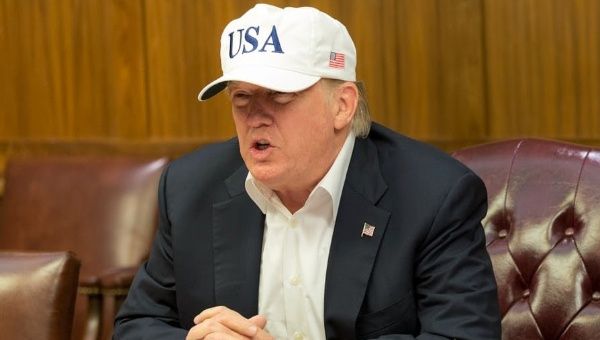 Trump has bragged that he is considered the “Ernest Hemingway of 140 characters,” but that didn’t prevent Mexico from shooting his suggestion down.

In the latest case of the White House announcing major policy decisions via Twitter, President Donald Trump has fired off another social media salvo at the North American Free Trade Agreement, NAFTA, while pledging once again to force the Mexican government to fund construction of a U.S.-Mexico border wall.

The Sunday morning tweets came days ahead of the second round of talks between the U.S., Canada and Mexico on a possible revamp of the free trade deal. Touted as a “renegotiation” by the White House and billed as a “modernization” by its NAFTA counterparts, the ambitious talks have already shown signs of deep divisions that will require major compromises by parties to the agreement.

In Trump’s tweet, the former reality television star speculated about the possibility of terminating the talks due to the “difficult” renegotiation with the Canadian and Mexican trade teams. Trump regularly refers to NAFTA as the “the worst trade deal maybe ever signed anywhere.”

Mexico’s Ministry of Foreign Affairs took the tweet in its stride, noting that it will continue “to be serious and constructive, always putting national interest ahead” and seeking a deal that is mutually agreeable to the three North American countries.

“Mexico will not negotiate NAFTA, nor any other aspect of the bilateral relationship through social networks or the media,” the statement added.

Trump also repeated his campaign pledge vowing that the U.S. would proceed in building “THE WALL” while “Mexico will pay for it through reimbursement/other.”

Trump has threatened to shut down the government if congressional Republicans fail to include funding for the barrier in a spending bill due by the end of September.

In a Jan. 27 phone call with Mexican President Enrique Peña Nieto, Trump beseeched him to stop publicly saying that Mexico wouldn’t pay for the wall, according to a recently-released transcript of the call.

“Believe it or not, this is the least important thing that we are talking about, but politically this might be the most important talk about,” the U.S. head of state told Peña Nieto.

“But the fact is we are both in a little bit of a political bind because I have to have Mexico pay for the wall — I have to,” he added. “We cannot say that anymore because if you are going to say that Mexico is not going to pay for the wall, then I do not want to meet with you guys anymore because I cannot live with that. I am willing to say that we will work it out, but that means it will come out in the wash and that is okay.”

Mexico’s Foreign Ministry reiterated in its statement that “as the Mexican government has always maintained, our country will not pay, under any circumstances, for a wall or physical barrier that is built on US territory along the border with Mexico. This determination is not part of a Mexican negotiating strategy, but a principle of national sovereignty and dignity.”

While critics have blasted President Trump’s early-morning habit of addressing important and trivial issues alike through the social network as unbecoming of the commander-in-chief, Trump has defended the practice as “not Presidential – it’s MODERN DAY PRESIDENTIAL.”

During his election campaign, Trump bragged that he is considered the “Ernest Hemingway of 140 characters,” adding that if one of his detractors says something bad about him, “bing bing bing — I say something really bad about them.”