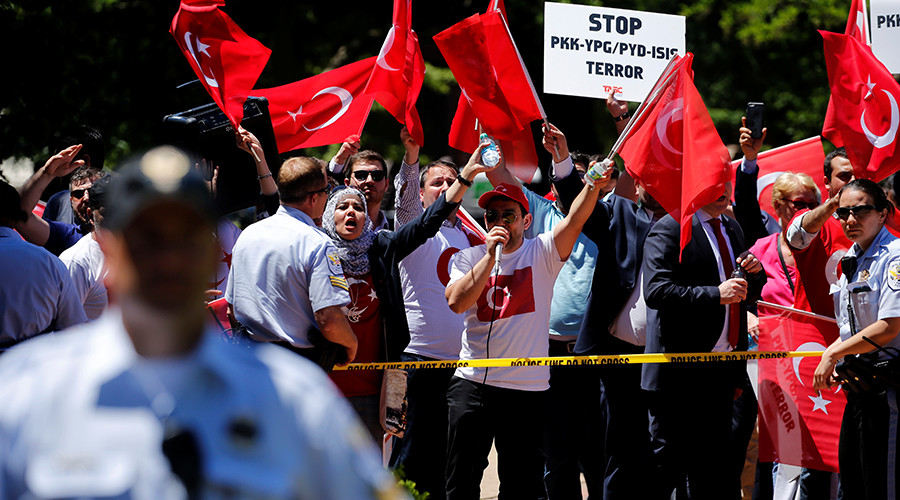 Russia Today: A group of pro-Erdogan demonstrators shout slogans at a group of anti-Erdogan Kurds in Lafayette Park as Turkey’s President Tayyip Erdogan met with U.S. President Donald Trump nearby at the White House in Washington, U.S. May 16, 2017. © Jonathan Ernst / Reuters

US authorities have indicted 19 people, including 15 Turkish security officials, for attacking peaceful protesters who rallied against the visit of President Recep Tayyip Erdogan outside the Turkish ambassador’s residence in Washington DC in May.

While 16 of the defendants had already been slapped with charges in June, Tuesday’s indictment by the US Attorney’s Office for the District of Columbia added three Turkish security officials to the list. They are Muhsin Kose, Yusuf Ayar and Harrettin Eren. 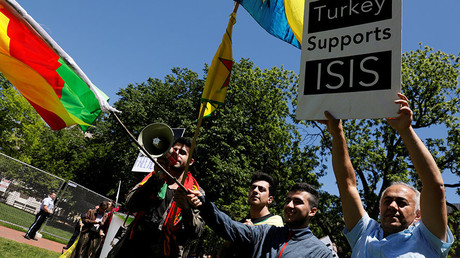 Overall, the indictments are brought against 15 Turkish security officials, two Turkish-American businessmen and two Canadian citizens. Seventeen of those accused remain at large while two of defendants who were arrested in June will face an initial court hearing on September 7.

“All 19 defendants were indicted on a charge of conspiracy to commit a crime of violence, with a bias crime enhancement,” the District of Columbia Attorney’s Office said in a statement, Reuters reports.

The charge carries a maximum sentence of 15 years in prison. At least other five defendants face additional charges of assault with a deadly weapon.

At least 12 people were injured in a brutal fight between supporters and opponents of Erdogan outside the Turkish ambassador’s residence in Washington, DC on May 16.

Footage from the scene showed men in suits viciously attacking a group of anti-Erdogan protesters, pushing them to the ground – men and women alike – and kicking some of them repeatedly in the head. Most of the attackers, the indictment states, were members of Erdogan’s security detail.

Following the brawl, the Turkish Embassy in DC accused the protesters of belonging to groups affiliated with the Kurdistan Workers’ Party (PKK), designated a terrorist organization by both Turkey and the US.

The attack, by “pro-Erdogan civilian supporters, Turkish security personnel, and staff members from the Turkish diplomatic delegation” was “based on the actual or perceived ethnicity and political affiliation” of the victims,” the document reads.