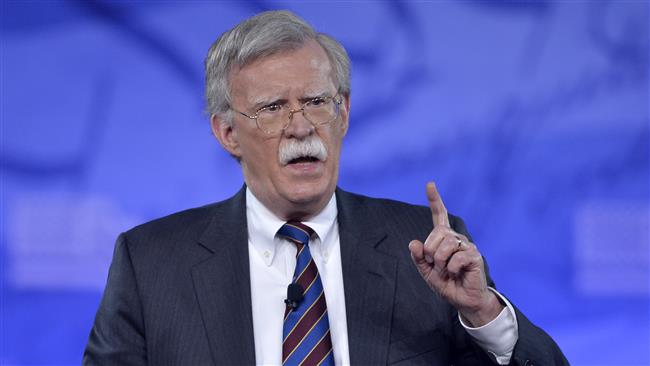 [ Editor’s Note: As the saying goes, the good may die young, but the wicked surely do not. Deep Stater John Bolton raises his craggy head one more time, compliments of the National Review, a long time proponent of “special interests”.

In what I can only view as an attempt at humor, Bolton claims he is only going public because Trump would not grant him an audience to set him straight on Iran. Imagine that. One of the signs that you are dealing with a Deep Stater is their incredible gall.

Another clue is their total denial of the abject failure of their anti-Iran Jihad, proven when all of their and Israel’s claims of a nuclear weapons-armed Iran turned out to be a complete hoax – a conspiratorial psyops actually. Some, like me, consider it an act of treason to attempt to take our country into war on completely false information.

Trump is showing signs of Dick Cheneyism with his pressuring US Intel to find something to use to breach the Iran nuclear deal. And I have to point out again that this is being done with virtually no one in media or anywhere else mentioning that the claims of Iran’s secret nuke program were a hoax. Not even Iran mentions this, when it is the biggest credibility crusher club that it has to use on provocateurs like Bolton.

What the Bolton crowd does not get is Iran does not stand alone now. Russia and China and Europe were fully behind the old Iran sanctions, and they are fully behind implementing the agreement now. We are seeing a kind of attempted coup to have the US break an international agreement, pushed by those who supported fabricated claims.

If you see any outrage over this from any of the US civic and security-related organizations, please let me know. All I can see is a barren wasteland, in terms of organizations willing to stand up to the oath of defending the country from all enemies, foreign and domestic. I thought we were supposed to learn from our mistakes, not repeat them, but maybe that is considered and old-fashioned sentiment now… JD ]

Iran’s foreign minister has slammed a “game plan” drawn up by a veteran US diplomat for the Washington administration to exit the 2015 multilateral nuclear agreement, saying John Bolton’s strategy would only lead to “a fiasco” for the United States.

“This plan will definitely be a huge failure for the United States and it will lead to the further isolation of America in the international arena,” Mohammad Javad Zarif said in a Wednesday interview.

Bolton, a hawkish ally of US President Donald Trump, elaborated on what he called the game plan in an op-ed published on Monday in the National Review, laying out a “strategy” for the campaign to leave the Iran deal and “its execution.”

He openly stated that he shares Trump’s strong antipathy toward the 2015 the nuclear deal, called the Joint Comprehensive Plan of Action (JCPOA), between Iran and six world powers, including the US.

He claimed the plan had to be presented publicly, as Trump declined to meet him and receive his suggestions regarding the issue amid staff changes at the White House.

Zarif pointed to Bolton’s previous plan over a decade ago to halt Iran’s uranium enrichment program, saying, “Mr. Bolton should remember that if his policy had been successful, the US would not have had to come to the negotiating table with Iran after 10 year of pursuing that policy and reach an agreement.”

The Iranian foreign minister argued that Washington’s decade-long pursuit of Bolton-engineered policy to halt Iran’s uranium enrichment eventually had no result but a significant increase in the number of Iran’s centrifuges from 200 to nearly 20,000.

This shows that pressure and sanctions will not affect the political will of the Iranian nation, Zarif said.

Trump President took over from his Barack Obama as America’s leader in January. He rose to power mainly on the platform of undoing every major policy achievement of the former administration.

Trump intensely campaigned against the Iran deal and remains a steadfast critic of the landmark deal, which is viewed internationally as a major win for diplomacy; however, Iran’s full compliance has forced the US president to twice certify the deal to Congress.

The International Atomic Energy Agency (IAEA), tasked with monitoring Iranian compliance, has consistently verified that Iran has been holding up its end of the bargain.

In what is seen by analysts as an attempt to find pretexts to escape a third certification, the new US administration is currently lobbying with the IAEA to request access to Iranian military sites as part of the deal.

Trump has also set up a team of his White House confidantes to present him with “options” other than certifying Iranian compliance with the deal to the Congress. Such certification is needed by US law every 90 days in order for the Congress to continue to withhold nuclear-related sanctions against Iran, itself a US commitment under the JCPOA.

The White House is also pressuring intelligence officials in the United States to produce intelligence that could be used to declare Iran in violation of a nuclear deal the president despises.