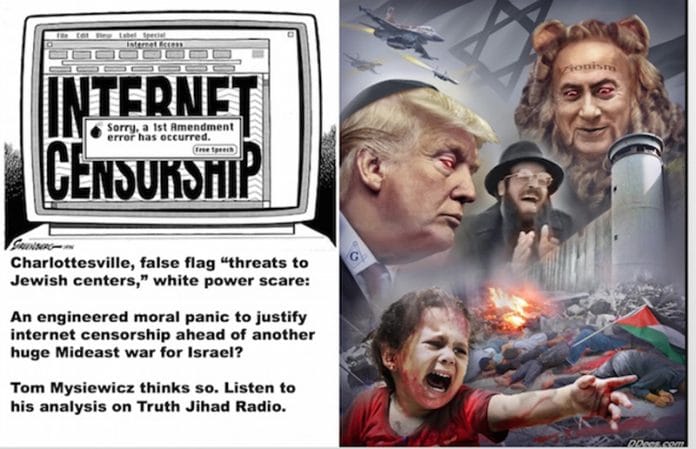 Broadcast on August 30th. All my shows are archived at my Patreon page – please consider subscribing!

Tom Mysiewicz – who worked in IT before it was fashionable, and later was hounded out of mainstream journalism by political censors  – has an interesting take on Charlottesville:

“As for the actual provocateur in Charlottesville, we are now hearing reports that his case is similar to the recent Varnell indictment. That alleged white nationalist/racist supposedly wanted to bomb banks and the Federal Reserve yet the car he drove was not his, he had no driver’s license, he was in an adult guardianship, that he was given the car by the FBI who groomed him, that he had been repeatedly institutionalized. (We hear nothing about Fields in the Charlottesville case, likely because his records were sealed under HIPAA, which is likely as you are hearing little or nothing about him.) How could Mr. Trump—apparently ready to launch a massive Afghan incursion (on behalf of Eretz Israel and the Bush opium trade) despite his campaigning like Roosevelt and Wilson before him on a peace platform–be unaware of this? Answer: He can’t be.”

Tom and I have our areas of disagreement. We argue a bit during this show, as Tom offers his take on the “Confederate monuments” and “white nationalism” issues. But disagreements aside, I have to admit that Tom is a very sharp guy who can offer arguments and evidence for his views. What’s more, his analysis of who put Trump in office, how, and why – and how it fits in to this year’s wave of internet censorship (in preparation for a big Middle Eastern war?) – is frighteningly plausible.

Check out Tom’s new article Why the Right Should NOT Unite.