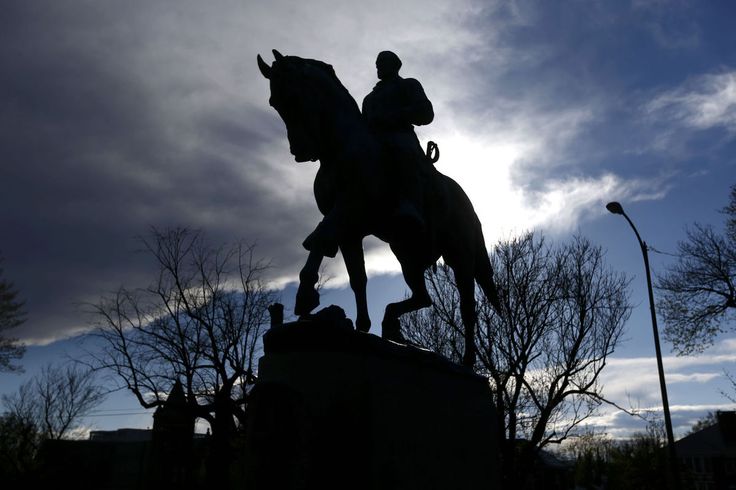 [ Editor’s Note: Phil Butler unleashed his artillery all the way from Germany onto the historical head-choppers at the Washington Post. These cyclical anti-Confederate jihads we have been experiencing for the last 25 years, usually NAACP inspired, purely for the free publicity, have always fizzled out. And they tended to be local or statewide at most.

This time with Charlottesville Virginia, we saw a new campaign primed and ready to go. And this one seems to have a “one-upsmanship” aspect to it, as in who can say the stupidest thing about America’s Civil War. The Washington Post has taken a shot at Lee himself, trying to win the brass ring.

Opinion writer Richard Cohen takes a cheap shot with the slavery under-the-belt punch on Lee, when he has no problem with Israel’s modern neo-slavery of the Palestinian people. How’s that for some chutzpah?

I have a problem with educated people acting really really stupid, especially highly paid ones in jobs that had huge competition to get, like getting opinion slots in big city newspapers. But I have the kryptonite for Cohen and the WP, Edmund Burke’s holy grail heritage quote for all time:

“Society is an open-ended partnership between generations. The dead, and the not yet born, are as much a part of society as the living. To dishonor the dead is to reject the relationship upon which society is built, the relationship of obligation between generations. Those who have lost respect for the dead have ceased to be trustees of their inheritance.”

Nothing really needs to added to Burke’s quote. Cohen is an amoeba compared to Burke, and to Lee, of course.

Phil Butler is onto the psyops aspect of the “Confederate monuments glorify slavery” nonsense. This glorify charge has never been made before, showing that scriptwriters, possibly from a certain ethnic group, are at work here. The first Confederate veterans were not into monuments. They were not really into even talking about the war. They wanted to forget about it all.

It was Southern women, including lots of widows, who began pushing the monuments. In Atlanta, they sold pies and cakes for three years to raise the money to have all the straggler Confederate remains of those buried where they fell disinterred and brought to Oakland cemetery for a mass burial of the bones, all 3000 unknowns.

The famous Lion of Atlanta monument would come later, but it would never get an historical marker telling tourists that 3000 Confederates lay beneath it. Why? The good folks of color in Atlanta City government said “screw them”.

They of course would not know who Edmund Burke is, nor understand the quote, even after reading twice. And there are a lot more where they came from, including the Washington Post. If anyone is wondering, I am a Son of  a Confederate Veteran, many of them actually, through my mother’s family, Culpeppers, Saterfiels, Hodges, Ethridges, and Yarbroughs, more than I can count.

This fall, I will bury my Southern mother in Arlington Cemetery, compliments of her first husband Leon Miller, a WWII Yankee veteran, KIA when she was sixteen. She will join a Vietnam-veteran son buried there.

I knew almost nothing about my Confederate heritage until 1996, when I found nother’s cousin’s Culpepper genealogy book at her house. So I was a late bloomer, and have since tried to make up for it, and where my VT work has always been part of that effort… Jim W. Dean ]

The utter deconstruct of the United States of America is underway. Those American “values” former President Barack Obama and his cadre parroted at us, they’ll soon be lost like tears in rain. Charlottesville, Virginia and the hysterical liberal response to those events, are of a foreboding all Americans should fear.

Everyone with the sense God gave a goose knows that Jeff Bezos’ turned the Washington Post into a wretched rag of a newspaper from the moment he took it over.

But an opinion piece entitled “Robert E. Lee is worth remembering. Just don’t honor him” by Richard Cohen is cause to burn the once venerable clarion to the ground.

Twenty years ago I’d have made the trip to the WP’s doorstep to ignite the bonfire myself. Cohen’s character assassination of one of America’s most venerated heroes is a pitiful reminder that money is the kindling to all manner of caddish hatred.

While I shall not waste one more sentence in description of this misogynist, lying scoundrel of a syndicated columnist. I will however offer to meet him at a time of his choosing on the field of honor, confident in my own ability with whatever weapons he chooses. What a piece of work this man is.

“A true man of honor feels humbled himself when he cannot help humbling others.” — Robert E. Lee

Robert E. Lee, the man for whom the Charlottesville, Virginia statue was erected, is not a symbol of racism, but the liberal zealots who’ve infested our great nation are using this as a final wedge to further polarize a nation. The vilification of such a character as Lee, a man who represents all that was good during America’s most critical moment, is an affront to honor and dignity everywhere.

Tragic events during demonstrations in Charlottesville, the death of one poor woman, are now fuel for a plastering over of American history. Worse still, the mission of the instigators will end in a new kind of civil war. If Americans stand by and watch this time, nothing will remain of “We the People” except the veritable Sodom and Gomorrah people like Bezos, George Soros, and their handlers perceive. Robert E. Lee removed – what manner of madness is this?

Now they have taken down a statue of Lee that was vandalized. This was ostensibly done in order to “protect” the greater Duke Chapel where the statue stood.

Durham, North Carolina has been in the spotlight over Confederate statues after protesters tore down a bronze Confederate soldier in front of a government there earlier.

My fear is that soon, very soon, this wedge of fueled hatred and ignorance will reach deep into the soul of the American south, and then across the nation.

The socioeconomic disparity wrought by the Bush and Obama administrations rekindled racial tensions dramatically, and now the injured public is being set in upon itself, even though most cannot fathom it. Ripping down venerable and adored figures, the symbols of rightful honor, this is no happenstance.

“I have fought against the people of the North because I believed they were seeking to wrest from the South its dearest rights. But I have never cherished toward them bitter or vindictive feelings, and I have never seen the day when I did not pray for them.” — Robert E. Lee

Like in every other globalist strategy, the ultra-liberal oligarchs in America are using a stressed and confused, even desperate citizenry to create conflict. Inside the US, heavy economic forces are at work trying to reconcile the irreconcilable. The country is broke, but steaming ahead as if the coal bunkers were still full. Washington, the “swamp” Donald Trump swore to empty, is a sinkhole that will take America down with it.

Every American knows this, but universal apathy signals our doom. Abroad, policies toward Russia and China and our European allies threaten insurmountable global crisis, and the “narrative” the Washington Post broadcasts mirrors the domestic mission of the technocrats. If you read it all, then step back and think, then “Russia Bad” or “Putin Bad” is exactly the same message as “Robert E. Lee Bad” and “Jeff Bezos Good”.

A fraud of a “Texas Boy”, Bezos allowing this madness in his newspaper is traitorous. I needn’t defend General Lee, the annals of history (the real ones) accomplish this well. Bezos and his ilk are amoral, agnostic to the slightest semblance of decency, for the ignore the legacy of millions on millions of Americans who hold Lee and his captains so dear.

“I tremble for my country when I hear of confidence expressed in me. I know too well my weakness, that our only hope is in God.” Robert E. Lee

A final note on the Washington Post scoundrel Richard Cohen and his assertions Lee was a brutal slaveholder comes from a 1934 quote by historian Douglas S. Freeman which describes the venerable general’s place and situation at the time:

“There is no evidence, direct or indirect, that Lee ever had them or any other Negroes flogged. The usage at Arlington and elsewhere in Virginia among people of Lee’s station forbade such a thing.”

The suggestion that a man of Lee’s station and character could hazard so far as to be cruel as his detractors claim is ludicrous at best. Any genuine account of the character of Robert E. Lee, who was once the Commandant at West Point, will reveal Lee’s family connections to George Washington, a position which made him what the author of “The Perfect Gentleman”, Bernice-Marie Yates called “a prime target for abolitionists who lacked all the facts of the situation.”

Finally, Robert E. Lee is the most recent target of a conspiracy to undermine the once great ideals of a legendary nation. Anyone who cannot see this is either blind or stupid. When Donald Trump wrested the presidency from Hillary Clinton, the hounds of liberal hell were unleashed.

This is not even open for interpretation. The technocrats, the Washington swamp, the Western oligarchs and mafia men all set out to handcuff or destroy Trump and his constituency. And Lee is an icon of that constituency. The bottom line here is, with Trump firmly shackled by the Zionist lobby and the technocrats, the enemy of the globalists is the constituency and all our venerable ideas.

Robert E. Lee is the most logical target of these henchmen of “God Knows”. America is sinking, and one bright banner on her mast is already underwater. God bless Robert E. Lee and the spirit he represented.

Phil Butler, is a policy investigator and analyst, a political scientist and expert on Eastern Europe, exclusively for the online magazine “New Eastern Outlook”.
https://journal-neo.org/2017/08/30/america-s-final-fatal-destiny-dishonoring-robert-e-lee/