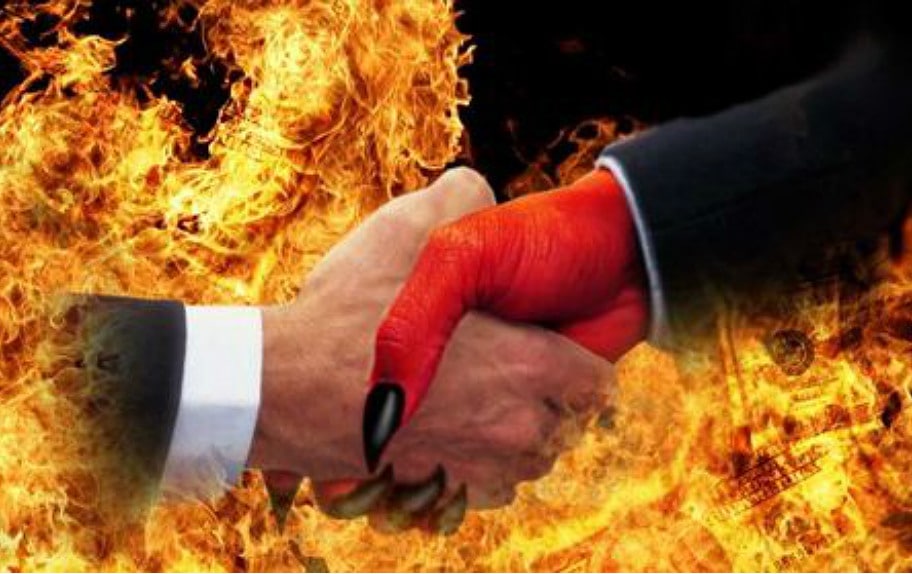 This is Part 3 of a four-part series. Part 1 and Part 2 are linked here and at the end of the article.

Democracy and freedom of expression are under attack. There is blood in the streets. How did it get that way? Where did it come from, what are its sources and what continues to drive it? This four part series will look at the origin of those sources and unlock connections that when understood should open doors of perception that have been locked shut for far too long.

“It seems to me there is a difference here between facts and perceptions, and this seems to be where the problem ultimately lies. Of course, perception is reality, as far as policy makers are concerned, so what you believe, in fact, drives what you do regardless of what the facts are.”

It’s vital to remember Dr. Gary Sick’s observation at this moment in our latest deep-state-anti-Russia identity crisis. After 16 years of war accompanied by political and financial crises, America finds itself in a war of perception with the world and with itself. If America’s policy-makers continue to think they can create reality regardless of facts, then whatever today’s policy makers choose to see as real, they will try to make real. It’s a simple formula for delusional thinking with a history of terrible consequences.

In the 1950s, some of America’s more creative defense intellectuals perceived Vietnam to be the linchpin of what they called the Domino Theory of a global communist expansion, all the while ignoring the nationalist motivations of the North Vietnamese. That misperception, intentional or not, led to one of the greatest military blunders in history, as well as devastating consequences for the community of defense intellectuals that had thought it up.

As described by author Fred Kaplan, “Vietnam brought out the dark side of nearly everyone inside America’s national security machine. And it exposed something seamy and disturbing about the very enterprise of the defense intellectuals. It revealed that the concept of force underlying all their formulations and scenarios was an abstraction, practically useless as a guide to action.”

Vietnam revealed a conceptual failure in an esoteric system of analysis created by an inbred group of defense intellectuals that was supposed to determine what was real and what was imagined.

By 1968, its failure had broken the eastern establishment’s hold over foreign policy and created the need to open détente with the Soviet Union. But for those on the right who had fought to roll back the very existence of the Soviet Union since its inception in 1917, détente was not an option and would be fought by a sophisticated Cold War propaganda machine that would outdo Nazi Germany.

Origins of a Plot

The popular perception that the United States and the Soviet Union were allies against Fascism during World War II disguises the fact that Wall Street’s financial elites were not so secretly supporting the rearmament of Germany after World War I and were especially active in backing Adolph Hitler and the growth of the Nazi Wehrmacht prior to and throughout the war years.

According to Anthony C. Sutton in his 1976 book, Wall Street and the Rise Of Hitler,

“The build-up for European war both before and after 1933 was in great part due to Wall Street financial assistance in the 1920s to create a German cartel system, and to technical assistance from well-known American firms… to build the German Wehrmacht… In brief, American companies associated with the Morgan-Rockefeller international investment bankers… were intimately related to the growth of Nazi industry… those firms controlled through the handful of financial houses, the Federal Reserve Bank system, the Bank for International Settlements, and their continuing international cooperative arrangements and cartels which attempt to control the course of world politics and economics.”

A World War II study on Nazi-occupied France published in 1947 by Harvard University’s William L. Langer, Chief of the Research and Analysis branch of the Office of Strategic Services, OSS, from 1942 to 1945 revealed the origins of a prewar Fascist-plot that may have paved the way for France’s early capitulation in the war.

Langer’s report detailed in his book Our Vichy Gamble makes clear that the prewar ideological and nationalist lines between fascist Germany and France were never at issue when it came to Europe’s big business interests. On the contrary; if successful, the plot’s French backers stood to benefit immensely from a German-ruled Europe.

“Germany could count on more than enough eager supporters among French industrial and banking interests—in short, among those who even before the war had turned to Nazi Germany and had looked to Hitler as the savior of Europe from Communism… These people were as good fascists as any in Europe… Many of them had long had extensive and intimate business relations with German interests and were still dreaming of a new system of ‘synarchy,’ which meant government of Europe on fascist principles by an international brotherhood of financiers and industrialists.”

The brotherhood of synarchists was not the only hard right-wing European group dreaming of a pan-European Union along fascist lines. In London in the mid-1930s, an alliance of militant émigré groups from 16 Central European countries formed a secret international Catholic organization headed by a former Tsarist general. Known at the time as Intermarium (and again today) for that part of Europe bordered by the Adriatic, the Baltic, Black, Aegean and Ionian seas, its secret mission was to form an anti-Communist cordon sanitaire against Russia.

“The dream of a postwar [World War I] Pan-Danubian [Con]Federation from the Baltic to the Aegean under Habsburg rule – a sort of recreation of the Austro-Hungarian Empire – was kept alive under the direction of the pretender to the throne Archduke Otto von Habsburg. The Monarchists had had the enthusiastic support of Winston Churchill, who, like many of its adherents, had been a member of the Brussels-based right-wing Pan European Union (PEU), founded in 1922 by Hapsburg and Count Richard Coudenhove-Kalergi as ‘the only way of guarding against an eventual world hegemony by Russia’.”

Another, even more militant group was the Promethean League of the Nations subjugated by Moscow (soon to be shortened to the Promethean League) which focused mainly on liberating the non-Russian ethnicities in Ukraine and Georgia. The end of World War I and the collapse of the Austro-Hungarian Empire had left Poland in charge of Western Ukraine which, according to author Dorril’s sources, sparked Polish ambitions to launch an anti-communist counter revolution inside Russia and capture its own empire.

“The League ‘played a large part in Polish aspirations for the development of a bloc of states in Eastern Europe, stretching from Finland to the Caucasus, in which Poland could become a true great power by exercising her ‘natural’ position of leadership.’”

Despite Poland’s “‘natural’ position of leadership,” her occupation of Western Ukraine came up against the fiercely racist Galician separatists of the Organization of Ukrainian Nationalists (OUN).

OUN viewed their own racial beliefs as more in league with Germany’s National Socialists (Nazis) than anything Poland had to offer or even Europe’s more doctrinaire Fascists and Nazi money soon came pouring in. The OUN rejected the Promethean League outright and struck out at Poland’s leadership role.

In 1934 OUN’s leaders, Stefan Bandera, Yarolsav Stetsko and Mykola Lebed were arrested by Polish authorities for the murder of the Polish Interior minister and sentenced to death only to later have their sentences reduced to life in prison. But while the League of Nations branded the OUN a “terrorist syndicate” British Intelligence’s head of station in Finland, MI6’s Harry Carr, recruited Bandera’s followers.

From the mid-1930s onward, MI6 joined in funding the Galician OEN’s anti-Soviet terror operations together with Germany’s military intelligence unit, the Abwehr.

The OUN-B (B for Bandera) would go on to establish their reputation for cruelty as Waffen SS extermination squads during operation Barbarossa.

Whether Carr was aware of the Nazi support for OUN or perhaps even coordinated with them is still an open question, but as of 1934 British and German sympathies for Eastern Europe’s terrorists were clearly on the same page when it came to Russia; and it didn’t end with a random and isolated MI6 station chief.

As with their French associates, influential right-wing networks within Britain’s intelligence services found common cause with Eastern Europe’s fascist anti-communist resistance movements, even after the Soviets became Britain’s ally in 1941.

One group within the right-wing of the Conservative Party, the Imperial Policy Group (IPG) which maintained strong ties to the head of the Polish government-in-exile, General Wladyslaw Sikorski, was even known to favor a Nazi victory to that of the Soviet Union. Authoritarian but not outwardly Fascist prior to the war, Intermarium immediately joined up with Nazi intelligence following German occupation and remained so throughout the war.

By the end of 1944, MI6 was actively recruiting known collaborators and fascists amongst all the exile organizations and, as Soviet troops moved from the east, they would be activated to provide intelligence, propaganda and operational support for what London was certain was a coming war against Moscow.

Join us for Part 4 as we explore the post-World War II merger of anti-Soviet covert forces and the emergence of an elite intelligence operation known as the Cercle, which would secretly begin the process of shifting the West’s political dialogue away from the center and toward their extreme Fascist right-wing views.