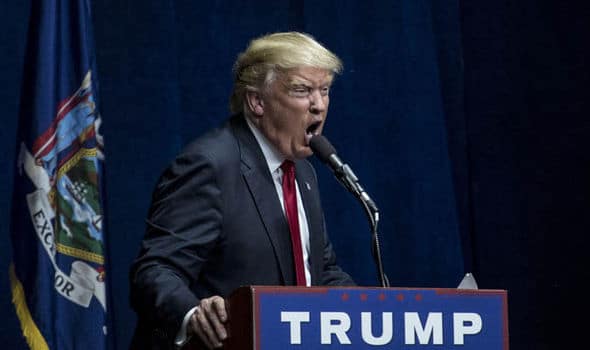 
During a speech last week, Trump declared that “vast amounts” of money and energy are being used to refine “our nuclear arsenal and missile defense.”[1] It was reported that

“Last week, the Air Force announced major new contracts for an overhaul of the American nuclear force: $1.8 billion for initial development of a highly stealthy nuclear cruise missile, and nearly $700 million to begin replacing the 40-year-old Minuteman missiles in silos across the United States.”[2]

Can you imagine a country in the Middle East (except Israel) or Asia bragging about building nuclear missiles? Aren’t we having a serious confrontation with North Korea at this present moment because they have allegedly bragged about building nuclear missiles? Why can Trump brag about having more nuclear weapons and building while North Korea cannot? Kim Jung-un can go mad, but United States officials cannot?

Here we are not supporting North Korea by any stretch of imagination. But the United States and much of the Zionist West need to start realizing that the world isn’t stupid. One needn’t be a logician or intellectual to see double standards in the political landscape. It’s just about everywhere in Washington. If Trump cannot universalize the nuclear missile thing, as Kant would have put it, why can’t he see that he is swimming in a torrent of contradictions? Do you now see why Russian officials aren’t taking the United States seriously?

The report continues to say:

“While both programs were developed during the Obama years, the Trump administration has seized on them, with only passing nods to the debate about whether either is necessary or wise. They are the first steps in a broader remaking of the nuclear arsenal — and the bombers, submarines and missiles that deliver the weapons — that the government estimated during Mr. Obama’s tenure would ultimately cost $1 trillion or more.”[3]

Can Trump seriously tell us that the average American is going to benefit from spending at least a trillion dollars on nuclear missiles? No one in the administration can explain these phenomena because we are living in a world in which ideology takes precedence over practical reason. And this is one reason why Russian officials aren’t taking the United States seriously at all. Russian Foreign Minister Sergey Lavrov has recently said that

“As you know, it takes two to tango, but it seems to me that our [US] partners keep performing individual breakdance.”[4]

If you want to see what I’m talking about, then just get a microphone and start interviewing the people you randomly meet even in your area. Ask them about who the enemy of the United States is. The majority of them will probably say “Muslims.” Then proceed to ask them, “How many Muslim civilians died in Iraq just last month?”

The answer may surprise you.

At least 333 civilians lost their precious lives in Iraq alone last month.[5] If puppets in the Zionist media are really concerned about what is really going on in the Middle East, why don’t they report these facts? Why don’t so-called alternative media personalities like Alex Jones and Paul Joseph Watson at least tell their listeners some of these uncomfortable but true things? Why don’t those people stop living in a fantasy world?