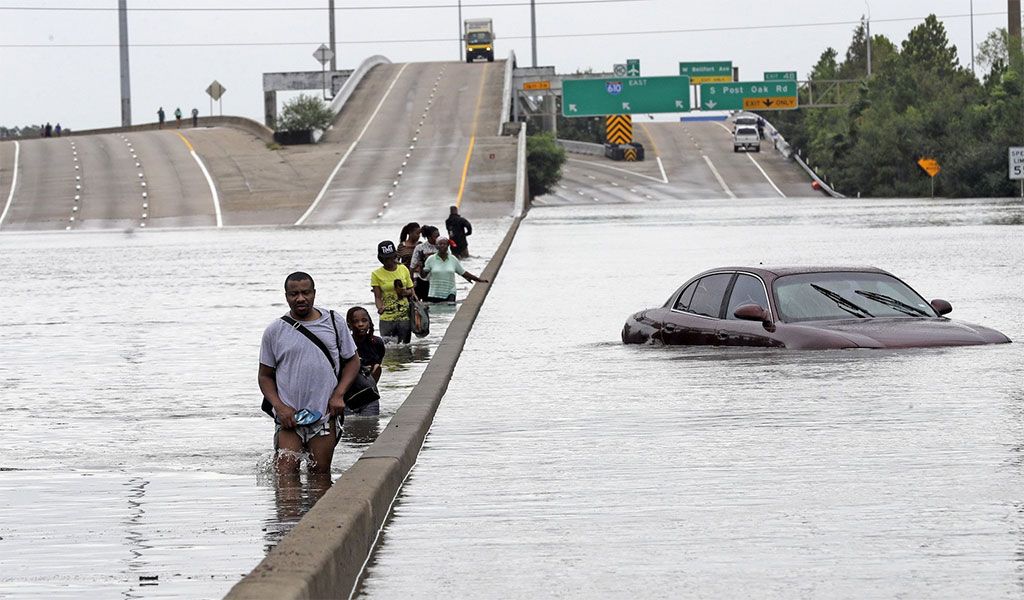 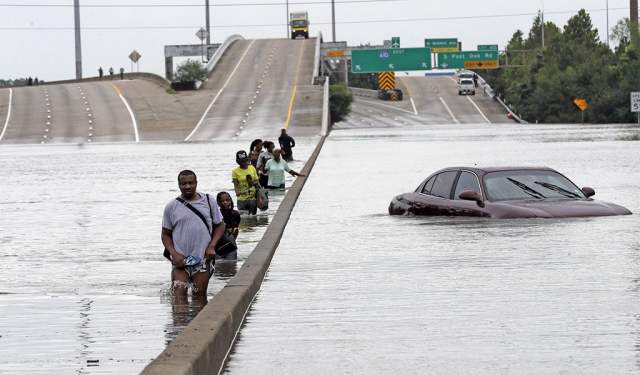 __________
Telesur
Harvey killed at least 30 and losses in Texas could reach US$ 100bn; half a million claiming federal assistance

The costs of the deadly storm in Texas and the Gulf of Mexico continued to mount on Thursday, with some analysts estimating losses that approach US$100bn. Harvey has killed more than 30 people and destroyed thousands of homes. Many firms in the region, a major transport hub that is a home to the oil and gas industry, don’t know when they will resume normal operations.

Risk Management Solutions, which works with insurance companies, estimates direct losses could reach US$90bn. Moody’s Analytics has estimated damage at about US$75bn, but the figures could rise.

While the rain has shifted away from Houston, many parts of the city remain underwater.

“The flood waters haven’t receded yet, so it’s very difficult to know what exactly the damage is,” said Tom Sabbatelli, senior product manager for RSM.

Harvey, which started as a hurricane, dumped unprecedented rainfall on United States’ fourth largest city and one of the country’s major economic engines.

The storm struck at the heart of America’s oil and gas industry, knocking a fifth of all US production offline, closing refineries around the Gulf Coast, and causing major pipelines that move fuel to other markets to shut.

Petrol prices, which increased in anticipation of the storm, are expected to continue to rise, despite additional shipments from overseas. In Texas, shortages at stations in some areas have been reported.

Mansfield Oil Company, a wholesale gas supplier, is trying to bolster its supplies by bringing in fuel by truck, rail – even ships, depending on the market. They said getting the Houston-area refineries back up will be key.

Colonial Pipeline said it expects to re-open its Houston line by Sunday, but other firms said they don’t know when normal operations might resume.

“Given the unprecedented flooding in the city of Port Arthur, it remains uncertain how quickly the flood waters will recede, so we cannot provide a timeline for restart at this time,” said Motiva, which runs one of the biggest refineries. “Our priority remains the safety of our employees and community.”

Fires from organic peroxides were reported at the Crosby plant of chemical company Arkema and more were expected, after flooding overwhelmed the firm’s back-up generators and refrigerators designed to keep the materials cool failed. The plant was six feet underwater, the company said.

Shutdowns of other facilities have led to releases of pollutants, while water has overwhelmed Houston’s sewers. The structural integrity of reservoirs are also being monitored, the White House said.

Partial service has resumed at Houston airports and the port is expected to open for limited business on Friday, but parts of the Houston Ship Channel, which provides access to refineries, remain off-limits.

The majority of the damage has been felt by families, who are likely to be grappling with the financial hit without insurance. More than 350,000 people have registered for assistance from the federal government, said FEMA.

More than 37,000 people have also filed claims to the National Flood Insurance Program by mid-Thursday. Analysts say they expect that number to rise to about 500,000.

“A lack of flood insurance for homeowners will prevent the type of full-scale reconstruction effort that might otherwise be expected,” Moody’s wrote. “This could have significant long-term ramifications.”

The Houston region is responsible for more than US$500bn in economic activity annually. AccuWeather expects the storm to shave a full percentage point off GDP over 12 months and lead the Federal Reserve to hold off on raising interest rates.

Macroeconomic Advisers is forecasting that lower production as a result of the storm could reduce third quarter GDP by 0.3% -1.2%, depending on how long the recovery takes.

But senior economist Ben Herzon says money spent on reconstruction should help boost the figures in later months. He’s hopeful that the impact will fall on the smaller end of the scale.