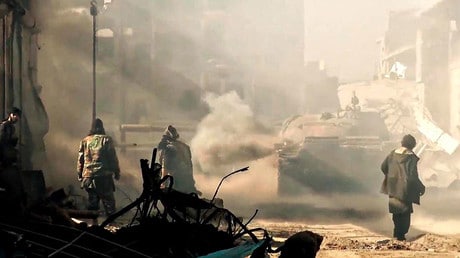 Russia Today: Not only were the US-backed ‘moderate’ militants in southern Syria never meant to fight ISIS, but their commanders actually traded US-made weapons and ammunition to terrorists, a rebel defector claimed in an interview with Rossiya-24.

Asaad As-Salem says he defected from the US-backed Maghawir al-Thawra group stationed at the At-Tanf base in southern Syria, and surrendered to Syrian government forces. Along with a number of other militants and their families, they escaped At-Tanf and currently reside in a refugee camp near Damascus.


The former militant told Rossiya-24 correspondent Eugeniy Poddubny that he served as a chief security officer at the base, and that he and his men joined the US-backed rebel group to fight Islamic State (IS, formerly ISIS/ISIL) terrorists.

Their US and Norwegian instructors, stationed at the base, taught the militants to fire US-made weapons, trained mortar squads and conducted courses on accident-free driving on the battlefield.

The reality, however, differed from the proclaimed goal of fighting terrorists, as the unit has never seen action against IS and its commander actually traded the US-supplied weapons with the terrorists – all while the American instructors, deployed at the base, turned a blind eye, the former militant claimed.

“When we learned that our unit’s leader was selling weapons to ISIS terrorists, we reported that to American base command, but following our report no action has been taken, the Americans only ramped up the support to the man who was appointed our commander and who was dealing with ISIS,” As-Salem said.

“And he was selling all sorts of weapons our unit possessed, US-made small arms, M-16 and M-4 rifles, recoilless rifles, various machine guns and ammunition for them.”

The areas controlled by the US-backed militants along the Syrian-Jordanian border were cut off from IS-held regions by Syrian government forces and its allies in June, rendering their declared goal of “fighting terrorism” entirely obsolete.

The US, the former militant believes, never actually intended to battle IS in the south of Syria, but wanted to create and expand its influence. He said the US advisors supported only those who can be used to fulfill their own goals, showing no interest in helping civilians.

“There’s no support for the local populace, the Americans are not interested in anything except pursuing their own goals. There’s a refugee camp, Rukhban, for example, located some 20 kilometers from the American military base…” As-Salem told Rossiya-24. 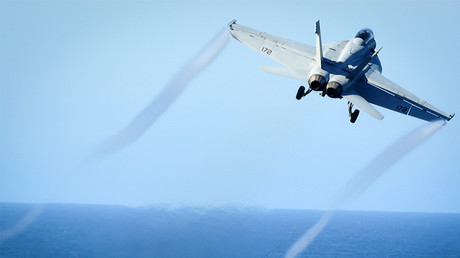 
“Some of the people residing in the camp are relatives of those militants, collaborating with Americans, while the others are civilians from At-Tanf. There are no suitable living conditions there, children have nowhere to study, there’s no healthcare, the Americans support only those people who they use to pursue their own goals. All in all, I’ll tell you, they behave like invaders.”

Although the militant’s claims cannot be independently verified, US special forces have indeed, since last year, been based at At-Tanf, located at a strategic Syrian highway border crossing with Iraq.

While the US-led coalition claimed the base was used to fight against Islamic State – they have, on several occasions, opened fire on Syrian government forces approaching the area.

Russia’s foreign ministry spokeswoman Maria Zakharova said at a news briefing Thursday that the information obtained by the Rossia-24 correspondents should be thoroughly examined by international organizations.

“Certainly those materials need thorough examination by competent organizations, including international organizations. These materials tell us that the American coalition, the so-called coalition, does not what was proclaimed, i.e. not fighting terrorists in the southern Syria, but pursues its own goals,” Zakharova said.

“One of the goals is creation of their own sphere of influence in the country, exhausted in the fight against terrorism. In order to achieve that, according to witness reports, various means are being used, including direct transfer of foreign-made weapons to militants, as it happened at the At-Tanf base in the south of the country,” she added.

The information revealed by the rebel defector should not be surprising, as covert and overt support for various rebels worldwide is a usual practice by the US, political commentator and journalist John Wight believes.


And it explains the nature of the US airstrikes on the Syrian government and allied forces.

“It adds an extra and murkier dimension to US airstrikes, that were conducted against pro-Syrian government forces as they approached At-Tanf back in June this year, suggesting that rather than motivated by a desire to protect so-called moderate rebels that the US was supporting at the time, they were carried out with the desire to conceal the activities that are being described by this Syrian rebel defector regarding providing arms to ISIS and other Salafist jihadi groups,” Wight told RT.

The reportedly dire conditions in the refugee camps controlled by the US-backed rebels are not surprising as well, since “the US is not really interested in welfare of the Syrian people,” Wight said.

“I can tell they have never been interested in the welfare of the Syrian people,” Wight told RT. “The Syrian people have been used as a proxy and as a justification for the US presence in Syria with its own hegemonic agenda in mind.”