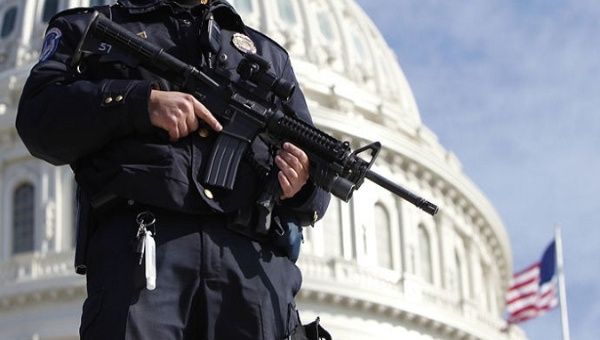 The incident occurred the around the same time a number of Black men were fatally shot by police in the United States.

“I’ve just seen way too many videos of cops —,” a woman passenger begins, explaining why she didn’t want to put her hands down and reach for her phone.

This conversation is heard in dashcam footage from July 2016, which shows a police officer in Georgia, in the United States, standing outside a vehicle during a DUI traffic stop.

The footage, having been alerted to authorities just last week, has resulted in the dismissal of officer Lt. Greg Abbott from the Cobb County police department, media reported Thursday.

The department said Wednesday that Chief Mike Register had received information late last week about the officer making “inappropriate racial comments.” During the internal investigation, he was placed on administrative duties.

Abbott’s attorney, Lance LoRusso, attempted to make an appeal absolving him of guilt for the remarks.

“His comments must be observed in their totality to understand their context,” LoRusso said in a statement Thursday to The Washington Post. “He was attempting to de-escalate a situation involving an uncooperative passenger. In context, his comments were clearly aimed at attempting to gain compliance by using the passenger’s own statements and reasoning to avoid making an arrest.”

“No matter what the context, statements like these are unacceptable and are not indicative of the type of culture we are trying to facilitate here in the police department, as well as within the county,” he said in a statement, The Washington Post reported.

For Suri Chadha Jimenez, an attorney who represented the driver in the DUI case, the officer’s comments were entirely troublesome.

“The reality is, to us minorities, there is a real fear when you’re pulled over,” he said. “He thought it was a joke, but it’s not a joke to many people.”

The incident occurred the around the same time Baton Rouge police fatally shot Alton Sterling outside a convenience store and a Minneapolis officer fatally shot Philando Castile during a traffic stop. Both incidents had sparked massive protests all over the country, with people decrying police brutality against Black people.