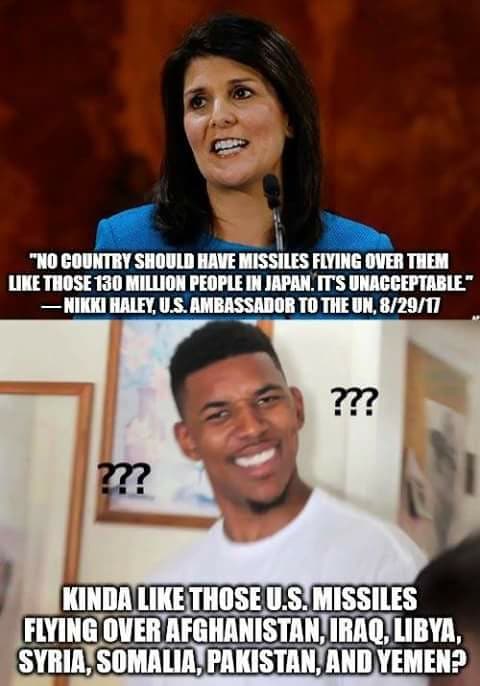 If there is one politician today who continues to struggle mightily to draw reasonable conclusions from elementary premises it is Nikki Haley. No exaggeration here. She was a proponent of the war in Syria. In fact, she conjured up “fake news” to propound the silly idea that Assad had to go.

“We have no love for Assad. We’ve made that very clear,” she said. “We think that he has been a hindrance to peace for a long time. He’s a war criminal. What he’s done to his people is nothing more than disgusting.”[1]

Nonsense notwithstanding, Haley has moved to a different territory with the same kind of mindset. “Enough is enough,” Haley said shortly after North Korea launched a ballistic missile over Japan. “No country should have missiles flying over them like those 130 million people in Japan. It’s unacceptable. I think something serious has to happen.” Like what, Mrs. Haley? Bomb North Korea?

You see, Haley isn’t acting like a rational human being precisely because she deliberately forgot her own history. Moreover, if we universalize her own statement, then she’d end up committing intellectual suicide.

If “No country should have missiles flying over them like those 130 million people in Japan,” who flew missiles in Iraq, Afghanistan, Libya, and Syria? Was it the Chinese? The Russians? Iran? Perhaps North Korea itself? How stupid can we be? Aren’t we still liquidating civilians in Iraq and Afghanistan with drones? Even the New York Times, of all places, asked last June: “Why Is the U.S. Killing So Many Civilians in Syria and Iraq?”[2] The United States-led coalition has already killed at least 4,000 civilians in those places alone![3]

Let’s again do some thought experiment here. Suppose you wake up one morning and realize that sixteen American civilians were blown apart in any major cities in the United States because of some terrorists. Wouldn’t that be all over the news? Wouldn’t the Zionist media say ad nauseam that we need to capture those terrorists and water-board until they die? And wouldn’t the media beat the average American over the head with propaganda?

Whether Nikki Haley and others like it or not, they are operating under an essentially Talmudic ideology, which has produced nothing but misery in the world.