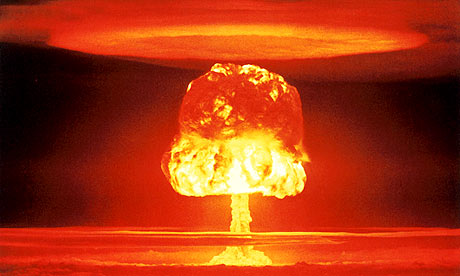 China’s Foreign Ministry issued a statement on Sunday, expressing firm opposition to and strong condemnation of a nuclear test undertaken by the Democratic People’s Republic of Korea (DPRK).

The DPRK Sunday successfully detonated an H-bomb, a hydrogen bomb that can be carried by an intercontinental ballistic missile (ICBM), DPRK’s Central Television announced. This was the sixth nuclear test the DPRK has undertaken.

“Today, the Democratic People’s Republic of Korea, despite universal opposition from the international community, conducted another nuclear test. The Chinese government expresses firm opposition to and strong condemnation of the test,” said the statement of China’s Ministry of Foreign Affairs.

China’s firm stance, as well as the common goal of the international community, is achieving denuclearization on the Korean Peninsula, protecting the nuclear non-proliferation mechanism and maintaining peace and stability in northeast Asia, the statement said.

We strongly urge the DPRK to seriously consider the steadfast will of the international community on a denuclearized Korean Peninsula and to comply with the UN Security Council resolutions, the statement said.

China urges the DPRK to cease incorrect actions that worsen tensions and run against its own interests, and return to dialogue to resolve problems, the statement said.

It said China will work with the international community to comprehensively and completely implement the relevant UN Security Council resolutions, unswervingly promote the denuclearization of the Korean Peninsula and safeguard the peace and stability of the peninsula.