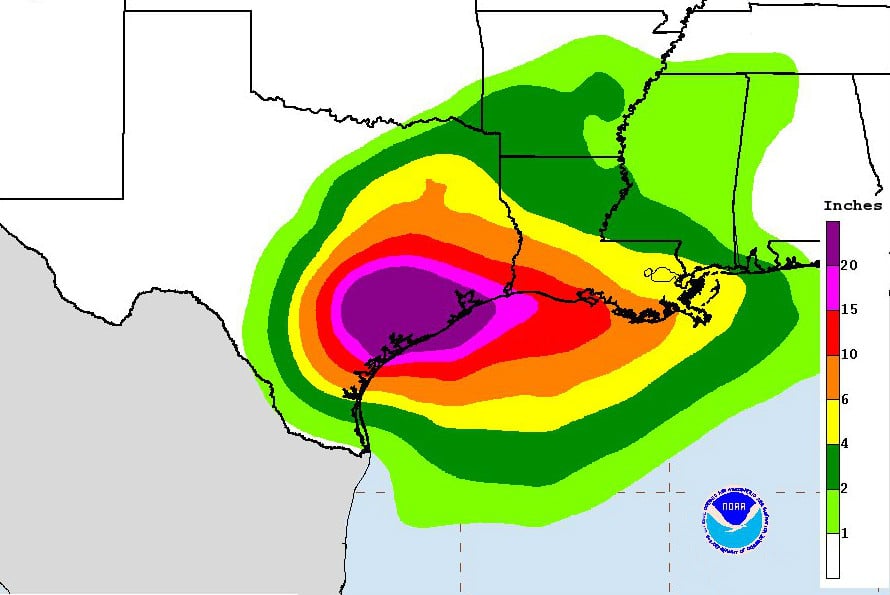 First things first: my sincerest condolences to those who have lost friends and loved ones in this disaster, to the fine city of Houston and the great State of Texas.

Good luck, too, to the Houston Police Department as they go about the vital task of shooting looters, nicely, of course. Texas isn’t the safest state in the Union because its public safety personnel are weanies.

The tragedy however could have been avoided. How do you avoid a hurricane, I hear you ask? Easy. You shut down the DVD’s storm-boosting SHEWS weapon system, the existence of which was disclosed in Spyhunter.

President Trump is most likely unaware of SHEWS’ existence, as every attempt so far to get a copy of my book to him has failed. DNI will certainly not be briefing him in, nor will CIA, indeed the intelligence has probably been kept back from Director Pompeo, who is hopelessly out of his depth. It seems that both DNI and CIA would rather sacrifice an American city than help President Trump.

The CIA of course backed Hillary Clinton in 2016 and are too busy with their absurd Russia smear and covering up their request to GCHQ, via MI6, to tap Donald Trump’s phones, to actually warn the President about major threats. Quite why anyone would expect serious intelligence to come out of a facility named the George H. Bush Intelligence Center has always puzzled me.

SHEWS stands for Scalar High Energy Weapons System. At least three ground stations, in Alaska, Norway and Russia, are able to bounce prodigious amounts of radio-magnetic energy off the ionosphere. This energy in turn can be used to boost storms or trigger earthquakes.

The ground station in Alaska is disguised as a research station, using the HAARP program as cover. No doubt some research is carried out, and no doubt some of those involved think they are involved in scientific research.

Over-emphasis on HAARP however has led in turn to a lack of emphasis on the ground stations in Norway and Russia, neither of which is under the control of the respective governments. There may be other ground stations, of course, indeed there probably are, but those are the three that I know about.

SHEWS can only trigger an earthquake in an existing fault zone, as at Christchurch, New Zealand, in 2011. It’s therefore useful in pressuring countries in the Ring of Fire. It can be used to intensify and change the direction of a storm, but not start one. You have to wait for a hurricane to come along.

INTELCOM interest in SHEWS was spiked by Katrina. Work on jamming SHEWS transmissions started after 2005. You don’t just press the tit and watch things happen – the energy build-up typically takes about 24 hours. In relation to storms continual energy input seems to be required.

Both at New Orleans and Canterbury, considerable radio interference with local cellphone networks was observed. It would be interested to know if any was observed in the Houston area. Readers in Houston are encouraged to get in touch. My only encounter with the good folk of Houston since Harvey was with a church group in London, and they were using prayer rather than cellphones.

In coming to my preliminary conclusion that SHEWS boosting was used with Harvey I have taken into account the suspicious timing, the target, alleged 1 in 500/1 in a 1,000 event probability, the storm speed and its changes of direction. These are all consistent with the weaponisation of the storm.

Of course I can’t be certain without seeing the raw data, which would confirm whether or not electro-magnetic energy in the SHEWS spectrum was beamed into Harvey. Sadly however the NSA and GCHQ are sitting on the data!

The debate over SHEWS

I am aware that not every member of INTELCOM buys into SHEWS. There is an ongoing debate, which is fine. I’m also aware that it’s esoteric area, involving high-energy physics.

I welcome debate. Intelligence analysis is a process, involving multiple inputs. The best analysis usually flows from a discussion reflecting opposing points of view. Of course in order for that to work there has to be respect for the opposing point of view.

Shouting bad faith, like Thames Valley Police and the Cabinet Office did in 2012 with the planned German nuclear attack on the London Olympics, rarely works. Very often of course the guys trying to drown out debate are doing so because they’re working for the other side.

You have to be qualified to contribute. I would be the last person to shut a moron out of a debate. If morons could not be heard in the public square how would the Democratic Party have a voice?

It doesn’t follow, of course – Professor Hawking believes in manmade global warming, after all, no offense intended. However contributions from massive intellects are usually worth listening to.

The SHEWS debate is really for physicists, major players in INTELCOM and persons of high intelligence. That’s not to say that anybody can’t join in, but if they do they should be prepared for a high standard of debate. Put shortly it’s being conducted at such a level that the coincidence theorists at the Washington Post are mere spectators.

It’s high time the SHEWS ground stations were shut down. It would be a major defeat for the DVD. However the current plan, in so far as the West has a plan at all, is to continue to sacrifice cities like Houston, in the hope that the Germans will go away. Neville Chamberlain would have approved.

New weapons systems can sound like they belong in a Clive Cussler novel. Politicians can be slow to grasp the point, General Tojo being one of the slowest. His intelligence people no doubt warned him that you guys had a new weapon, using atomic fission, which would allow a single B-29 to smash a city-sized strategic target. Tojo sat back, fat, dumb and happy. He didn’t even get it after Hiroshima and effectively decided to sacrifice Nagasaki as well. After that, it was hara-kiri time.

The Blocking of Spyhunter

Some of the people blocking Spyhunter from reaching the President are Bad Guys, just doing their job, i.e. being bad. My frustration is that some of the Good Guys are joining in.

They fall essentially into two broad categories – people who don’t have the intelligence contacts to verify what’s in the book, and people who have low-level contacts, who have been put off by adverse comments, usually made in bad faith.

The problem is that whilst those remaining few who have access to the President wait, and sit on the book, instead of letting the President make the call, the Bad Guys carry on, whacking places like Houston. In the real world people are dying and properties are getting ruined.

At the moment the DVD’s access denial program is working. President Trump and his administration are taking hits from people he’s never heard of.

Update on the book

June Press have withdrawn the Kindle edition. Sales were simply too slow. This has made the task of securing a publisher for a US edition, preferably in American English, or finding the finance for a US print run, all the more important. Alex Jones, sadly, isn’t interested in selling it via Infowars.

The Ramming of the McCain

Last week’s column got noticed! The Navy has gotten a bit quieter over the past week, as word has spread. I don’t anticipate revising my conclusions any time soon.

As I predicted, there hasn’t been a war, even a small one. Kim Jong-Un has become the most famous Kim of all, overtaking Kim Kardashian, and that’s about it. Kim is DVD (Jong-Un that is, not Kim Kardashian, who’s far too nice to be working for German intelligence) and has been reined in. He went walkabout after his silly threat against Guam, which had the effect of boosting President Trump.

The recent shot over Japan looks to have been a face-saving exercise, ditto the latest nuclear test. I predict that the Mexican stand-off will continue. Indeed, it’s the biggest Mexican stand-off since the days of Pancho Villa.

No one in officialdom is denying my conclusion that the fire was caused by TATP being stored by the ISIS bomb-making cell in the building cooking off. The Metropolitan Police are continuing to suppress the truth about the casualty figure.

Wikipedia, as one would expect from such an Axis-sympathizing publication, continues to exculpate the Japanese Empire. Wiki editors grudgingly refer to the 1937 photograph of Amelia and Fred Noonan on Jaluit but recycle the discredited Japanese claim that the photo dates from 1935.

The Wiki entry, tellingly, does not place either Amelia Earhart or Fred Noonan anywhere near Jaluit Atoll in 1935. They weren’t, indeed the Earhart-Noonan collaboration started later. There is of course no reference to my published analysis in Spyhunter or here on VT. I take that as a compliment – if Wiki could demolish my claims they would refer to them!

Despite the desperate efforts of individuals and organisations supportive of Japanese militarism to let the Japs off the hook over the shoot-down and subsequent brutal execution of Amelia Earhart and Fred Noonan, the truth is now out.

Wikipedia are a disgrace. There’s little point anyone trying to edit the entry on Amelia Earhart to introduce balance. The edits would be reversed swiftly and any editor seeking to print the truth banned. Our community partner Dr Goebbels would have approved!

If you want to be a Wiki editor I suggest you change your name to Goebbels.