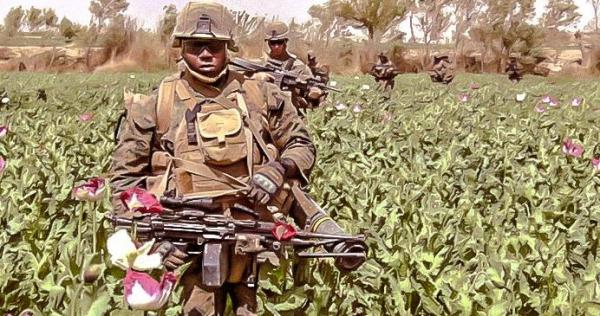 __________
IRNA
Fighting drugs, the most forgotten in new US Afghan strategy

Despite the presence of thousands of foreign troops in Afghanistan to secure the country and bring peace and development for Afghans, it has changed into the world’s main producer of opium.

By November 2001, the collapse of the economy and the scarcity of other sources of revenue forced many of the country’s farmers to resort to growing opium for export.

According to a data released by US departments in media almost 60,000 US citizens died from drugs in the year 2016 most of which comes from Afghanistan.

The US government in last 16 years has spent more than seven billion dollars on stopping heroin from Afghanistan whereas more than 5 billion US dollars every year are earned by mostly the Taliban in Afghanistan from this illicit and deadly drug.

According to the EU agencies, Afghanistan has been Europe’s main heroin supplier for more than 10 years.

Experts believe that the fight against Taliban can never be won unless the heroin producing crop, poppy is not eliminated in Afghanistan. It is financial capability which empowers Taliban to buy sophisticated weapons each year.

Some countries want to have more trade with Afghanistan to help their economy, but they are afraid of drugs which means during tracking is a hurdle for boosting Afghan trade.

Assisted by some other countries, Afghanistan has been trying to fight opium cultivation, including eradicating the crop before harvesting, but the efforts have so far achieved success.

Till this date not a single big drug dealer has been arrested in Afghanistan on charges of Heroin smuggling.

Fierce fighting in poppy-growing regions shows the Taliban’s determination to protect their trafficking routes and from government forces under orders to eradicate the crop.

While announcing his new strategy for Afghanistan and South Asia, US President Donald Trump had said that more troops would be sent to Afghanistan for bringing peace in Afghanistan, but he failed to reveal any mechanism to deal with the poppy cultivation and drug trafficking in the country which is a threat not only for the US, but the whole world.

The increase in poppy cultivation under US presence in Afghanistan has become a serious concern. It may be correct to say that presence of the US in Afghanistan is adding fuel to the afghan problem and the example of increasing poppy production is clear example of that.

If the US is sincere in its claims to bring peace and stability in Afghanistan, the most useful thing it can do, is leaving the poor country immediately and let Afghan people and other regional countries to find a peaceful solution to issue of Afghanistan.