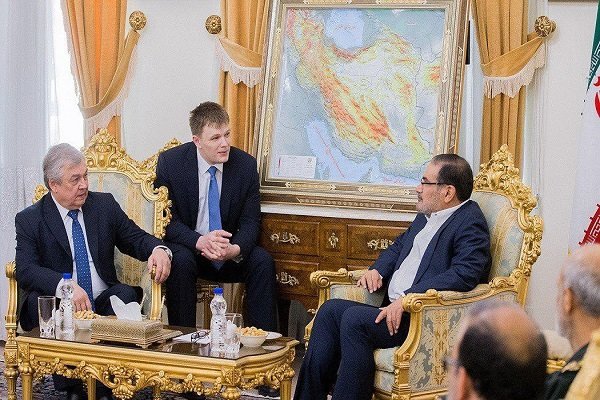 The remarks by Shamkhani came as the Syrian army after three years succeeded to break a Daesh siege on the eastern town of Deir Ezzor.

Shamkhani went on to say that it is essential that all countries and political groups to respect Syria’s national sovereignty.

“All sides’ commitment to an inter-Syrian solution and respect for the people’s right to determine their destiny without any foreign interference will lay the ground to facilitate finding a way out of the crisis in the country,” the security official noted.

Shamkhani also said that Iran prioritizes eradication of terrorism in the region, adding Iran’s help in fighting terrorists is based on good intention and upon a request by the Syrian people and their legitimate government.

Elsewhere, he described terrorism as a “lethal virus” that entails “coordinated” and “joint” campaign to fight it.

Lavrentiev highlighted the importance of settling the Syrian crisis through dialogue between the government and opposition groups.

Jaberi Ansari has been leading the Iranian team in the Astana talks on Syria which were brokered earlier this year by Tehran, Moscow and Ankara.

On Tuesday, Shamkhani also congratulated Ali Mamlouk, the Syrian security chief, for the success of the Syrian Army in breaking Daesh siege on Deir Ezzor.

“Consecutive victories in fight against Takfiri terrorism in Iraq and Syria and liberation of important and strategic regions heralds a bright future and security and stability in the region,” Shamkhani said in a message to Mamlouk on Tuesday.

The liberation of Aleppo, Deir er-Zor, and the Iraqi cities of Mosul and Tal Afar will result in the end of Daesh, Shamkhani predicted.

“Real, active and close cooperation among Syria, Iraq, Iran and Russia along with Lebanon’s Hezbollah has resulted in achievements in fight against terrorism and has foiled foreign plots… aimed at undermining stability in the region,” the top security official noted.

He also said Iran will help the Syrian people in reconstructing their country.