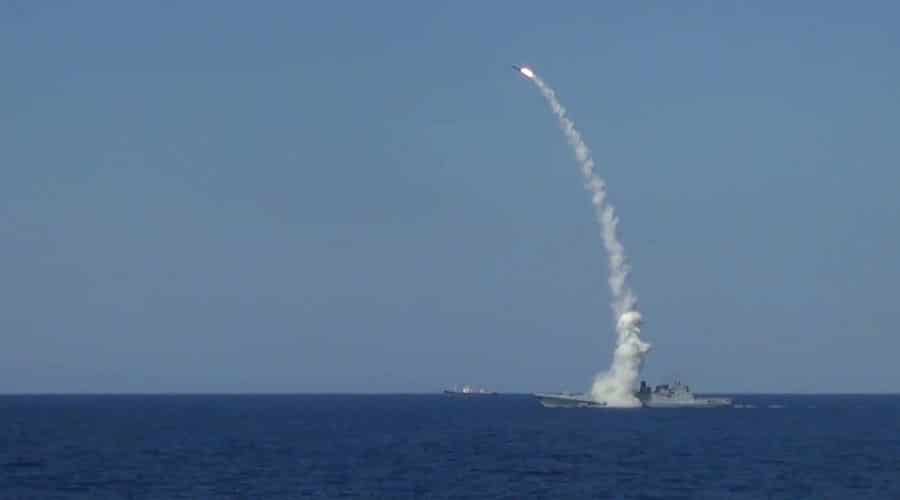 Russia Today: A Russian warship in the Mediterranean Sea has fired a salvo of Kalibr cruise missiles at a group of jihadists stationed near the city of Deir ez-Zor in western Syria, the Russian military reported. The targeted militants were mainly from Russia and countries of the CIS.

The frigate ‘Admiral Essen’ of the Russian Black Sea fleet fired the missiles on Tuesday morning, a statement by the Russian Defense Ministry said. The barrage destroyed a communications center, weapons depots and a repair workshop used by Islamic State (IS, formerly ISIS/ISIL) militants, it said.

“The missile strikes supported the advance of Syrian government forces, and have foiled the plans of the ISIL militants to regroup and strengthen terrorist positions near the city of Deir ez-Zor,” the ministry said.Damascus forces supported by Russian warplanes are currently trying to lift a years-long blockade of the provincial capital Deir ez-Zor. Moscow says that the success of the operation would amount to a strategic defeat of the terrorist group in Syria.

Deir ez-Zor: Why city’s liberation is so important to crush ISIS

Earlier on Tuesday the importance of the campaign in Deir ez-Zor governorate was stressed by Russian President Vladimir Putin, who is currently in China at the BRICS summit.

“The situation [in Syria] is changing dramatically, and that is an obvious fact. I hope that our partners will follow through with their effort in Raqqa. And Deir ez-Zor is a strategic military stronghold for the entire radical opposition – radical in the worst sense of the word, the ISIS-affiliated opposition.”

“As soon as the operation in Deir ez-Zor is finished, the terrorists will suffer a very serious defeat and the government forces will get an obvious advantage. Then the next step would be to foster the ceasefire and the de-escalation zones and to fully establish the political process,” he added.

The ‘Admiral Essen’ is one of Russia’s most modern warships, the second of the Admiral Grigorovich class to set sail. It carries 8 vertically-launched Kalibr cruise missiles and previously fired them at IS forces in May and June.