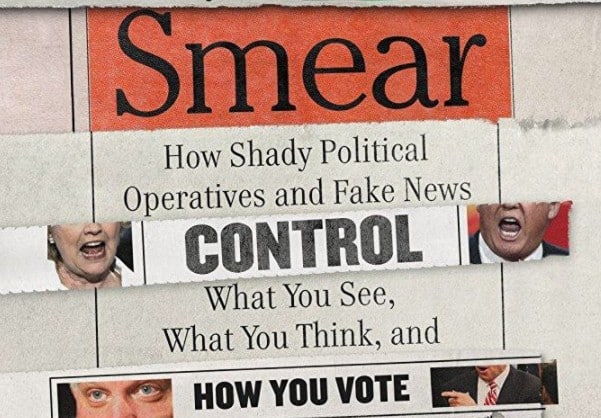 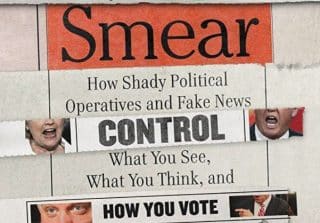 It’s grown from “one of the largest white-collar industries in Washington DC” to being a truly global phenomenon. In her must-read new book, The Smear, the five-times Emmy Award winner and former CBS investigative reporter, Sharyl Attkisson, reveals how smearing people has become a huge, multi-billion dollar industry.

Sharyl Attkisson details, in meticulous fashion, how those in power — modeling their work on propaganda techniques developed by the late Dr. Joseph Goebbels — create well-funded attack campaigns to destroy the reputations of their enemies, and to influence public opinion to their advantage.

The repetition of a smear is essential to its success.

Just finishing “The Smear” by @SharylAttkisson. Must read. There’s nothing you can trust in political news coverage. It’s all stage managed. pic.twitter.com/7AJTbaHReO

“An attempt to convince must confine itself to a few points and repeat them OVER AND OVER. Focus and repeat — until the audience recites it in their sleep. Pretty soon they’ll have no choice but to believe it.”

The phrase, “Iraq’s Weapons of Mass Destruction,” robotically repeated by neo-con commentators in the lead up to the invasion of Iraq in 2003, springs readily to mind. 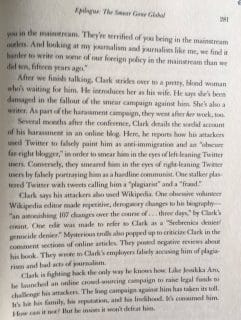 ‘The Birth of the Modern Smear’

In chapter one, “The Birth of the Modern Smear,” Attkisson notes how the CIA was responsible — fifty years ago — for promoting the phrase “conspiracy theory,” “for use as a powerful device in the lexicon of the smear artist.”

The CIA internal memo of April 1967 goes on to advise station chiefs to “employ propaganda assets” — adding that “book reviews and feature articles are particularly appropriate for this purpose.” In 1977, Carl Bernstein revealed that over 400 American journalists had secretly carried out assignments for the CIA in the previous 25 years.

Which begs the question: How many journalists, are working for it — and other allied intelligence agencies today — pushing the Deep State line on foreign policy and seeking to marginalize those who dare to challenge?

Attkisson says that while there were plenty of smears in the 1960s and 70s, the organized political smear “entered the contemporary marketplace” in 1987, when President Reagan nominated a conservative judge, Robert Bork, to the Supreme Court.

The campaign to stop Bork led to a new verb being coined. “‘Getting borked’ came to mean becoming the unfortunate target of an unfair, relentless, organized character assassination,” Attkisson explains.

Since the eighties countless people have been “borked” — from left and right.

That’s the operatives’ strategy. Attkisson describes how smear merchants, working for government agencies, PR firms, “think-tanks,” Super PACs, media conglomerates, or other lobby groups, monitor their target’s work round the clock — waiting for the one little mistake that they think they can destroy them.

It could be re-tweeting an individual or a website designated as “Off Limits” by Establishment gatekeepers. Or making a verbal slip in a television or radio interview.

The important thing — from the smear artist’s perspective is to amplify the “misdeed” out of all proportion. To manufacture a sense of “outrage.”

Advertisers are urged to pull commercials. Pressure is put on the person’s employer to fire them. We’ve all seen this happen. But how many people realize the vast amounts of money that go in to these operations?

She describes astroturfing as the cousin of the smear.

“It’s a vehicle that allows the smear industry to conduct some of its most influential work in complete disguise. The idea is to keep the public from ever knowing exactly who is behind a particular effort to sway opinion.”

Going through @SharylAttkisson new book The Smear!! Straight fire!! 🔥🔥🔥🔥 confirming so much I suspected about how modern media operates pic.twitter.com/IWp9cKG6GL

Multiple, fake online personas are used to try and convince people that an opinion has much more support that it actually does — and to attack opponents.

It’s not just governments that do this, it’s corporations and private interest groups too.

In Chapter Six, “Transactional Journalism: The Black Market Information Trade,” Attkisson explains how the government exploits its cosy relationship with Establishment-friendly media to destroy a target.

As if by magic, hatchet pieces on him appeared in the press. “At one point during the scandal, someone inside the government trying to destroy Dodson leaked to the press a highly sensitive document about his undercover work at ATF (The Federal Bureau of Alcohol, Tobacco, Firearms and Explosives) — and the press published it.”

Attkisson herself became a target for investigating the story.

“Forensic experts identified unauthorized remote intrusions into my personal and CBS work computers,” she says. “They were able to see that the intruders had viewed my Fast and Furious-related documents. Someone had even planted classified documents on my CBS laptop.”

The last third of her book details how the 2016 US presidential campaign — and its aftermath —  was totally dominated by smear campaigns.

“No serious person out there who (sic) would suggest somehow that you could even rig America’s elections’ declared President Obama in August. But when Trump beat Clinton, the smear that The Donald had been put in the White House by ‘Official Enemy’ Vladimir Putin reached fever pitch,” Attkisson says.

“Many in the news media treat it as a proven fact rather than an allegation of theory, although the public evidence is lacking,” she writes in the section entitled ‘Russia, Russia, Russia!”

In truly Orwellian fashion,  a campaign against “fake news” was launched in the US and UK, by those who themselves are at the forefront of promoting fake news.

It became de rigueur for smear merchants to refer to media that does challenge Establishment narratives — like Sputnik or RT, or alternative left-wing sites such as The Canary, Evolve Politics or The Skwawkbox, as “fake news outlets.”

Wikipedia is another forum mentioned by Attkisson  where smear merchants work tirelessly to harm reputations.

Anyone can edit, so it’s the easiest thing in the world for paid-operatives to maliciously edit the pages of political opponents, by bigging up “criticism” of the subject and keeping off praise or positive citations. Attkisson gives the example of the hostile editing of the page of the Pulitzer Prize winning journalist Jeff Gerth.

She also in a later chapter mentions the editing of my Wikipedia page — which I discuss in detail here.

In fact, reading The Smear, helped me make better sense of the vicious and unrelenting campaign waged against me — and my wife — for eleven years, (which began straight after I had critically reviewed a pro-war book by an Iraq-war supporting neocon for the Daily Telegraph), and which Attkisson covers in the epilogue of her book, entitled “The Smear Gone Global.”

Once one understands the pattern to these campaigns, and the language that is invariably used in them in order to discredit targets — (“conspiracy theorist,” “fraud,” “fake,” “racist,” “sexist,” “far-left,” “far-right,” a “denier” of this, that and the other), it’s much easier to make sense of what’s going on.

One of the smears regularly used against me by my stalker and serial defamer was that I was a “Srebrenica denier,” which I most certainly am not. Years later, I learnt — from leaked minutes of the inaugural UK meeting of the pro-war Henry Jackson Society — that the same person who had regularly targeted me, a hedge-fund manager and blogger called Oliver Kamm, had been tasked with getting into circulation the smear that the antiwar academic Noam Chomsky was a Srebrenica denier.

I am currently bringing a legal action against Kamm and his employers for what they put me through — you can, if you wish, contribute to my crowd-fund here. All contributions, large or small, are very gratefully received.

‘Nothing Happens by Accident’

You’ll be able to identify a smear artist by the language they use and the techniques they deploy. Character assassins are poisonous, but now, at least, with the publication of The Smear, we have an antidote to their poison.

“One thing you can count on is that most every image that crosses your path has been put there for a reason. Nothing happens by&nnbsp;accident. What you need to ask yourself isn’t so much, ‘Is it true,’ but ‘Who wants me to believe it — and why?’ “

The Smear, by Sharyll Attkisson, is published by Harper Collins