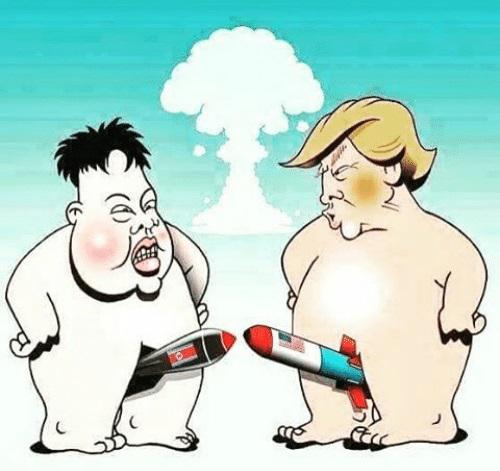 Despite prior piss-contesting behavior recognized by many (e.g., Germany‘s Biggest Magazine Just Humiliated an Insecure Trump for His North Korean Pissing Contest“), U.S. President Donald J. Trump and North Korean leader Kim Jong-Un can still avoid a good, bad & ugly Mexican Standoff on intercontinental nuclear issues by doing a long-sought deal: End the Korean War (1950 to 1953, when only an Armistice was signed). 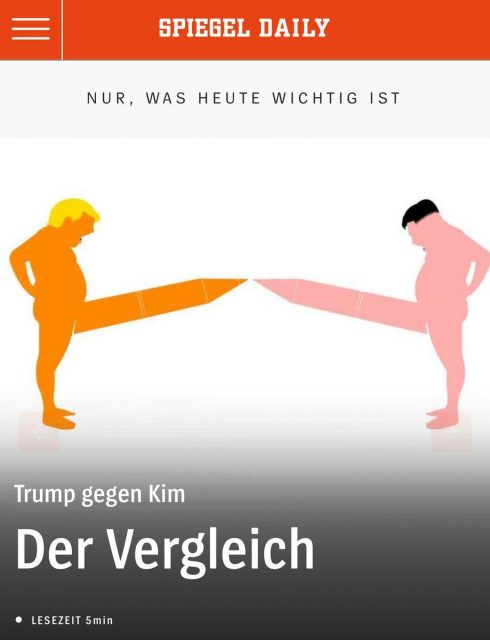 “Trump gegen Kim: Der Vergliech” is German for “Trump versus Kim: The Comparison.”

Most recognize that the Trump-Kim puerile Pissing Contest can unnecessarily lead to World War 3.

What works for Americans, North & South Koreans and most others is for Trump and the U.S. to do a deal with Kim and North Korea that works for “many sides, many sides” (a good thing, this time). Trump may or may not be too much of an incompetent, globally-disliked, increasingly-less-powerful, narcissistic Tweeter-In-Chief to do the right stuff. However, totalitarian-tending Trump has already definitively answered the call: “We’ll see.”
Background

Tuesday, U.S. National Intelligence ex-Director James Clapper said that North Korea and Kim Jong-Un are not seeking war (contradicting Trump and UN Ambassador Nikki Haley). As if they matter in Trump’s post-fact world, Clapper laid out historical facts and logic for pursuit of nukes and ICBMs by Kim and North Korea.

As favored by General Douglas MacArthur, U.S./UN commander during the Korean war, U.S. came close to using nukes against North Korea. The U.S. and UN tried to wipe North Korea off the face of the map literally. More than two (2) million Koreans, Chinese and UN-allied troops dead and wounded during the Korean War (with +/-35,000 dead American soldiers).

Even if Trump and U.S. allies can ‘win’ any Korean War continuation, literally millions of South & North Koreans would die. Since Kim and North Korea have credibly targeted Seoul and U.S. military bases in South Korea (home to +/-30,000 U.S. troops) with thousands of non-nuclear, conventional missiles, most of Seoul and much of South Korea would no longer exist. Since Trump and the U.S. can easily do a deal with Kim and North Korea, should Congress and we let Trump do a big war? If Trump loses a pissing contest with Kim, so what? 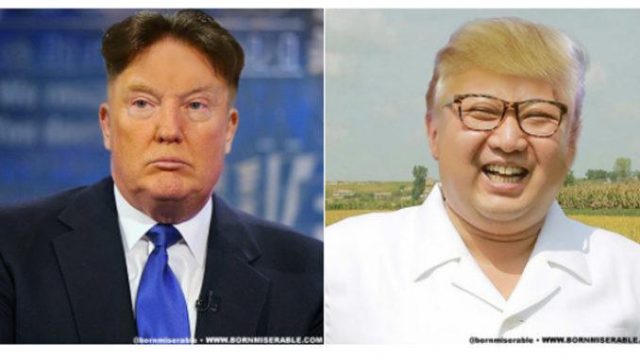 Trump and Kim transformations during final negotiations for a Korean War Peace Treaty?

Chinese President Xi Jinping and Russian President Vladimir Putin do not appear to be as concerned about the Trump-Kim Mexican Standoff as other world leaders appear to be. China and Russia aslo do not favor additional UN sanctions.

To emphasize this tragic-comedic Mexican Standoff, one of Trump’s proposed solutions was to kill the U.S. economy and dump the body on Kim’s head. Trump seriously proposed cutting all trade with China (which would kill the U.S. economy) to motivate China to do the right stuff with Kim & North Korea. Sad, Very Sad. Even U.S. Vice President Mike Pence hung his head. Neither Americans nor others around the world trust Trump to do the right thing.

For several reasons, China is the most probable source for North Korea’s weapons tech not necessarily for reasons that most might think. As previously detailed in VT, the West hit Tianjin in China with a mini-nuke weapon in 2015. Understandably, China was pissed. For China, a pissing contest is a dish best served cold… 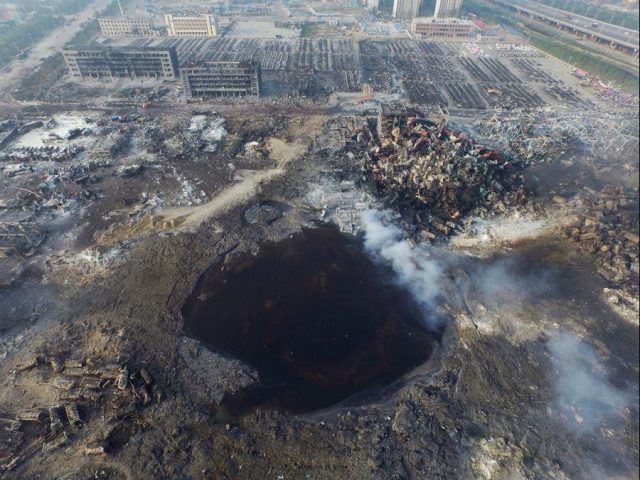 Even after the demise of Western/Rothschild-backed Chinese leader Mao Zedong, Maoists still control significant portions of the Chinese military. Much to the open chagrin of the U.S. and others, Rothschild-created Israel supplied U.S. weapons tech to China.

Rothschild-style banking and monetary systems are in serious global jeopardy. Other than surrendering to debt-free currencies in a world of abundant labor, resources and energy, only a big war can delay the impending implosion of Western economic, monetary and banking systems. Trump appears ready to oblige. 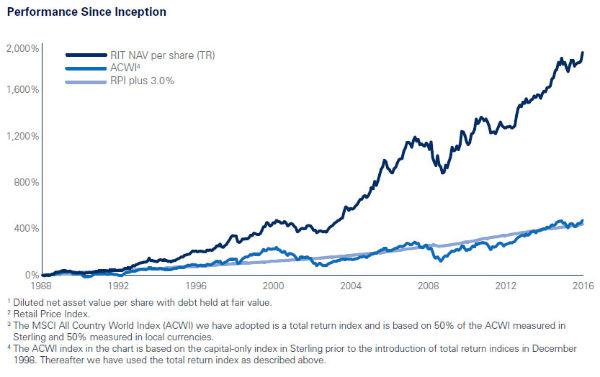 A graphic from “Jacob Rothschild Dumps US Stock,

n 2014, an unarmed Russian Su-24 military jet ‘neutralized’ all weapons and electronic systems on the Aegis-class U.S.S. Cook in the Black Sea. Subsequently, Russia deployed sophisticated defensive electro-magneto-gravitic A2/AD in Syria that U.S. and others could not counter, as per public statements by the U.S. military. This year, China, Russia and/or others appear to have ‘neutralized’ two Aegis-class U.S. warships, USS Fitzgerald near Japan and USS John McCain near China, which resulted in fatal collisions with civilian cargo ships. Thus, China’s threat to neutralize U.S. military threats to North Korea are credible. 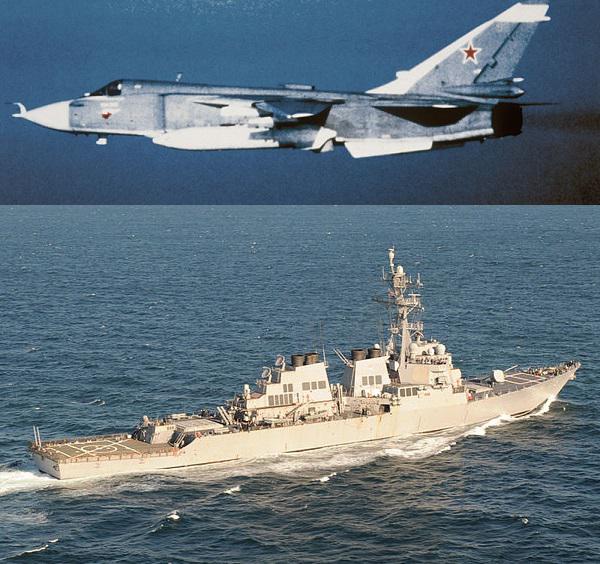 End the Korean War. The U.S., North Korea, South Korea, Russia, China and necessary others can easily meet to negotiate and sign a peace treaty. No more war and war games against North Korea. End sanctions, which hurt North Korean civilians more so than they hurt Kim and North Korean military leaders. Normalize diplomatic and trade relations. Stop targeting the Kim family for regime change. Let the people of North Korea and South Korea decide who their leaders will be. Help North Korea to develop its infrastructure and human & other resources for peaceful purposes.

In exchange, Kim and North Korea would need to forego or delay certain types of ICBM and nuclear weapons testing. Let the diplomatic and military negotiators of the affected countries decide what would need to be included in any North Korean forbearance agreement that becomes part of the Korean War Peace Treaty.

Help us, Obi-Won Donni Trump, you’re our only hope! Sad. 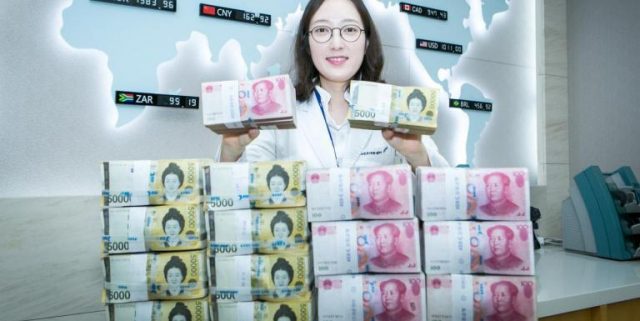 Above, Korean Won & Chinese Yuan. A principal factor in unifying East & West Germany was a 1-to-1 conversion rate for East & West Deutsche Marks. A debt-free currency might achieve such a result for North & South Korea. China may soon issue a gold-backed Yuan, a unit of the Renminbi Chinese currency.