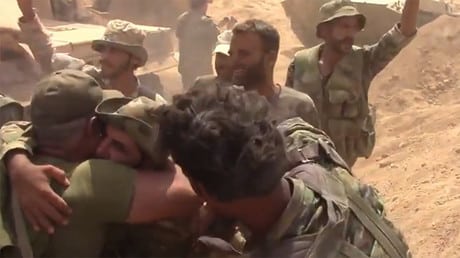 Russia Today: Syrian forces have captured the fortified area near Deir ez-Zor that was struck by Russian cruise missiles, which Moscow says killed over 200 jihadists. Troves of weapons, explosives and damaged armored vehicles were found on the site where the terrorists had holed up.

As the Syrian troops were clearing out the area, they discovered a massive network of underground tunnels used by terrorists to stock weapons, ammunition and as living quarters. Large caches of weapons, as well as considerable food and medicine supplies left by the fleeing terrorists, indicate that they were preparing for a long-term defense of their positions, the Russian Defense Ministry said in a statement Wednesday.

During the raid, the Syrian forces found evidence that the militants holing up in the area hail from Russia and former Soviet republics, the ministry said, adding that the data confirms its own previous intelligence that drew on various sources.

Over 200 militants were killed after Russian Kalibr cruise missiles hit the area on September 5, dealing a heavy blow to the jihadists’ military capability and destroying “12 armored vehicles, including four tanks, six artillery and mortar firing positions, a command post and a communication center, as well as three ammo depots,” the ministry said.

In addition to this, a car repair shop, used by the jihadists to mount anti-aircraft weapons, fit heavy machine guns onto vehicles and plant bombs, was also obliterated.

Footage of the strike’s aftermath released by the Russian Defense Ministry shows the remnants of the heavily fortified terrorist base, which was once ready to withstand all-round firing thanks to its interconnected firing positions.

Traces of terrorists living in the hideout can be clearly seen if you delve inside the intricate web of tunnels. Armaments scattered on the floor, a pile of religious books, ramshackle furniture, an electric bulb hanging from the ceiling – now all abandoned, indicate that jihadists have been living there for a while.

The missile strike launched from the Russian frigate in the Mediterranean Sea was key to the breaking of the three-year siege of the city of Deir ez-Zor. The attack prevented the terrorists from regrouping and mounting a counter-offensive on the Syrian army, which has been making rapid advances in the province of the same name, still mostly under Islamic State (IS, formerly ISIS/ISIL) control.