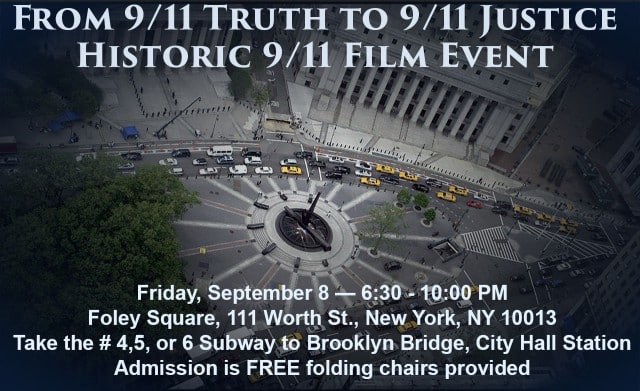 The Lawyers Committee for 9/11 Inquiry will soon be filing an official petition with the US Attorney of the Southern District of New York calling for a new investigation into the events of 9/11 in general and the explosive destruction of the World Trade Center in particular. The official announcement will come tomorrow, Friday, at the From 9/11 Truth to 9/11 Justice event in Lower Manhattan, just a few blocks from Ground Zero. This event will have as its spectacular backdrop the New York Supreme Court building (see photo above).

The pre-planned wars triggered by the 9/11 false flag operation have killed at least 32 million people and cost the US economy around 7 trillion dollars, according to Dr. Gideon Polya, an expert in avoidable mortality.

Listen to Dr. Gideon Polya present his conclusions on my radio show

Along with losing its Constitution, moral authority, and credibility due to 9/11 and the 9/11 wars, the USA has led the world in squandering attention and resources that should have been devoted to building sustainable planetary infrastructure. In short – as David Ray Griffin points out in his new book – by allowing/orchestrating 9/11, Bush and Cheney ruined the world.

Barbara Honegger points out that info-activism on social media is not the only option available for people who want to help solve this problem. The 9/11 Truth Action Project (911TAP.org) offers several ways to get involved. And if you want to help push legal action for 9/11 truth and justice “you don’t have to be an attorney – people should apply to be a member or associate member of the Lawyers Committee for 9/11 Inquiry.”

There are numerous 9/11 truth movement events happening around the USA in connection with the 16th anniversary of the false flag atrocity that ruined America and the world. For details click HERE and/or listen to my new interview with Barbara Honegger.

Hope to see you in person at the 9/11 Truth Film Festival this Monday, September 11th, at the Grand Lake Theater in Oakland, California.