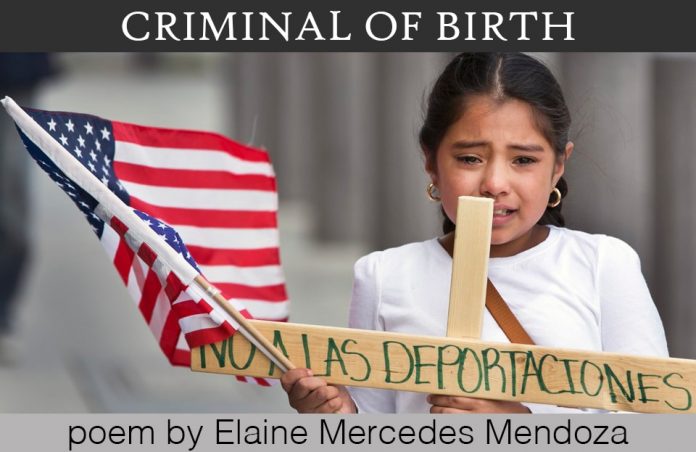 I am a criminal of birth.

My sentence is indefinite.

when I was only a child

and since then I’ve managed

to keep my “American” spirit alive.

brainwashed all these years.

After the initial shock I did see stars.

True colors are starting to appear.

and white isn’t the color of your lies

but I assure you the bruises on my spirit

are of the deepest ocean blue,

will you do for me as I have done for you?

It all started way back “then.”

I was taught that I was

“In the land of the free

and the land of the brave.”

I even recited the morning speech,

” A pledge of allegiance

to the flag, of the United States of America.”

Now these words run mockingly through my head

now I’m no longer “American” I’m a criminal instead.

Now I’m a criminal without a name

because an A# has taken its place.

Thomas Jefferson wrote that “All Men are created equal,

that they are endowed by their Creator with certain unalienable Rights,

that among these are Life, Liberty, and the Pursuit of Happiness.”

But now Jefferson is probably not resting in his grave,

but you could say I’m feeling like a modern day slave.

I’m being “traded back” for free

cause the flight of deportation has no charge.

I have no Lincoln to save my day.

but how can I fight against my own patriotism?

Today the statue of liberty is just as large

but now I’m scared of its monstrous sight.

when before all I saw was its beautiful light.

My work permit has been denied.

Many of “us” cannot even obtain a license to drive.

The “American dream” is a “nightmare” for those not born here

who remain blind to all of its crimes.

and am talking to hopefully make this issue “aware”

People pay “less” for me cause my skills have less “worth.”

I am a criminal and now I must do “time”

but someone please tell me

what was my crime?

But now I should not travel.

Again I pay the price for something I did not do.

I’m an “American citizen” that does not exist.

Drug dealers have better luck than mine.

The USA adjusts their status quickly

while I have to wait in line.

Their “business accounts” buys them a green card

while my time and life here are of no value

I must defend myself now while they just want to argue.

Apparently my time here is up.

I already spent all that I could growing up here

and now my “American hope” has been replaced by fears.

so now America tells me “Get out of here this isn’t your flag.”

I must come forward even though you say I have no rights.

I still have a voice although I cannot appeal.

today it is clear to me that all of this is real.

I’m in an abusive relationship with the United States.

To remain here I must be like the “average citizen”.

I’d be so lucky to be granted the right to stay.

You can stay as an artist,

if you have an Oscar and Grammy on your night table

The US President or the “master” might welcome you “later.”

This is the “silent” World War III.

My identity is tarnished and very confused.

I feel like a soldier for the United States,

boasting stars and medals to show my “pride”

but my comrades are shooting at me,

have I been defending nothing but lies?

Why should I be a criminal of birth,

when I didn’t have a choice?

Now you’re threatening to deport me like a mother giving away her child,

but I wasn’t raised to be abandoned into the wild.

This war cannot go on forever.

My “American” spirit has been killed.

I’m being severely punished all in the name of justice and free will.

Oh America, how I cry for you today.

After growing up “American” and learning everything I know

I’m now questioning was it all true?

whatever happened to the land of the free?

My marriage to your US citizen did not work out.

Now I’m the one on trial.

I’m sick and tired of defending my case.

The laws tease me and I’m being treated with hate.

You’ve cashed in on my expensive INS applications

but I’ve gotten nothing but years of rejection.

I get a letter without even the courtesy of an explanation.

But to the republic for which it stands. one nation, under God,

Everyone else has no worth.

What a tough lesson I’ve spent my whole life trying to learn.

A citizen of nowhere on planet earth.

I realize I’m just a criminal,

a criminal of birth.

I’m a creative soul with a strong desire to help others through my travel experiences. I quit a six figure income job in 2015 to travel the world and tell you about it. Most importantly, I can teach you how you can do it too.  Life is too short. Make the most of it. We all have pain, joy, and the common thread LOVE. Traveling is not about having a lot of money, it is about knowing HOW to make it happen.