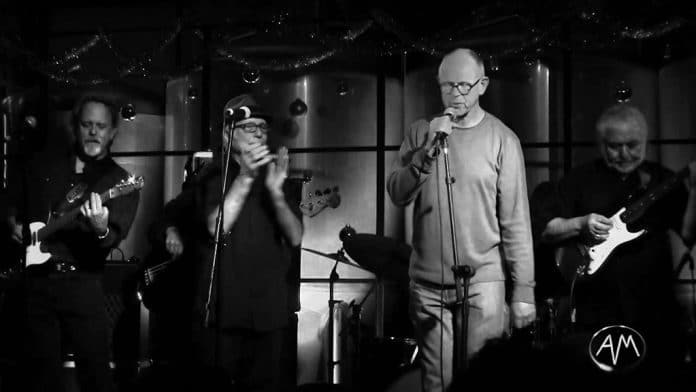 Thorne Dreyer’s guests are artist, comedian, and musician Kerry Awn telling stories and performing with the Uranium Savages, the historic Austin band, formed in 1974, that mixes in satirical and slapstick performance art with its rock ‘n roll.

Kerry and the band perform several songs live and tell great stories about the early days of the Savages (more than one involving the police!) and the Austin music scene in the ’70s and beyond.

Kerry Awn is a painter and muralist whose cartoon art was featured prominently in ’60s underground newspapers The Rag and Space City! and who was a poster artist for Armadillo World Headquarters and other prominent music venues. Kerry was a featured performer with the famed sketch comedy group, Esther’s Follies, and was a stand-up comic who was named the Funniest Person in Austin. His mural, “Austintatious,” on the UT drag, is an important part of Austin history. Kerry was elected to the Austin Arts Hall of Fame.

Kerry is the leader of the wild and crazy comedic rock ‘n roll band, the Uranium Savages. Founded in 1974, the Savages have been keeping Austin weird ever since. They call themselves a “comedy, rock, punk, cosmic cowboy band,” and claim they are “the band too dumb to die.” The Savages’ new CD is called Clown Juice and it was produced by Shawn Sahm.
[powerpress_playlist]