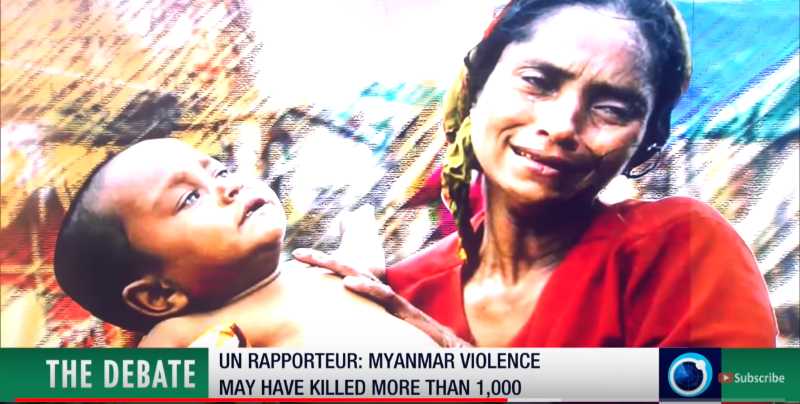 [ Note: The Rohingyas are getting “the treatment” from the Myanmar military. International press is reporting that insurgents are reported to have attacked several police posts and an army base – a crazy thing to do if the reports are true, as we see what the sad result was.

And even if some young hotheads did such a stupid act, unleashing military troops upon unarmed village populations with fire and brimstone is hardly a justifiable reaction. The claimed number of dead has the profile of retribution attacks on the villages of the alleged insurgents.

In Myanmar these Rohingya “crackdowns” have historically been done with impunity. The scale of this one, the media blackout from the government side, and its going so far as to even block UN aid from going to desperate people indicates this is not a spontaneous event, but a planned one.

Somebody wanted to crank up another destabilization show. We don’t know who for sure, but we know that Syrian War refugee camps in Turkey and Jordan were recruited for opposition fighters, even trained by the US, and where many went over to the jihadis when they crossed back into Syria.

As to the question “why now”, with ISIS in the last stages of being beaten in Syria, the major contender would be someone maybe wanting to open a new terror front in Asia. Atrocities on an ethnic and religious minority would be a logical trigger. Such things are usually done by a major Intel agency, or several working together. Israel is a major arms supplier for the regime, and “other services” are often packaged with Israeli arms deals.

“Iceberg of misinformation” by “terrorists”; that’s Aung San Suu Kyi’s take on her country’s persecution of Rohingya. While people worldwide are protesting the carnage, govts have been slow to react. Israel says its arms sale to the Myanmarese junta is a ‘diplomatic matter’ & will proceed.

Norway’s Nobel committee, too, says it will not rescind Suu Kyi’s Peace Prize. To add to that, Canada has not said whether it will cancel her honorary Canadian citizenship. Join me, Waqar Rizvi, as we discuss reactions to Myanmar’s Rohingya crisis.