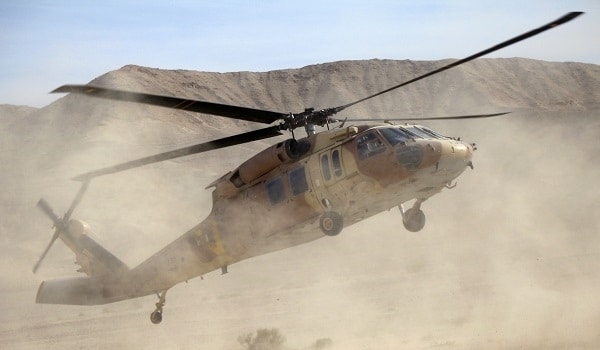 TEHRAN (FNA)- Military helicopters of the US-led coalition carried out another heliborne operation in Southeastern Deir Ezzur, carrying 20 senior ISIL commanders on board, a military and diplomatic source said on Friday.

“Amid the successful operations by the Syrian government troops in the Eastern part of Syria in late August, a number of ISIL field commanders backed by US special services, had been promptly evacuated from Deir Ezzur to safer regions in order to use their experience in other directions,” the source said.

The source said that the first such extraction took place on August 26, a “US Air Force helicopter” evacuated 2 European field commanders of ISIL with members of their families from a region Northwest of Deir Ezzur at night.

According to his data, two days later, US choppers transferred 20 ISIL field commanders and militants close to them from a region Southeast of Deir Ezzur city to Northern Syria.

“Militants who lost their commanders due to the Americans, usually tend to cease organized actions, leave their positions, join other (ISIL) units or flee one by one. This eventually contributes to the success of the offensive by the Syrian government troops in Eastern Syria,” the source said.

Military sources confirmed on Tuesday that the Syrian Army troops entered the 137th Artillery Brigade Base in the Western outskirts of Deir Ezzur city, lifting the ISIL terrorists’ siege of the city after approximately 1,100 days.

The army soldiers, backed up by the country’s Air Force and Russian fighter jets, prevailed over the last strongholds of ISIL in the Western outskirts of Deir Ezzur city and reached positions of their comrades in the 137th Artillery Brigade Base, the sources said, adding that ISIL’s siege of Deir Ezzur city was ended after more than three years.

The sources added that a number of the army forces and military vehicles entered the 137th Artillery Brigade Base via a newly-set corridor minutes ago.

The next phase of the Deir Ezzur military operation will include lifting the siege of the military airport in the Southern outskirts of the city, followed by taking control of the entire provincial capital.

Recapturing Deir Ezzur is of great importance for the fight against ISIL due to its strategic location. It is the largest city in Eastern Syria and the seventh-largest city in the whole country.

Deir Ezzur and the surrounding governorate of the same name are located on the Syrian border with Iraq, so, if captured by the Syrian governmental forces, they will leave ISIL militants effectively trapped in the heart of Syria in their only remaining stronghold of Raqqa.

Liberating the city would also give the government forces strategic advantage over the terrorists as it will provide Syrian armed forces and their allies with a really stable foothold in this part of Eastern Syria.

Apart from its strategic importance for the military defeat of ISIL, ending the siege of Deir Ezzur would also have a significant economic effect and would be a great relief for thousands of people currently trapped in the city surrounded by the terrorists.

Deir Ezzur is the capital of an oil-rich Eastern Syrian province and the center of the Syrian oil industry that once served as a source of wealth to ISIL as it captured the area and besieged the city. Depriving terrorists of these resources would be another significant blow to the ISIL Takfiri group.