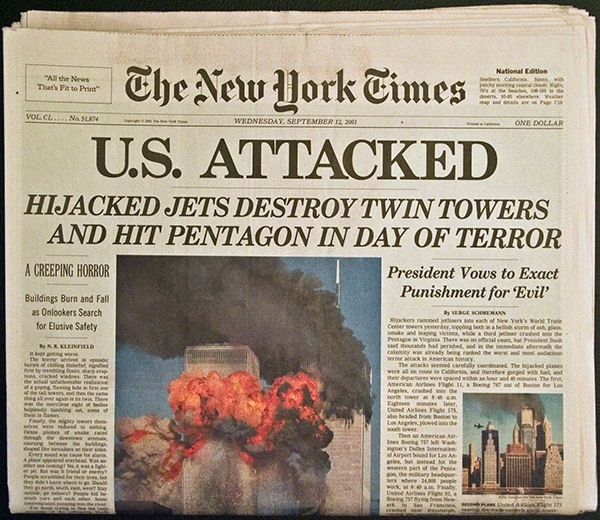 Today, on the 16th anniversary of the 9/11 neocon coup d’état, the New York Times editorial page has published a column by economist Paul Krugman calling the official narrative “totally false” – and accusing the Bush-Cheney Administration of “rejoicing” at the successful attack on America.

In the weeks and months after the atrocity, news media had a narrative about what it meant – basically, that it was a Pearl Harbor moment that brought America together with a new seriousness and resolve. This was comforting and reassuring. It was also totally false, literally from the first minutes.

The truth, as we now know, is that Bush administration officials rejoiced, even as the fires were still burning, at the opportunity they now had to fight the unrelated war they always wanted.” 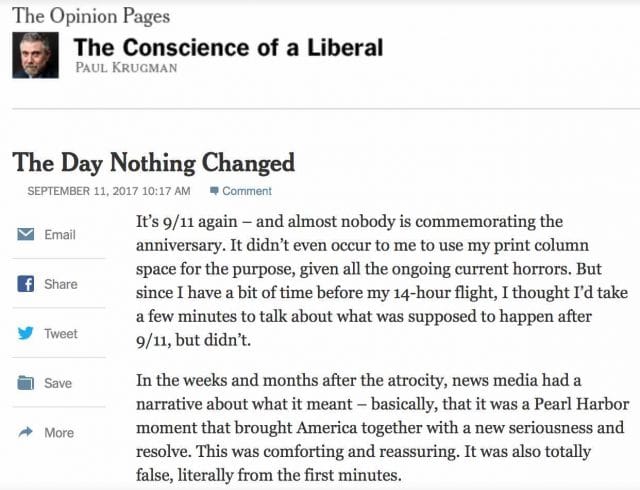 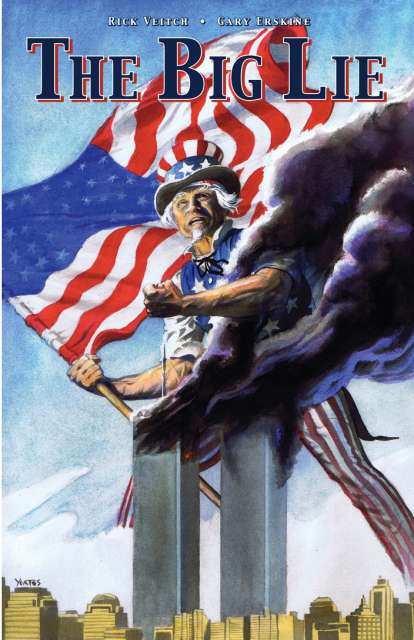 Krugman does not come right out and say that the Bush-Cheney gang “rejoiced” because they were celebrating a successful covert operation. Nor does he mention the many Israelis who were even more blatantly celebrating their New Pearl Harbor deception:

*The “dancing Israelis,” Mossad agents all, who according to the NYPD had been pre-positioned to film the attacks, and who photographed themselves cheering wildly and flicking cigarette lighters in front of the burning and exploding Twin Towers.

*Benjamin Netanyahu, whose first reaction was that the attacks were “very good,” and who reaffirmed that years later by saying “We are benefitting from one thing” – 9/11.

*Mike Harrari, the legendary Mossad chief, who threw a celebratory party and openly claimed credit for 9/11, according to self-proclaimed eyewitness Dmitri Khalezov.

From ex-Chief Harrari to its agents on the ground in New York, the Mossad wildly and openly celebrated 9/11. The CIA’s reaction was somewhat more ambivalent. According to CIA Iraq Desk asset Susan Lindauer, her Case Officer, Richard Fuisz —who had known ahead of time that a big terror attack would be hitting Lower Manhattan — was on the phone with her on the morning of 9/11 as live television showed the Towers burning and then, suddenly, exploding. Lindauer says that as the Towers exploded, Fuisz’s reaction was an anguished scream: “The goddamn Israelis!”

But just a few weeks later, Bush called a celebratory party at the CIA, broke out the champagne all around, reassured everyone that their jobs were safe, and called 9/11 “just a memory” amidst an atmosphere of relief and rejoicing. (T.H. Meyer, Reality, Truth, and Evil.)

What does “liberal with a conscience” Paul Krugman know about the Bush Administration’s (and Israel’s) celebrations of 9/11? Presumably more than he’s telling us.

Why won’t Krugman just come right out and tell us what he really thinks? Presumably because he knows the New York Times would never publish it.

So Krugman’s breakthrough op-ed — the most truthful assessment of 9/11 ever published in a leading American newspaper — uses the kind of double-speak championed by neoconservative guru Leo Strauss. According to Strauss, ordinary people cannot handle the truth, so “philosophers” (i.e. neocons) should feed them comforting lies…while at the same time letting the truth slip through, from between the lines, in such a way that the philosophers, who are careful readers alert to multiple meanings, will understand the half-hidden message.

Krugman passes the buck for his, and the rest of the liberal media’s, failure to report 9/11 honestly:

The thing was, people just didn’t want to hear about this reality.

*the Israeli celebrations (and huge pre-9/11 operation in America)

*the absurdity of the “hijackings” narrative

*the grotesquely un-Islamic behavior of the “Islamic extremist” alleged hijackers

…the American people would have listened, risen up, and overthrown an evil regime that was bent on shredding the Constitution, doubling the military budget, and bankrupting America with wars aimed primarily at genocidally destroying the Middle East for the benefit of expansionist Israel.

The biggest and worst failure after 9/11 was the failure of the media to report the facts. Krugman and the rest of his liberal media colleagues who dropped the ball are complicit in the worst crimes against humanity ever perpetrated: The murder of 32 million Muslims in a genocidal war aimed at utterly destroying the Middle East, the annihilation of American Constitutional democracy, the bankrupting of the US and global economies, and the wholesale shifting of scarce resources away from taking care of people and building sustainable infrastructure, towards ever-escalating technologies and practices of wholesale destruction and mass murder.

The CONSCIENCE of a liberal?! I suspect that Krugman is suffering from bad conscience, and the disguised doublespeak version of 9/11 truth that he is telling in the NY Times op-ed pages is the rather pathetic result.

I hope and pray that Krugman and others in similar positions will follow the lead of those who, like leading Islamic Studies expert Professor Khaled Abou El Fadl, have been driven by their consciences to speak more forthrightly about 9/11.