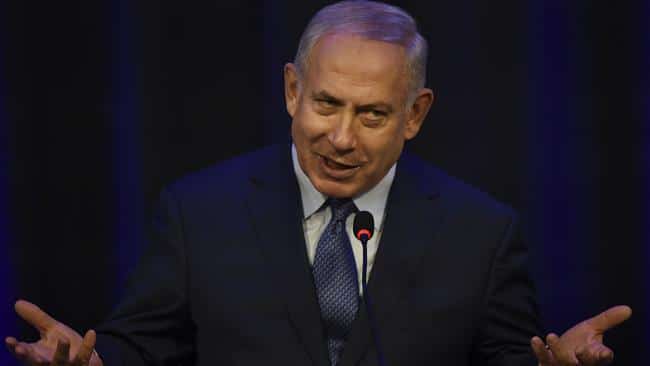 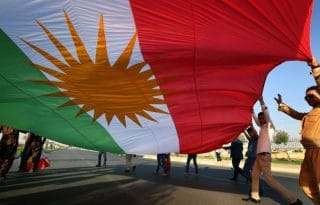 [ Editor’s Note: More in-your-face Netanyahu duplicity here, pushing for the Kurds “to attain a state of their own”, while he has always blocked such for the Palestinians despite the UN resolutions supporting it, and none for the Kurds.

But unlike the rest of us, Bibi does not have to worry about public opinion. His wife has already been charged with public graft, while hubby has two cases pending.

It’s amazing how Israeli law enforcement can prosecute high officials in Israel and yet, here in the US, Israelis and their Lobby friends appear to be immune, even from espionage prosecution. And, interfering in US elections is considered their national sport.

Despite the appearance of a squeaky clean reputation, the FBI is forever stained for having rolled over on this virtual no-prosecution of Israeli espionage, under the cover of its endangering national security – meaning that the Israelis can spill the beans on a lot of nasty things we have done with them which the public would be revolted to know.

But Americans also own a great deal of the blame, as the stories on this have been out for decades, but the public at large seems to be just fine with it all. US Christian Zionists, who give more money to Israel than American Jews do, figure that the more Israeli espionage the better, as that helps Israel, and the rapture will come sooner. Israelis consider them religious loons, but are happy to take their money and political support, where they give nothing in return.

Who in an official US government position would stick their neck out to do something about this when they know the public, or any of its institutions, would not support them? The same goes for the Congresscritters, who fear the Israeli Lobby more than the devil himself. It’s one hell of a sad situation… Jim W. Dean ]

Israeli Prime Minister Benjamin Netanyahu voices support for the formation of a Kurdish state in the lead-up to a planned independence referendum in Iraq’s Kurdistan region, which has sparked strong criticisms from the central government as well as Iraq’s neighbors.

In a Wednesday announcement, Netanyahu’s office said Israel supports the “legitimate efforts of the Kurdish people to attain a state of its own.”

The statement, however, noted that Tel Aviv opposes the Kurdistan Workers’ Party (PKK), which has long been fighting for autonomy in Turkey.

“Israel opposes the PKK and considers it a terrorist organization,” it said.

During a meeting with a delegation of 33 US Republican congressmen in mid-August, Netanyahu expressed interest in partitioning Iraq and establishing an independent Kurdish state in the country.

Netanyahu does not frequently speak publicly about the highly sensitive issue which also worries Turkey. The last time Netanyahu addressed the issue publicly was in 2014 when he said in a speech that Israel should “support the Kurdish aspiration for independence.”

Israel has a longstanding relationship with the Kurds, whom it regards as one of the few non-Arab allies in the area.

A report published in the New Yorker magazine in 2004 said Israeli military and intelligence operatives were active in Kurdish areas and providing training for commando units.

According to the report, Israel has been expanding its presence in Kurdistan and encouraging Kurds, its allies in the region, to create an independent state. The Kurdish referendum is scheduled for September 25, despite the strong opposition from the central government in Baghdad and Iraq’s neighboring countries.

On Tuesday Iraqi Prime Minister Haider al-Abadi rejected the planned Kurdish referendum on independence from the Arab country as “unconstitutional,” warning that the Kurds are “illegally” exporting Iraq’s oil.

The comments came a few hours after the country’s parliament overwhelmingly voted against the plebiscite, which has been planned by the Kurdistan Regional Government. The vote prompted Kurdish lawmakers to quit the parliament floor.

Several regional countries, including Iran and Turkey, are concerned that such a referendum could ignite a fresh conflict with Baghdad and possibly neighboring countries, diverting attention from the ongoing war against Daesh Takfiri terrorists in Iraq and Syria.