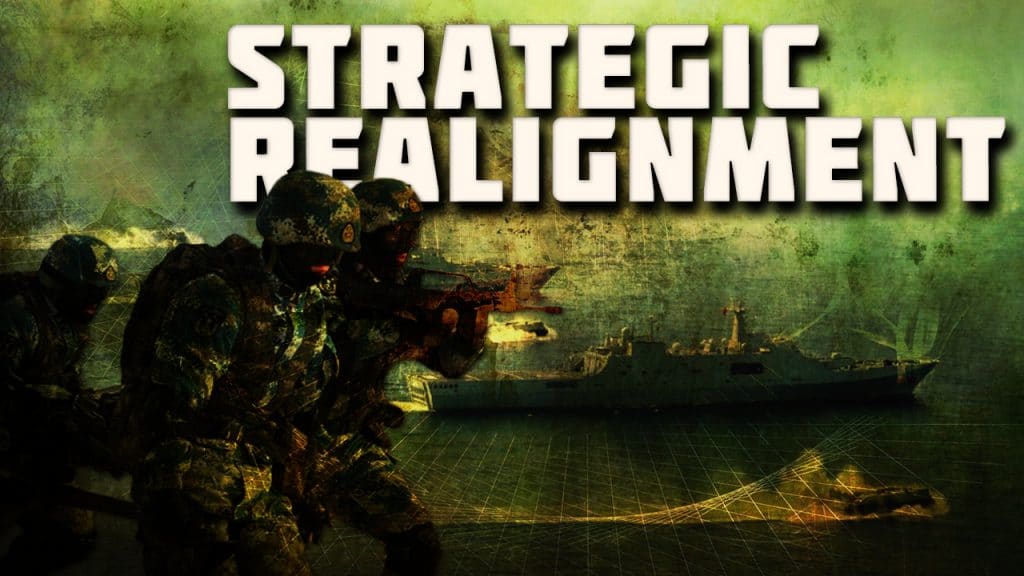 China has begun construction of the first Type 075 Class Landing Helicopter Dock (LHD). Construction most likely started in January or February of this year, with some satellite imagery and digital photos appearing online of at least one pre-fabricated hull cell. The Type 075 will be the largest amphibious warfare vessel in the Peoples’ Liberation Army Navy (PLAN), with similar displacement and dimensions as the U.S. Navy Wasp Class LHD. The PLA has also made it known that the force plans to expand the current PLA Marine Corps from 20,000 personnel to 100,000.

As China completes preparations for its new military base in Djibouti, located in the strategic Horn of Africa, it has also continued its substantial investment in developing the port of Gwadar, Pakistan. Not only will Gwadar become a key logistics hub as part of the China-Pakistan Economic Corridor (CPEC) and the “One Belt, One Road” trade initiative, but will also be a key naval base in providing security for China’s maritime trade in the region. When these developments are viewed in conjunction with the decision to reduce the size of the army by 300,000 personnel, it is obvious that China has reassessed the strategic focus of the nation’s armed forces.

The PLAN’s intends to expand the current force structure of the PLA Marine Corps fivefold, from two brigades to ten brigades. At the same time, the PLAN will be increased in size and capabilities, with many new, large displacement warships of varying types added to the fleet. Of particular interest, are the addition of at least two Type 055 destroyers, an indigenously designed and built aircraft carrier of a new class, two more Type 071 LPDs, and the first Type 075 LHD.

China is rapidly gaining the ability to project power and naval presence at increasing distances from its shores. Not only is the PLAN expanding in tonnage, but its new vessels are considerably more capable. The PLAN will be striving to add and train an additional 25% more personnel over the next half a decade, in an effort to add the skilled crews, pilots, and support personnel that will facilitate such an ambitious expansion.

The Chinese military leadership previously decided to double the number of AMIDs starting in 2014. A 100% increase in the PLA AMIDs and a 500% increase in the PLAMC denotes a major strategic shift in the defense strategy of the Chinese state. With the successful growth of the Silk Road Economic Belt/Maritime Silk Road Initiative, it becomes readily apparent that China must focus on securing and defending this global economic highway. China has made a massive investment, in partnership with many nations, in ensuring the success of a massive system of economic arteries that will span half of the globe. Many of these logistics arteries will transit strategic international maritime territories. In light of these developments, a military shift in focus away from fighting a ground war in China, to a greater maritime presence and power projection capability are quite logical.

China began construction of a maritime support facility in Djibouti in 2016, to protect its interests in Africa, facilitate joint anti-piracy operations in the region, and to provide a naval base to support long range and extended deployments of PLAN assets to protect the shipping lanes transiting the Strait of Aden. In addition, China invested approximately $46 billion USD in developing the China-Pakistan Economic Corridor, including major investment in the infrastructure of the port of Gwadar. The governments of both nations desire the stationing of a flotilla of PLAN warships in the port, and possibly a rapid reaction force of PLA Marines. Gwadar is well positioned to not only protect China’s economic interests in Pakistan, but also to react to any crisis threatening the free passage of maritime traffic through the Strait of Hormuz. The forward positioning of naval forces will allow the PLAN to protect the vital crude oil and natural gas imports transiting the Suez Canal, the Gulf of Aden and into the Indian Ocean from routes west of the Horn of Africa. In light of the fact that 6% of natural gas imports and 34% of crude oil imports by sea to China transit this region, the desire to secure these waterways becomes readily apparent. Not only would the presence of PLAN warships and marines help to secure China’s vital interests in Pakistan and the China-Pakistan Economic Corridor in particular, but would also afford the PLAN a base of operations close to the Strait of Hormuz. Approximately 51% of all Chinese crude oil imports by sea transit the strait, as well as 24% of seaborne natural gas imports. Any closure of the Strait of Hormuz due to a theoretical military conflict or an act of terrorism or piracy would have a huge impact on the Chinese economy.

Although the maritime trade routes transiting the Indian Ocean are of vital importance to keeping the manufacturing engine of China running uninterrupted, the South China Sea is of even greater importance. Not only does the region facilitate the passage of $5 trillion USD in global trade annually, but much of this trade is comprised of Chinese energy imports and exports of all categories. The geographic bottle neck of the Strait of Malacca, to the southwest of the South China Sea, affords the transit of 84% of all waterborne crude oil and 30% of natural gas imports to China. The closure of the strait, or a significant disruption of maritime traffic in the South China Sea, would have a devastating impact on the Chinese state. It is in the vital national interest of China to secure the region based on this fact alone. In addition, establishing a series of strategically located island outposts, covering the approaches to the South China Sea, affords China a greater ability to secure the entire region, establish Anti-Access/Area Denial (A2/AD) and defend the southern approaches to the Chinese mainland, while enforcing the nation’s claims to valuable energy and renewable resources in the region.

China continues to expand and reinforce its island holdings in both the Paracel and Spratly archipelagos. The massive construction on Mischief Reef, Fiery Cross Reef and Subi Reef will likely be completed later this year. These three islands, in conjunction with the surveillance stations, port facilities and helicopter bases located on a number of key smaller atolls, afford China the capability to project power and presence in the region at a level that no other regional or global power can match.

As China moves forward in expanding the PLAMC and the amphibious divisions of the PLA, it has maintained a swift schedule in shipbuilding which aims to provide a balanced and flexible amphibious sealift capability. China intends to tailor a modern and sizable amphibious warfare fleet that is capable of defending the growing maritime interests of the nation, and which can provide a significant power projection capability that can be employed across the full breadth of the Maritime Silk Road.

The first two classes of amphibious vessels that were seen as essential to design, construct and supply to the PLAN were the Type 072A class Landing Ship Tank (LST) and the Type 071 class Landing Platform Dock (LPD). There are a total of six Type 071 LPDs planned, with four currently in service and the fifth vessel reaching completion this year.

Plans to build a large LHD began in 2012, with a number of different designs contemplated. The class was known in intervening years as the Type 075 or Type 081. The Type 075 design was finalized and plans were made to begin construction in 2016. Although many analysts believe that the PLAN intends to build two such vessels, there will most likely be a need for one or two additional vessels of this class to meet the growing maritime security and power projection requirements of the nation. All signs point to the PLAN’s intentions of establishing two to three Amphibious Ready Groups (ARGs), as they have slowly and methodically developed a modern amphibious warfare skillset over the past two decades. They have taken a similar approach to establishing a modern carrier-based naval aviation arm.

From what is known, the Type 075 will displace 40,000 tons, have an LOA of 250 meters, and a beam of 30 meter. The Type 075 will be fitted with a large well deck, allowing for amphibious operations by LCACs, AAVs, and conventional landing craft. Each LHD could theoretically carry approximately 1,500 to 2,000 marines, a full complement of MBTs and AAVs (approximately 25-40 armored vehicles), 60 to 80 light vehicles, and ample cargo stowage space. The helicopter compliment will most likely consist of approximately 20 Z-8 transport helicopters, two Z-18F ASW helicopters, one or two Ka-31 AEW helicopters, four Z-9 utility helicopters, and possibly 6 to 8 naval versions of the Z-10 attack helicopter. With no VSTOL fixed wing attack aircraft in service, the PLAN would most likely opt for using a rotary wing attack element for the LHDs.

China has been slowly and methodically building the foundations of economic and military security and is offering those nations that cooperate as part of the New Silk Road/Maritime Silk Road a seat at the table. In order to create a mutually beneficial trade and transportation network, one that may soon supersede or compete against others, China must secure its vital interests, backed up by military force, and build a viable and sustainable naval presence in key maritime regions.

China has clearly signaled that its defense strategy is changing. The Chinese leadership feels that the sovereignty of mainland China is secure and is shifting focus to securing the vital maritime trade lifeline that not only ensures the security of the nation, but will allow China to increase its economic prosperity and trade partnerships with a multitude of nations.

Whether the United States decides to stand in the way of China’s growth or chooses to participate more constructively in a mutually beneficial relationship is yet to be determined. Without a doubt, China has set its course and will not deviate from this course unless some overwhelming force is brought to bear.

About Southfront
South Front
South Front
South Front: Analysis & Intelligence (SF) is a public analytical project maintained by an independent team of experts from four corners of the earth. SF focuses on international relations and crises working through a number of media platforms. They provide military operations analysis and other important data where crisis points affect tensions between countries and nations. They dig out truth barely covered by states concerned and their mainstream media. SF does not receive any funding from corporations or governments. They are supported by reader donations. *All posts on behalf of South Front are made by Gordon Duff
http://www.southfront.org
[email protected]